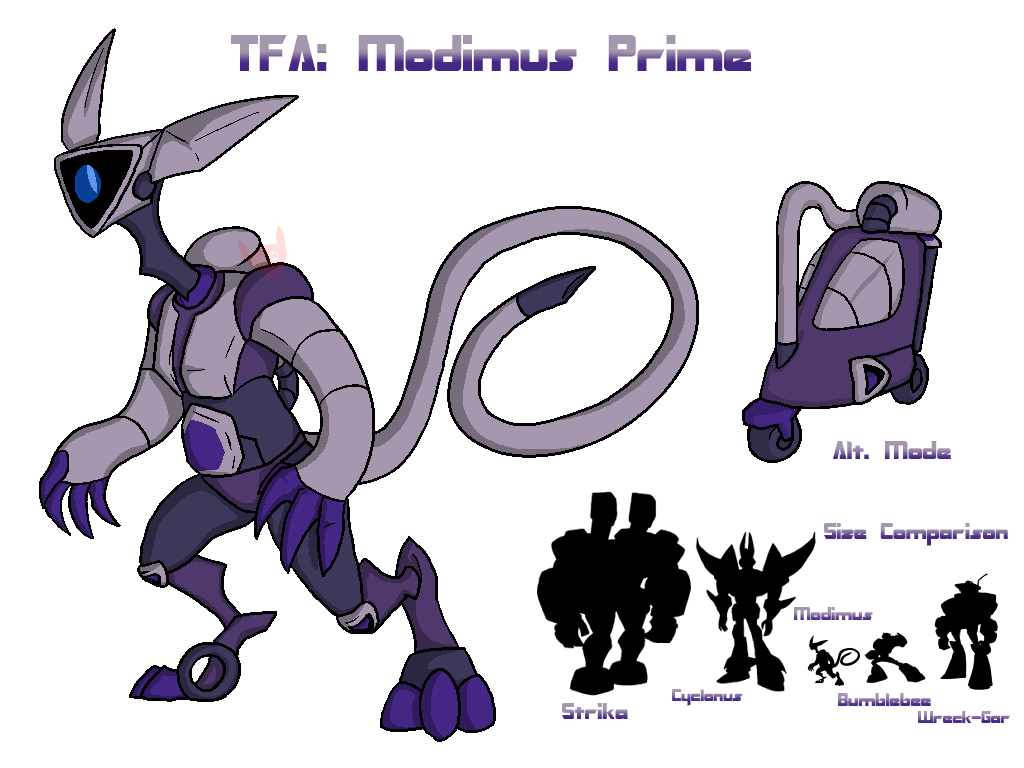 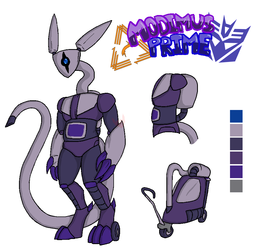 I wasn't going to make alternate versions of Modimus (my 'sona) but I ended up pulling a tfa version out anyway.

History/Personality:
Teaspoon has a procrastination code that just wont quit. Which is a shame as the rest of her usually does.
Her attention is hard to keep if it doesn’t revolve around some big scary monsters and has always been interested to poke around on these weird organic thingies people are always complaining about.

Teaspoon was interested in joining the elite guard and earning a real ‘Prime’ title but after seeing all the fighting and physical activity involved she decided… “Naahhhh” and attempted to push her frustrations at her position in life out of her processor rather than confront them like a normal bot.

Then, while performing janitorial duties aboard the ‘Steelhaven’, Sentinel stepped on her tail and she told him to go give the stick up his aft a friend as she threw her mop at him announcing that anyone could be a better Prime than him and named herself one just to spite him (it holds no real weight).

Thusly she abandoned her post there and bummed around space for a long while before becoming cheap (see: unpaid) labour for Swindle. Then again Swindle didn’t care, having a small ‘bot around just made him seem more ‘trustworthy’ to some punters regardless of if she did anything or not.
Though he liked her style even if a ‘pouch’ was a gross way of referring to her abdominal storage unit.

During many of his ‘sales’ to the many ‘con groups dotting the outer rims of the Galaxy, Modimus caught sight of Team Chaar, and decided she’d much rather follow them taking a lot of interest in the horned guy in particular.

She now serves as Team Chaar’s so-called ‘janitor’, though she barely does any cleaning at all and just bums about as a hang-out buddy for when they’re off duty.

Notes/Extra:
• I wasn’t originally gonna make her a form for different continuities, feeling that her base form was ‘general’ enough to be a bit of a ‘catch-all’ but I thought I might as well give it a go.
• Her “Pouch” functions like the storage Swindle has and she commonly pulls out weird and bizarre items from it.
• She’s Aro/Ace, her interest in Cyclonus merely goes as far as ‘she thinks he’s fucking badass’.
• Her tail can still vacuum stuff up in robot mode.
• Given how all of Team Chaar is at least 5 times bigger than her, said tail often gets stood on. She ends up holding it up like a squirrel a lot to avoid this.
• Likes kaiju movies and often plucks one out of her pouch if the slightest mention of a movie night is heard.
• Ultimately ends up on Earth (probably) and becomes trash buds with Wreck-Gar