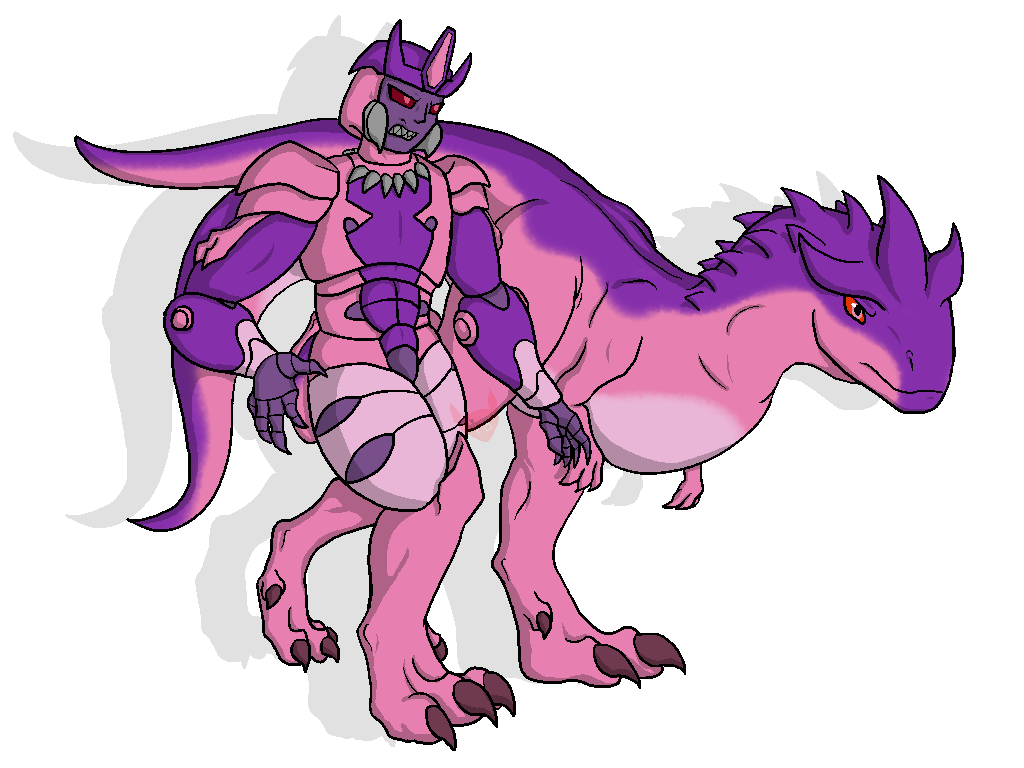 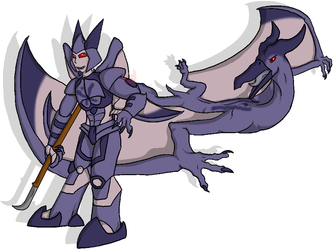 Alt mode: Carnotaurus
Backstory:
Way back on Cybertron, Megatron desired a stasis pod, and yet to concoct his grand disk-stealing scheme he tried out something new, a protege to be exact.

Invading and making security notes on one of the few, if only, places to still retain a protoform stasis pod - a Maximal facility - the Predacons retrieved a fresh pod barely even registered yet, Megatron had Tarantulas decode the device and activate the protoform. Before any of his men could ask what in the Pit he was doing Megatron held the pods scanner down, forcing it to scan him.

Gleefully taking his new protege under his wing Megatron instilled everything he could into the new Predacon, training him and telling him all about the Maximal scourge. For a time things were looking good, Galvatron was adapting well, even getting along with the other Pred’s well, taking a shine to Waspinator and Skorponok’s friendliness and, much to Megatrons endless amusement, to burning the tips of Terrorsaur’s wings in battle simulations. Yes, he’d make a perfect commander while he was away and keep things in check for his triumphant return.

Until his fighting got sloppy, Galvatron started getting into a problem of letting his emotions get the better of him in battle and began getting injured far more.
Furious at the sudden set of failures Megatron took to improving Galvatrons battle rate himself. No matter the injury.
Already getting emotional, now getting beaten up and insulted by the one you looked up to?
Well that was just the perfect set up for a quite ugly relationship.
Anytime the duo were around each other it invariably devolved into bickering, arguments and physical violence until Megatron renounced him as a lost cause and got rid of the thorn in his side somewhere among the streets of Cybertron.

Still clinging on to that anger and need for revenge until the bitter end Galvatron never gave up on chasing down Megatron, to finally beat him and prove he was not worthless trash to be thrown away.

So when Megatron left Cybertron’s atmosphere Galvatron surely followed, riding the transwarp energy to prehistoric Earth along with them, crashing and obtaining a new alt mode too.

Galvatron found the Predacon ship quite easily and as luck would have it, Megatron showed up.
Unimpressed at his “rejected failure of a protege” tailing him all this way another battle ensued, Galvatron was easily beaten as he refused to transform even as he neared stasis lock from the Energon exposure. He was only just spared upon transforming and fleeing with his injuries at 10% power.

And now Galvatron was left to scour the Earth still bitter and always clashing with Megatron whenever they met. The best thing in his favour being his emotional instability worked well with his beast mode allowing it to fight feral-ly and brutally with more savagery then previously managed. Sadly it was still mindless fury and he inevitably got defeated time and time again by better plans.

Galvatron still raided the Decepticon base for supplies whenever he needed however, Skorponok and Waspinator knew he did this but often turned a blind optic. Tarantulas had knowledge of it too, but hey, a potential pawn is always of use so he left the pink Carnotaurus to his business.

Out in the wilds, Galvatron soon figured out he was not alone, his ramshackle shelter near a waterfall was continually destroyed.
Eventually Galvatron caught the perpetrator to this crime in the form of a colossal flying dinosaur. Upon spotting him
“THIEF”
It yelled and swung down on the theropod with cold efficiency revealing it’s true Predacon form.

Tired and lacking energy from spending so long in his beast mode he wheezed and eventually keeled under the stronger warrior’s power, but not before taking an arm off.

Finding many a lucky break but only once he’s in desperate need of saving Galvatron awoke to find himself in a shielded ship finally in robot mode after an age.
The ship was pristine and well looked after, decorated like a temple, but more importantly, hidden and heavily fortified.
His host, the temple’s guardian, leveled himself and his situation to his guest.

He was Cyclonus, he’d been here a while, this place held a old Predacon relic and he was sworn to protect it.
Yet by his code of Predacon honor he could not allow a fellow warrior to die anywhere but battle and allowed Galvatron to live, citing that he surely was no thief, not in his condition. Not with a paint job like that either.

As much as Cyclonus initially detested having a potential leak, betrayal and enemy close to his ward he found the stubborn theropod was usually back by the end of the day anyway, claiming a - now messy beyond repair - room for his own. At least Galvatron was good with repairs and creating workable fixes from the most bizarre of supplies.

Galvatron’s path met with Megatron’s many a time, each time desperate to destroy him, each time returning to his new home with injuries he refused to explain or treat, each time only worrying his host.

He wasn’t sure when Cyclonus had suddenly begun to welcome him back with open servo’s and be less of a loyalist prick when it came to Megatron. Though the lighter attitude was obtained after the flier encountered an old friend who backed up Galvatrons words.
It was just nice to finally be able to talk more, it really made you realise how lonely being a street urchin could really be.

Galvatron was near the Predacon base when the alien weapon had gone off, initially just another run for supplies and to steal things just to annoy Megatron, Galvatron had gotten distracted helping somewhat-friend Waspinator get de-cubified then lost in a cavern.

Shielded from the burning heat of the budding weapon by the base above; Galvatron was nearly taken by a lava flow as several of the super-hot pools around the Predacon base cracked and seeped freely. He was left cowering in an Energon encrusted cavern as the remaining energy-aftershocks shook the place.

Feeling sick and woozy from the energy Galvatron had to follow a new lava stream in order to escape and return home.
In the lava flow Galvatron found a hand, risking the heat he pulled it out, Two bodies almost melded together flopped to the dry earth several miles away from the base.
Pulling at the strange bubbling substance that surrounded them Galvatron discovered the mutation and build up of transmetal had been triggered by the energy released from the alien weapon. The substance had, instead of augmenting the body, collected around the outer-layers in a desperate attempt to survive.
Alive and now unaffected by the transmetal, remaining in their original forms, Galvatron could do nothing but drag Skorponok and Terrorsaur back to his home.
Fearing what the next encounter with Megatron may bring, especially if he had taken on the transmetal power too…

Personality:
Galvatron is stubborn, confrontational and hates the idea of rules and will buck them whenever possible.
He acts like a loner and refuses help when offered, but due to abandonment issues he's also obviously clingy and doesn't like being left alone and panics when people are gone for longer than he mentally thinks is 'right'.
He has abandonment and "daddy" issues and believes winning in battle will 'redeem' him, all while vehemently denying that he really just wants the approval and love he never got.