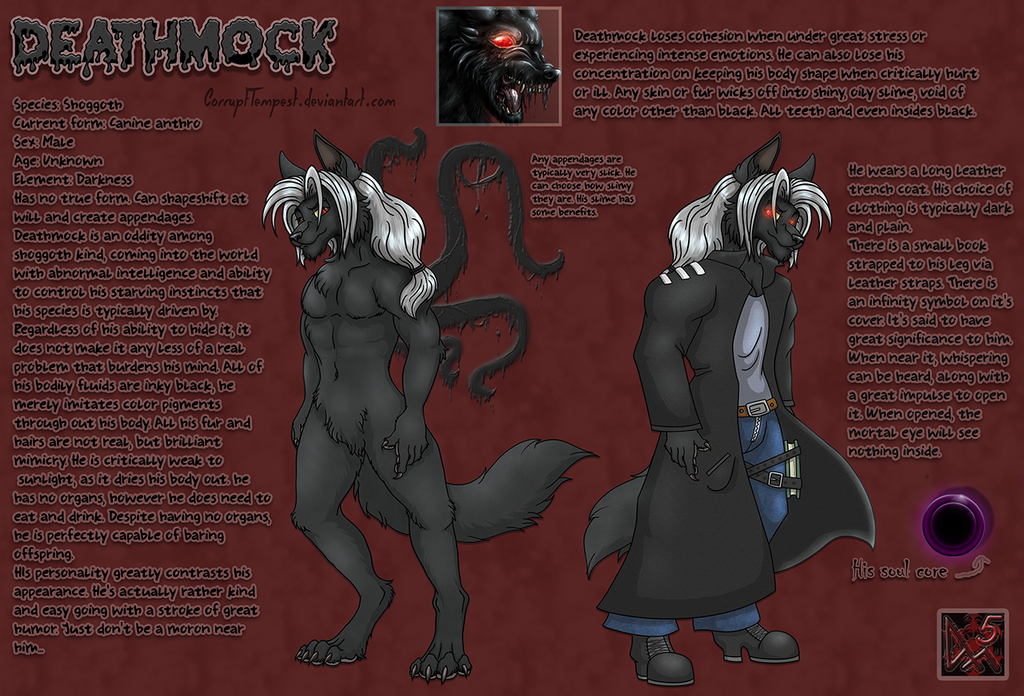 To celebrate my return and warm up, I drew the fursona of my favorite man in the world. Which I'm happy to announce, is officially my husband! ^_^
It's about time he gets an upgrade, if you can call it that, considering I haven't drawn in three years and have been left rusty due to it.
He use to be called just a 'slime'. Which he is. But slime is such a vague term. Our old Dungeons and Dragons master brought up the term Shoggoth, which seemed to fit well. Besides, he is obsessed with H.P. Lovecraft's writings, I find them interesting too.
I'll refer to him as just a slime sometimes. So... learn more about our take on this species...

.:A Little About Slimes:.

Slimes need a lot of water to stay healthy and active. They rarely eat, and could live without eating at all. They are made of essentially nothing but water with a few other minerals. They can take in minerals from the earth they walk on when needed. It's very difficult to tell them apart from a normal creature when they are mimicking. One give away is their constant consumption of water, acting hesitant to remain outside during the daytime, hardly eating, never sleeping, and wearing long water proof coats.

Slimes are not typically intelligent. They are creatures completely driven by beastly instincts. Deathmock is a rare mutation. These creatures originate from a plain of unspeakable horrors. Deathmock says he remembers when he first opened his eyes there... he was mortified by what he witnessed. He wandered there for years, completely unhappy and fed up with his 'people'. Most couldn't speak, some couldn't even move, and nearly all of them would try to eat each other. Shoggoths aren't exactly the friendliest of creatures. Their eating of each other was a type of competition of sorts. They were hungry for power and rank, and evolved in real time. Eating others meant absorbing their knowledge and abilities. Deathmock can't remember how he came to be or how he is self aware. He fears that maybe he absorbed so much knowledge that he became self aware that way? His home world bored him and made him sick. He crafted a device that could rip through the very fabric of space and time, a scythe called Reaver. He escaped the ancient plain, and found himself in the realm of mortals. A new hunger was aroused within him now in this new world. However he would be disappointed by the new creatures here too for years to come. Until he meets a non judging young lady.
Deathmock obtained his ability to control darkness somehow after he traveled in the void between worlds. It has permanently affected his soul core in some mysterious way. His soul now glows a creepy violet color.
He can not remember being a child at all. His apparent age seems to be late 20's. However he could be hundreds of years old in shoggoth years.
He has no specific form, he is currently taking the form on a wolf to the liking of his mate.

Slimes do not have organs, however they so have a 'soul'. This soul is housed in a glass like orb. Slimes are very difficult to kill. However they could be destroyed if you crack or do harm to their precious soul core. Intelligent slimes often gift their soul core to their trusted and faithful lovers, giving a whole new meaning to 'soulmate'. He can still live on without the core being directly inside him. When a slime hands his very soul to his mate, he is trusting her with his life. In return, he is practically immortal, and will protect her with all he has. Their core is responsible for all their emotions, animations, and thoughts. Slimes without a mate sometimes keep their core hidden away in a wooden latched box. When dehydrated, it is possible to bring a slime back from death, but it's an exhausting process that requires a lot of compassion and attention.

His particular species of slime are all males. They do reproduce. They choose fertile females of other creatures to implant a part of themselves into, which latches onto her egg and forms into another soul core. Both parents participate in the mixing of DNA like any other animals, however the baby will always be a shoggoth as it is more dominant. The mother goes through a rather typical pregnancy. During gestation she has a very abnormal appetite and needs to eat much more than a regular pregnant woman. They also drink much more water than usual. During pregnancy the female may be much more 'frisky' than usual. After a few months she gives birth to a smooth soul core the size of a tennis ball. After birth they are rather hearty, growing on their own just fine. Within a few days the core oozes forth it's 'flesh' (slime) which rapidly grows when fed more. When they gain their slimy body, they will typically shape-shift into the first thing they see as an instinct... so this means that offspring usually take appearance from their parents. The offspring will inherit their own solid color, usually after their daddy. They can however mimic other colors with some practice. Slimes can be completely independent after a week of being born.

They can loose control of the shape of their body when under stress or experiencing intense emotions. Awkwardly enough, this includes arousal.
The slime on their body has an aphrodisiac effect on the mind and body when touched, sending quivers of pleasure and need throughout the body. Behaved slimes try to hide this, as to not bring attention to themselves, and avoid bringing every lady in contact with them into an unbearable heat...

I may add more onto this later.