Mellita shuddered as the freezing air crept through the cracks in the wood of the wher-pulled wagon she and two other Singers were trapped in. She was the only one over twenty; the other two were still girls, and had only just begun to show the signs when the Lord Holder's guard snatched them up.

She could still taste the blood from where one of them tried to remove her tongue, just before a force of wherhandlers with tattoos supported by Spells raided the camp and slaughtered the guard in order to take all of the Singers they had held captive.

The Wher Lords, she had heard the older women call them before they were separated into groups based on some arbitrary measurement she hadn't figured out. She remembered tales of them; some called them outlaws that acted as forces of justice, while others painted them as depraved animals, and yet others said that they were just a gang that happened to have strict laws for its members.

Given what little had happened in the days that passed since the raid, she was inclined to think of them as the third option. They were given care to keep them alive, and the women sometimes visited to check on them, but they were otherwise treated as if they didn't exist. Mellita wasn't sure if this was a good or bad thing; they were being taken somewhere far from her home hold, where the air was thin and cold, as if spring hadn't touched it yet, but she didn't know enough to know where that was; there were a lot of mountains in the north, after all.

There was a muffled sob from one of the girls huddled behind her; the younger, she thought. She had just turned fifteen turns, if she understood her shaking hands correctly, and had been found out because she went mute after a high fever--classic Singer maturity. Poor kid. The older was quieter, more prone to staring at nothing, and cringed at the sight of men holding metal.

She had had her tongue cut out.

She didn't know either of their names; neither was in a state to tell her, and while the older girl (pale, possibly from blood loss, with dark hair and eyes) could write, neither of the others could read.

There was a sharp shout from the wagon driver; it was too muffled by the wood to make it out, but the sudden stop made it clear what he'd said. They had arrived to wherever they were supposed to go. A woman opened the wagon, making all three of them flinch away from the sudden light. A bundle was thrown into the wagon; it was thick coats and boots, of the sort suited to mountaineering.

"Put them on. The Wher Mother doesn't like being kept waiting."

Her stomach dropped, but she obeyed as quickly as she could, and helped the others. They staggered out of the wagon, and as their eyes adjusted, they saw where they were for the first time.

They stood on a cliff next to a massive lake, with hints of upwelling beginning to tint it ichor-green. The area was lush and full of signs of wildlife; there was no evidence that any human lived there.

Mellita was shoved by one of the women (a bluehandler, given the wher by her side), and meekly obeyed the implied order. She hurried to follow her captors, and was faced with quite possibly the biggest wher she had ever seen. He was massive, a gleaming bronze where his hide hadn't dulled with age, and looked utterly unimpressed by the group in front of him.

The bronze stared them down, and spoke at them, making all three jump out of their skins.

:Nikolask told to carry humans. Get on before Nikolask eats.:

They didn't need to be told twice; Mellita was the first to climb on, and she helped the other two to get on the wher's back. An ancient man in a wheelchair gestured into the cavern, and Nikolask placidly trotted into the cave, like he was a Lord Holder's pet lapdog and not a massive guardwher.

The cave was initially well-lit with glowbaskets, but soon it became far too dark for them to see anything but the occasional hint of light from other tunnels. Nikolask didn't care, and occasionally hissed at his passengers when they tried to do anything but sit still and stay quiet.

Mellita didn't know how long they had been riding Nikolask through the caves when she felt him pick up speed and huff with excitement. The path he brought them down was very slightly brighter than the rest, and she could just barely make out the silhouette of a person in it.

Nikolask snorted; he seemed to have told the person something, and she faintly saw a nod. "Makes sense. Well, bring them along; no point letting them off you yet."

The wher's sides heaved as he sighed, but he obeyed and followed the person like a puppy. It was... weird. No wher she had ever seen was this tame with anyone who wasn't their handler, and metallics were that much less so. What made this person so special? It frightened her, a bit; if their captors had someone who could hear dragons, they had no chance of rescue.

Nikolask trundled to a stop after several minutes of walking, and carefully laid down in a way that wouldn't dislodge his passengers. He grumbled a bit, but did nothing about whatever was annoying him. Probably them, she thought; most wher lines weren't fond of being touched by strangers.

"Get off, Singers. Nikolask, go back to Uncle."

Mellita hurried to dismount and get the other girls off as well. The second they were all on the ground, Nikolask surged to his feet and ran back the way he had came... leaving them alone with this stranger who bossed around whers.

There was a faint rustle of hair and hide from where the person stood, and a few soft words sung to bring light, however dim, to the tunnel.

The person was a woman, a Singer, so short that she would have looked like a child were it not for her build; her stomach was bared, showing a vivid wher tattooed into it, and there was an intricate tattoo of the same color on her left forearm. She was turned away from them, so Mellita could not see her face, but the leather straps on her head must have been holding an eyepatch. The woman gestured for them to follow, and began to walk off, bringing the light with her.

Not wanting to be left in the darkness, all three ran after her. There was nowhere to go but forward now, no matter how much it scared them.

It took a long time (Mellita didn't know how long; certainly more than an hour) before they arrived at their destination. The Singer sang another spell that put out the lights following her, and opened the door before her.

It was better-lit than the corridor, and brighter than the woman's lights; still dim by most standards, but bright enough that Mellita could actually see most colors. It was a welcome change after the darkness of the rest of their trip through the caves.

The Singer turned to look at them, and Mellita's mind stopped when she saw the woman's face. Her face was flanked by a pair of scars that each went from the corners of her mouth to her ears, horribly prominent on her pale skin. A wher's grin flickered through her head before she realized the woman was speaking.

It was the younger girl, the one who had seemed the most timid, that protested. The Singer was unimpressed by the outburst, and continued as if the girl hadn't spoken.

"Since you are the healthiest three, you will probably be Marked first." She paused, tilting her head and idly rubbing her facial scars. Her next words were quieter, like she was thinking out loud. "Might be right now, if the tattoo artists have arrived. You're a little early, though..."

She turned on her heel, completely confident in their obedience. For a moment, Mellita considered disobeying, but then she thought of the woman's scars, her effortless power, and her casual command of whers taller than her and followed, making sure to bring the other two with her. They went into a hall and pass several rooms, all well-worn and spartanly decorated, before the woman unlocked one that had been closed and gestured them inside.

Mellita hurried to obey, but the other two were more stubborn. Likely they weren't familiar enough with whers or other Singers to notice what she had.

"Children, I am losing my patience. Get in, or be made an example of."

Her voice had turned from warm and casual to full of cold fury in an instant, but her face was unchanged save for some small strain around her visible eye. Mellita moved to grab them and force them into the room, but the woman shoved her back with a strength that belied her small size. The younger broke at this, and meekly went inside, but the older simply froze in... terror? It wasn't quite right, but the woman recognized whatever was going through her face and sighed, before gently leading her into the room as well.

Once the older was in, the door was closed and locked behind them, leaving the trio alone with their pain and fear once again.

From outside, they heard the woman speak again, this time sounding a bit tired.

"...I am the Singer Aleksand. The dark red-head is Ranai, the pale black-haired girl is Torka, and the brown girl is Mellita. Do not forget this; I will not tell you again."

Well. Whatever Spells she had sung had given her more information than they could give each other... somehow. The wher certainly hadn't cared about who they were; what else could it have been? Mellita sank to the ground (worn stone, but with a multitude of rugs and blankets rolled up in the corner; it felt frequently used), and tried to collect her thoughts in the light of the glows. The older girl--Torka, Mellita reminded herself--continued standing, but Ranai moved to the pile of fabric and started dragging them around to rearrange them. She was clearly still rattled, but the effort seemed to calm her a bit.

At the very least, it was better than doing nothing. Mellita scooted to her feet; it was difficult, with how weak her legs felt, but even that took her mind off their bleak situation. It was all she had, in a room that was little more than a nice prison cell and no prospect of escaping. 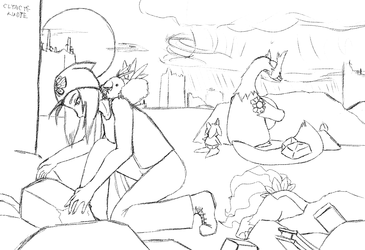 XaaaCi Pern: Those Who Are Taken 1

Some writing for my Pern AU, XaaaCi. The second ?half? isn't finished yet, otherwise I'd have posted it as one work. The point to this one was establishing Aleksand's character as seen by an outsider; she looks a lot more competent from the outside, where you can't see her brain problems. This is only half a decade or so prior to the point that the actual RP was going to be set at, for the curious.

Not crossposting to AO3 since it's so heavily AU that I could probably get away with publishing this if I scrubbed for fandom terms.

Probably going to need to take a few minutes to fix borked formatting, as a warning. Every site I use has different formatting i s2g...

how to get your fix of a fandom you fucking lovehate: au fanfic