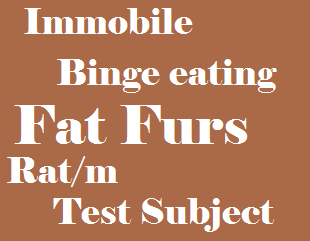 Phew, finally managed to crank out my part of the trade with ed_shapeshifter before I started working on the reward for the contest. Ed volunteers at a testing facility for some quick cash, and let's just say he's in for a big surprise~

Ed stared at the building in front of him, swallowing hard as he took in the picture in front of him. Across the street stood a massive 10 story tall foundation made seemingly completely out of glass, the letters "FITX" erected just above the entrance, each letter nearly 4 feet tall. Compared to the smaller, less-imposing structures nearby, the 180 pound rat was bound to feel somewhat intimidated by the sheer size of the FITX building alone. Upon inspecting glass structure further, Ed let out a small shudder, feeling something very… unnatural about the building in front of him. He knew what he was getting himself into, the newspaper article he read earlier didn't cut corners. He was to walk into the building and volunteer for testing. Once inside, he will be led to a small dorm which will serve as a temporary dwelling for three days. As soon as time's up, Ed will be paid handsomely and released without any side effects… hopefully.

With a mighty gulp, Ed crossed the street and strolled up to the building, waiting for the automatic doors to open before walking in. Once inside, however, the young rat froze in his steps. Considering how threatening and bleak the outside of the facility looked, the lobby looked very… comfortable! The floor tiles were a light tan shade, similar to his own tan fur, with several swirly patterns livening up the ground. The walls and ceiling all complimented each other beautifully, the primary colors blending into secondary colors towards the corners. While Ed wouldn't have chose this particular color scheme, he had to admit it was much better than the dull grey corridors he had pictured earlier. Feeling a small boost of confidence, the young rat strode up towards a desk located near the back of the room, ringing the bell once.

"I'll be there in a sec, hun!" a voice called out from inside the door across the desk. A small scuffing noise was heard behind the counter before a tigress suddenly popped, surprising the apprehensive rodent. Ed jumped back and squeaked, holding his paws against his chest defensively before relaxing. "Phew, you scared me. I wasn't expecting a…feline to suddenly appear," the small mouse said, his neck fur still sticking up. The tigress just smiled warmly, as if used to other rodents getting spooked by her appearance. "Oh, don't worry, I'm quite used to it. Please, call me Kate." The tigress responded, holding out her paw. Ed looked down at the paw, hesitating for a brief second before grabbing her paw and shaking it firmly. "Nice to meet you, Kate. I'm Ed," The rat responded, feeling more assured of himself. As soon as Ed mentioned his name, Kate's eyes sparkled a bit. "Ah, we've been expecting you, Ed! Please, come with me and we can began the tour." The tigress said softly as she strode to the back door, beckoning to him.

Ed unconsciously held his paws to his chest as he slowly walked through the long, branching corridors, following Kate as she led him deeper into the large building. "As you can see, it's pretty easy to get lost in here. If you ever need to move from point A to point B, please let us know immediately. Who knows how long you could get lost if you left without a guide!" Kate explained half-heartedly, suddenly taking a sharp left turn through another doorway. "Gotcha," Ed responded as he rounded the corner to catch up to Kate before suddenly stopping in his tracks, a cold wave of fear washing over his heart. From here on out, the cartoonish colored hallway transformed into the grey, bleak nightmare Ed had worried about. From floor to ceiling, the entire path in front of him was a dull grey, making hard to distinguish when the ground and the walls met. Not a single window was present throughout the hallway as well; the only light radiating from grey ceiling fans.

Further down the halls, Ed noticed a few of the doors had small windows leading in. Peeking through, he caught glimpses of other rats like him, but with severely different body shapes. Through the first door, Ed noticed an extremely muscular white rat with red eyes. His veins were practically bulging out of his body to the point where Ed swore he could see the blood flow. Due to his outrageous body size, the light brown rat guessed he needed a lot of outside help just to maneuver around. The next room featured a small, black rat with dark eyes. In contrast to the previous rat, he was totally skinny, with not an ounce of muscle or fat clinging to his boney body! It was almost terrifying to see a member of his own species be reduced to skin and bones. The worst part was Ed could even see his chest pulsing in and out from his heart beat! This was getting too weird…

Before Ed could question where he was heading, Kate stopped abruptly by a vacant door, jingling the keys as she unlocked it. "Ah, here we are, your new home!" The tigress smiled again, this time showing a bit of teeth. Without question, the rat slowly nodded and weakly smiled back as he hesitantly stepped into his new room, looking around. Sure enough, the entire room was completely grey, just like the hallway. Despite the dull color, however, the room look more than commodious for Ed. At the far left end of the living room-sized area, a large king-sized bed laid against the wall, the plush sheets were, you guessed it, grey. While the room was about as bland and boring as a room could be, Ed couldn't help but feel like something was off. One of the walls looked slightly… different. The rat couldn't really describe it, it just looked strange, perhaps transparent? "One last thing!" Kate suddenly exclaimed, breaking Ed from his emersion. "You'll have to wear this to identify yourself as a test subject here." As she spoke, the tigress pulled out a small orange and black spandex suit from her seemingly bottomless purse, handing it to him. Staring at it curiously, he slowly lifted his leg into the first hole of the suit, slowly putting the form fitting, rubbery clothing on him. Out of the corner of his eye, however, the rat noticed a slight shadow move from behind the strange wall! Right when Ed turned around to question it, however, he heard the sound of the door shutting shut and the clinking of keys locking up a metal door. "Well," Ed said to himself as he stared at the strange wall, "At least I'll find out what kind of tests I'll be doing soon… hopefully."

As if on cue, Ed suddenly heard the sound of machinery grinding the moment those words escaped his lips, causing the surprised rat to squeak in shock. One of the panels alongside the far wall started to slowly drop down, resembling a diving board-sized tray covered with… "Cheese?!" Ed exclaimed as he quickly scampered over to look over his favored food, inhaling the aromas of multiple different variants of the dairy products, including Provolone, Cheddar, Swiss, Parmesan, Babybel, Mozzarella, and Smoked Gouda, just to name a few! Taking back any negative thoughts he had of this establishment, Ed eagerly grabbed a large pawful of the nearest cheese and began to stuff himself silly, his mind going completely numb over the overload of flavor. Paw after paw of the cheesy goodness were crammed down into his greedy maw, his brain focusing only on eating the rare delicacies after walking for what felt like hours. Knowing how rare of an occasion it was to eat such varied cheeses at once, as well as noting the vast quantity of said cheese, Ed started to feed himself even faster, barely giving himself time to breathe. Crumbs began to pile up around his lips and snout, the pieces of cheese seemingly bouncing off the rest of his latex-covered body.

All too quickly, Ed's massive dairy meal ended as the stuffed rat gobbled up the remaining cheeses, burping loudly as he hel