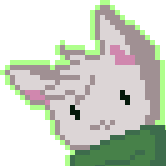 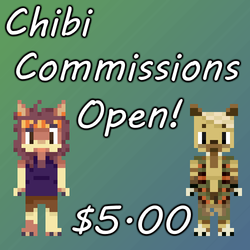 The Ether Blade. A peculiar artifact recovered by AuTek Enterprises International by their research team. No details were ever publicly released to its whereabouts where it was found, but it's supposedly a blade from an entirely different world, long lost to the cold vastness of space. It seems to be reactive in the hands of those with 'powerful minds'. What this means is unclear, or if it's just superstition surrounding the blade. It is a strange weapon that can materialize its blade or dematerialize it, reducing itself to nothing more than the hilt and two perpendicular handles. With its blade present, the weapon strangely resembles an elongated tonfa sword.

I drew this a while back for

ArkRotarl, though I've only just now posted it because I'm in the mood to share a lot of my pixel art furry or not.

Art was drawn by