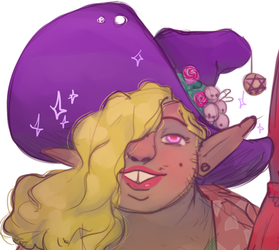 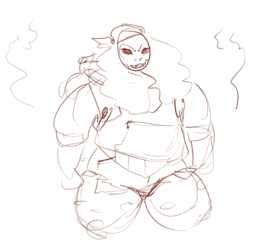 Revisited Cherise a bit and gave her a pal, Rosmund.

They are both splicers living in The Sprawl, a horrendous space-graveyard the size of jupiter where multidimensional debris from all across the Existance ends up. People live as scavengers in the wrecks of old ships, scrabbling in the remains of countless civilisations to make a living, and hiding out in secret Hab modules where they grow mushrooms and try to understand the secrets of the past.

Cherise is an adventurer who possess special implants endowed to her by an encounter with an Ancient machine that allows her to interface with computers and learn their secrets. The device that she wields is a mutant bioweapon from another dimension that spews plasma and nightmares, giving her a formidable edge against the horrors of the Sprawl. Due to her scrawny build she is wary of anything but light-g areas of the sprawl as she prefers to bounce away and hide rather than fight.

Rosmund works as a guard for one of the caravans that carries food, water, and necessities between Habs. Her whole combat style demands her to be big so she can throw her weight around, especially in weightlessness where she’ll dropkick and bodyslam you around, using that hook-staff to get leverage. She has to eat and exercise a lot to stay in shape, and trains to fight in both low- and high-g enviroments.