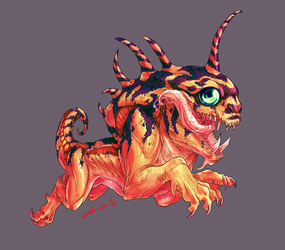 I was messing with designs and what not of my Salarians. I meant to make headshots of ALL my Mass Effect OCs but that is currently on hold. In any event...copy pasted bio information on these crazies.

"SO I finished my Salarians. YAY. All four of these blighters are part of my head canon Merc Syndicate run by my fancy Turian Lady, Spiira.

When I do full bodies one of these ‘ere days they’ll have the insignia, BUT FOR NOW…head shots.

This was also to try and figure out what I want out of coloring for myself. The headshots of Saris and Spiira were the first set.

Rhel being the first I worked on with this bunch, I started changing it up and figuring things out by the time I rolled around on the last two, that being Arexxial and Izra. I like to think it is very obvious. Especially if you compare the old head shots I did of Rhel and Ebri (at the time still dubbed Arexxial).

Izra’s colors I wasn’t sure on. I just know he has a “peacock” sorta coloration going on as a base then the black and yellow markings. I mixed up a bunch of Poison Dart Frogs. He really likes mind games but doesn’t really show much emotion unless he gets really excited about something. WHICH is rare. I hate to say it but he’s probably a little like BBC Sherlock in that respect. Ugh. Before going “rogue” he was big time psychology and does dabble still in trying to figure other races out, especially humans. He is amused and curious about their pathos and extensive emotional crazies.

Rhel is a pastel freakshow which pretty much exemplifies her rather gentle and naive nature - despite the fact she can make your insides burn out with one prick of her syringe driven omnitool in “battle mode”. She can get pretty srs bsns but usually just snaps back into her usual d’aw-dur face after a fight when everything is A-ok. She is more or less the in-house medic and knows her craft well even if she is better situated for chemistry and other things. She creates a lot of the Syndicate’s bio weaponry on that note. She does not hang with the other three as she isn’t exactly “their type”- also considering usually Ebri is around Urrl WHO happens to be a Vorcha. And Rhel is mortified by Vorcha.

Now the last two are my adaption of Lystheni » http://masseffect.wikia.com/wiki/Lystheni «- the off shoot of Salarians that reside on Omega. There is no official look to them but they are canon. Basically, I depict them as prickly, warty and for all intents and purposes “toady” skinned Salarians. Everything else about them is pretty much the same besides that…and well, their pupils are usually just slits giving them a creepier look then the usual Salarian. They are just gnarly and gruffer and literally stick out like a sore thumb against their kin. They aren’t ALL prickly but hey…whatever.

I’ve drawn Ebri before BUT at the time she was named “Arexxial”. That has been changed as the character Arexxial originally was based on was my albino Echidna Arexxis that I had back in my Sonic The Hedgehog days. Har har. Laugh it up.

Ebri herself is based on a black dragon from DnD I was going to play but never got around to playing. She is ridiculously jumpy, hissy, spastic and loud. She is usually pal’n around with Urrl (the vorcha is actually a fuck ton calmer then she is) and annoying Arrexial like some creeper sidekick who won’t shut up. Arexxial and Izra tune her out most of the time though she has almost had her neck broken by coming up on Arexxial’s blind side. She is a very capable fighter and tends to like to infiltrate and garote/shiv people. Shiny things, ESPECIALLY MONEY, make her a happy camper. But because she likes to play cards and gamble she tends to lose it a lot. Mostly to Urrl.

Arexxial is a srsbsns bitch face. When I finished with her I was pretty happy with the results. She is pretty much head of the Infiltrating “Salarian” division of the Syndicate and because of her experience is pretty damn good at doing what she does best: sneakin’ in and murderin’ folks. Like Ebri she can garote/shiv but also a bunch of other things that include torture and other devious bad things to get what she wants/information/a new notch on her tallied up armor. SHE DOES however listen very astutely to Spiira and her murderin’ is kept in check since Black Spiral really doesn’t go killin’ innocent folks, ODDLY enough. She has quite the arsenal of weaponry, blades mostly, and a couple capable guns that she prefers. Like Orvca (my Krogan) she will take a “liking” to someone if they show how capable they are and are worthy in her eye(s). She is blind in one eye but that doesn’t stop her in her old age - no one is even really sure how old she is but she’s up there by Salarian standards. She likes soft fabrics and ornate things like artifacts and the like; especially things that relate to Sur’kesh in some way. Her quarters are almost a complete opposite of how she presents herself, almost rivaling Spiira’s decadent living space…except for the fact Arexxial has been known to keep trophies of particularly nasty kills and mount them on her walls as mementos.

Long post. I must do more head shots later after I finish my other commissions.

This foursome belongs to moi. Much appreciated if not grabby hands - i'd like to think this place isn't like DA in that respect. Ugh.

And there you have it. They are all mine, KKthx. Please do not copy/alter/redistribute.