Banners featuring my OC ... by BlackDragon07 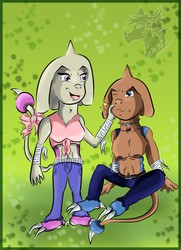 *Banner #1: Featuring my dragon OC Helly-Elias and my wolf OC Jarkko.
Contrary to his name, ( "Helly" , which may suggest "hell" ), Helly-Elias is a good dragon. He is the master of the elements fire, air, earth and water / ice, he controls with his orb. It is assumed that this dragon is from one of the 9 worlds of Yggdrasil. Besides, it's Jarkko, a Viking wolf (which has two forms, one anthro and the other classic wolf (shown here)), He is the friend of Helly-Elias.

*Banner #2: Featuring my dragon OC Fröst, my wolves OC Moonlight-Sonata and Sonia and my high-elf OC Eleonor.
Fröst is a evil ice dragon. She wants to dominate Scandinavia, but Moonlight- Sonata and Sonia wants to prevent it. Eleonor threat Fröst here with an arrow, but she will not shoot at her because Eleanor is a high elf who loves dragons (she is a dragon breeder and trainer )

(C) The characters Helly-Elias, Fröst, Jarkko, Sonia, Moonlight-Sonata and Eleonor belong to BlackDragon07.
You are not allowed to use them in any way, shape or form!