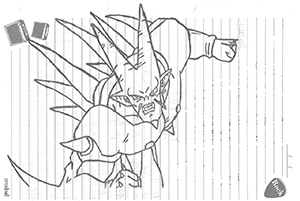 Moving from the subject of digital drawing and back to traditional style design, I want to continue and finalize my posts on things related to Dragon Ball GT.
Dragon Ball GT is definitely not one of my favorite Dragon Ball seasons, but I have to admit that I watched the anime only because of my beloved General Rildo and Syn Shenron (and their evolved form Omega Shenron) that won my heart!

This is the base form of Syn Shenron before absorbing six dragon balls and becoming Omega Shenron.

I made this drawing and the next Omega Shenron at the same time as the previous one, and you can clearly see that the paper is a bit worn and stained, but the drawing is very visible and with great quality, and precisely because of this I am posting it here.

I still want it in a while, I don't know how long... But I want to draw General Rildo.

More info about Syn Shenron/Omega Shenron below:
"Syn Shenron, known as Yi Xing Long (一イー星シン龍ロン Ī Shinron, lit. "One-Star Dragon") in the original Japanese version, is the seventh and last of the evil Shadow Dragons to appear, and the last villain to appear in Dragon Ball GT.

Appearance:
Syn Shenron appears as a large, humanoid, white, black and blue dragon. Two large, fleshy horns emerge from the top of his head, and a pair of tiny feelers emerge from his upper lip, giving the appearance of a mustache. Long black spikes protrude from his shoulders, elbows, back, and knees. Two more fleshy spikes protrude from the sides of his chest, and his abdomen and the back of his head are dark blue. The One-Star Dragon Ball is visible on his forehead, sporting the blue color and cracked appearance of all the corrupted Dragon Balls.

Personality:
Being born from one of the strongest and most selfless of wishes, Syn Shenron is the most selfish, uncaring, and evil-hearted of all the Shadow Dragons. He feels no compassion for any form of life, even destroying his fellow Shadow Dragons if it benefits his ultimate goal of universal destruction. He also enjoys belittling his enemies, reminding the heroes that they are to blame for his existence.

Unlike Nuova, Syn will not fight in a fair match; although his tactics are not quite as underhanded as Eis, he will not wait for an opponent to recover from their injuries. He can become arrogant in times of complete dominance against his opponents, sometimes letting them suffer slowly and mocking them before going for the fatal blow. However, unlike many previous villains, Syn Shenron has no desire to fight a "worthy" opponent; he berates himself for underestimating his foes and actively tries to prevent them from powering up or fusing.

If confronted by a stronger opponent, Syn can be driven to fear and worry, but he usually attempts to hide it as quickly as he can. His proud facade is finally destroyed in his last moments, reducing him to futile pleas for mercy when he realizes that he cannot stop Goku's Universal Spirit Bomb." - Source: Dragon Ball Wiki.