The Blog 2 P4 - September by azsola 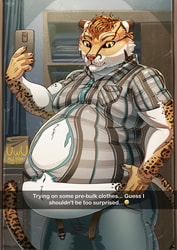 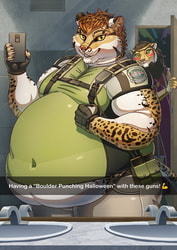 "Had a really good workout day with Maz. I decided to record our session so that I could send him the video and have him practice his form. Everything looked like it was going alright until he started getting kind of fidgety when we were doing military presses.
I couldn't figure out what it was but it seemed like he was stiffening up and wasn't able to maintain proper form. I thought it was odd at the time and decided to look back on the footage and realized that my belly had been pushing into his back the entire time we were working on them. I guess that explains a few things. I know that my extra padding hasn't exactly been much of a secret but damn I hadn't realized that I had reached the point where I couldn't stand behind Maz without pressing into him like that.
In a way though... I kind of liked how the little guy got so nervous when I did it. While I'm most definitely going to continue pushing to get those muscle gains I originally wanted... maybe there is something to having a bit of extra heft where most aren't expecting it.

Part 4 of Kent's weight gain blog is finished! ^^ This time, less focused on the shift in weight between the months and more onto the funny interaction between Maz and Kent :3 I hope you like it!

Would you like to see my art earlier, with wips, high resolution artwork and other stuff? Consider supporting me on Patreon! ^^ https://www.patreon.com/azsola