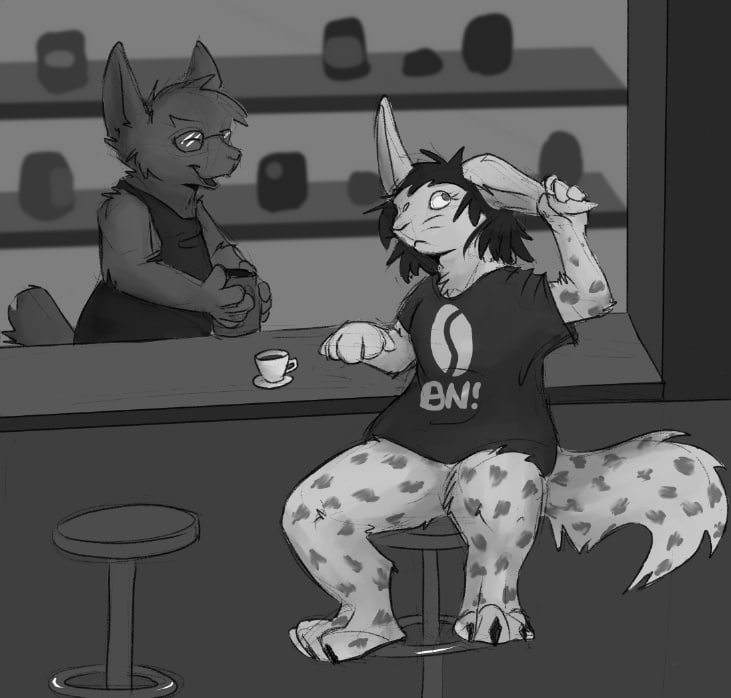 It had been a couple of weeks now, and Shy the spotted hyena was quite comfortable during her month as a girl. She was a little taller and broader this way, with short hair and cute glasses and an oversized T-shirt advertising a fictional coffee brand, "Yeen Beans", as she navigated down unfamiliar streets to check out a new coffee shop which had bubbled its way to the top of her list. No reason not to help a new small business, right? And a good cup of coffee was worth a journey.

Hopz, with a Z, was right next to a tram stop, and took up part of the ground floor of a very tall building. It looked very new, from its neon sign of a rabbit jumping over a coffee bean, to the polished walls and floor. The only things up on the wall were a "Help wanted" sign and a short menu. There was nobody else here, but that was deliberate on Shy's part; she was here just before any big rush of commuters might be arriving to get their morning fix.

The yeen stopped by the counter and waited for service, which came in the form of a small brown and cream bunny, hopping over with a winning smile.
"Hiya! What would you like?"
"Nall, is that you?" wondered Shy, bemusedly.
"Yes. Okay. I might have added this place to your phone," said the rabbit, with their checkered scarf and round glasses. This was Nall, a shapeshifter and terrible troublemaker.
"So you're not up to any mischief?"
"What a strange thing to say," grinned the bunny. "I'm always up to mischief, just not necessarily here and now. And besides, this way I can make you an apology coffee."

Nall didn't really need to apologise, as Shy had wanted to be a girl; but, it was their fault she didn't have the option to change back for a few weeks. Thirty-five days, give or take; but certainly no less than a month.
"Well, if you want to. Something fancy. Hey, if it's good I might come back here."
"I certainly hope so," smiled Nall, before turning the grinder on and getting to the all-important business of making coffee. Beans, water, hot milk, something from one of the many syrups which lined the back wall; and, coffee.

"I like the cup," said Shy, once the drink was in her hand.
"Sure, but do you like the coffee?" wondered the bunny.
"You'll have to wait until I'm done," she said, moving on over to sit on a stool not too far from the counter. "'Cause I know how good you are at waiting."
Nall, naturally, was no good at waiting.

Shy took her time, and swapped idle conversation with Nall while things were still quiet. A couple of people popped in, but the hyena was busy with her phone, trying to plan the rest of her day off. As she sipped her drink, she felt good and energetic, her foot bouncing against the chair. The gentle haze of morning was lifting, replaced by the soft fuzz of big, floppy ears drooping in front of her eyes.

A tug revealed the rabbit ears were really hers. Tickles around her cheek led to finding whiskers; her feet plumped up into bigger hindpaws, and her tail curled up on itself and began to shrink away.
"Nall!" she said loudly, failing to hide the blush and the embarrassment in her voice.
"Sorry, be right with you," they teased, finishing service to another customer while the hyena continued to change. Heart racing, feet bobbing, ears twitching; she was getting a very heady rush of energy, from the coffee mixed with whatever else Nall had added. In fact, the need to move around had her standing up, as she lost some height, making the big T-shirt sit even larger on her. Blue fur with brown spots, a little tail lost under clothing, raised up on the tips of long rabbit feet. Long ears that preferred to hang down, and wiry brown hair that hadn't changed much from her being a hyena not a few minutes before. Nobody had noticed, except for Nall, and nobody would think to doubt that she was a bunny, perhaps aside from the choice of clothing.

"So, when you said apology coffee…" began Shy, with a blush lighting up her cheeks.
"I mean, it is. Kinda. Sorta. But it's also, you know. I haven't found anyone to help me staff this place, so if you wouldn't mind filling in then I'd be super grateful."
"And you ask me that by turning me into a bunny?"
"No, I did that because I knew you'd thoroughly enjoy the experience. Now I'm asking you if you fancied being a coffee shop bunny for a while."
Nall's teasing wasn't helping the blush covering her face, but they weren't wrong. Shy had enjoyed that very much.
"Mmf. Huff. I had plans. Okay, I didn't really. I'll do it, though, because it's you. But you'll have to do something else nice for me."
"I think we'll work something out," grinned the brown bunny.

The sound of a tram pulling away had Shy's ears twitching, and the blue bunny looked to the entrance, to see plenty of passengers heading her way.
"That's good timing, as well. Hop on back here and we'll get you started," said Nall… 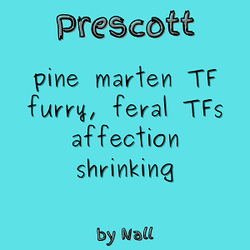 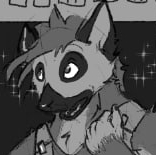 Here's one of two collaborations I did recently with Lemurr, where I wrote a story and Leem drew art. ^^

Shy is trying out a new coffee shop, and Nall is there! Something something transformation~