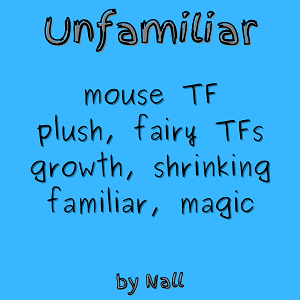 Gill was a good and friendly mouse, most of the time.

It was their day off, and so the fluffy blue rodent was spending it in the Great Forest, their original home from before they became a familiar. Sure, their witch Chloe was nice -- purple-scaled, big round glasses, new to the ways of magic -- but it was nice to get away from it all every few weeks. Hanging out with the grass underneath their paws, snagging food from the bushes; popping into the big rodent town of Peardrop, or one of the smaller villages tucked away beneath the trees. It was exciting to see how things were changing over the months and years.

That had been the idea, except for Kickaha.

Not that the coyote fox was bad company; that was too strong a complaint. Something had him in a playful mood today, and while Gill had been trying to ride it out, the stars were slowly vanishing into the sunlit blue of morning. It'd be time to go back soon.

The first incident could have been an accident, true. A little potion spilled over Gill's scarf, which had promptly grown to swallow them up and squeeze ever so tight until the next thing the mouse knew, they had become a felt plushie. Kickaha grinned and rubbed sheepishly behind his ears, and shrugged it off. "It's a good look," he'd argued. "Could be a whole line of collectable mice. Just sit tight, it should fix itself soon."

After that, some sort of growth spell? It wasn't clear why he'd been toying with one in the first place, but it got into Gill's tail and soon they were towering above the trees, to their dismay. Various apologies to critters below and around them, careful shuffling, a helpful levitation spell; and the smiling foxyote perched on his shoulder. "I can see my house from here!"

Finally, after much of the evening had been taken up repairing that mess, Kickaha decided that what their campfire really needed was a good puff of fairy dust. For colour, and scent, and sparkles, and all that jazz. And also for turning Gill into the tiniest fairy mouse, with sparkly wings and a difficulty being heard unless they practically nested in the yote's ear. Fairy magic was pretty unpredictable, but whose idea had it been in the first place?
"I just can't help it sometimes," he'd said, sheepishly. "Coyote thoughts. But it has been a good day, hasn't it? That's fair-y to say."

Sigh. No, it wasn't all bad. Catching up was good, and spending hours being constructive with the mice and rats of Peardrop had been refreshing. Kickaha had helped in that too, mostly. In truth, Gill had been looking out for the opportunity to respond; picking the right moment to pull a prank of their own. Being a magical creature came with its own playful moods, and they knew Kickaha would be fine with that. Eventually. Turnabout was fair play. They'd laugh together, after today it'd be well-earned.

"That was a quick day. Ugh, I don't know if I feel rested at all," lamented the mouse, from their broad perch up the bough of a large tree.
"You make life sound like work," pointed out the yote.
"Ehh, yeah, that's harsh. It's satisfying and Chloe's lovely. But it's just the urge to sprawl. Have a lie-in. Five more minutes. Magic's great, but six in the morning? The only spell worth doing before eight is Summon Coffee."
"Well, that's the familiar life. I like to go where I want. But hey, we could catch up next time as well? Hopefully with fewer, um, perfectly innocent mishaps."
"Yeah, yeah…"

Kickaha sounded like the day was nearly over, and in part that was because the air around the tree had started to shimmer. Blue twinkles, puffs of light smoke, a little swirl of light; Chloe was calling up her familiar, and Gill's ears perked in reply.
"Ah. I'm coming, pet. Just a moment." Five more minutes, they mouthed to the yote, who grinned and stood up, waving a paw. Time to leave, then?

Oh, stars. Chaos and sparkles and shiny things. Right there, Gill saw the prank of the moment; oh, Kickaha would be so mad. The foxyote was stood up and waiting for Gill to answer the summon and poof out of existence, but instead the mouse gave him a pet between the ears and a few cryptic words. "Don't do anything I wouldn't do." Then, it took just a little nudge and a mouse tail against one of Kickaha's feet and into the swirl he went, disappearing in a blink.

It all happened so fast, the yote took a few moments to realise what had happened and where he was. Being drawn out of the Great Forest and pulled to wherever the mouse familiar came from, tumbling through sparks and stars as he shrank; big foxy paws becoming small and slinky. That big brushy tail rolled up, turning long and slender, as blue fur started to roll over Kickaha's rust and white. Crumbs, was he really turning into a mouse?
"Wh-- Gill!"
Not that his friend could hear him now. Instead, the yote-mouse was hearing more of another voice, who he supposed must be Chloe the witch.
"Hey Gill, rise and shine, I really want to get this magic missile spell down this week."
Uhhh. Being a familiar? With his magic? Kickaha hoped his mouse friend knew what they were doing. Yet, wasn't it such a grand prank? As his nose turned short and whiskered, fur puffing out and ears dropping to be round and silvery: one coyote fox, all wrapped up in a blue mousey package. No way Gill had planned this, it was pure inspiration. Delightful.

Kickaha's borrowed mouse form appeared for Chloe in a flash, as to him the world suddenly returned to focus and he landed on his rear with a surprised squeak. Blue fluff, silver tail and ears, but still with the yote's golden eyes and green cloak.
"Oh. Hello! That's a new outfit, pet. I like it, it's all foresty."
The purple salamander girl was cute as a button in her witch's robes, though without the stereotypical pointed hat. Big round glasses framed her face, and she had an eagerness that didn't fit the fact the sun here wasn't even wholly in the sky. Kickaha didn't think he'd easily convince her that he wasn't actually her familiar, so the mouse took a deep breath and prepared to be Gill. For a while at least. This ruse definitely wasn't going to last a few weeks. Was it?
"Ah, yeah. Yeah! It's sweet. I got it from my good friend, er, Kickaha, he's really lovely."
"Mm! Yeah I remember him, I thought you said he could be pretty mean to mice?"
Ouch.
"Ahaha, well, maybe! But you know, he's not that bad really."

Kickaha looked around the little wood building where Chloe practiced her spells. At least as a familiar, he didn't necessarily need to know how things worked. Mostly, it hit him how everything here was so big to a mouse; he could have happily curled up in both her lizardy hands. Gill wasn't quite that small at home.

"So, um, everything alright? You seem a bit lost."
"Ah, I guess? It's so early. Yaaawn. I had a long busy day," he improvised. "I'm sure things will come back to me. Why don't you tell me about your spell again? Just to see if you've got it all down and everything."
"Aha, a test," she grinned. "Well. Let's start from the beginning! Come on up and I'll show you."

She offered a hand, holding her arm quite stiff, and Kickaha saw what he needed to do; dropping to fours, and scurrying up to perch on her shoulder. This couldn't be so hard, could it?... 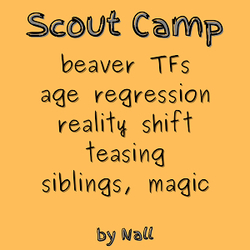 For Kickaha! A cute little story about a familiar's day off, a good few coyote-fox pranks, and some fun familiar-summoning mischief... <3 Mouse TF with a few shorter TF moments~