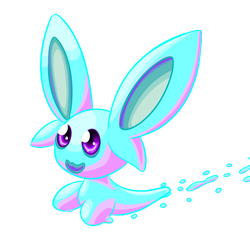 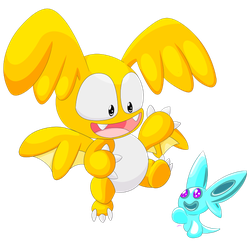 Hiya all, This is something ive been working on... Updating the Amellobe reference sheet

These are a draw to adopt species, so the idea is just use the ref sheet and create your own amellobe from it!

Amellobes are creatures that consist entirely of slime! They dont have any internal organs and their slime absorbs the smell and taste of their surroundings! So if an amellobe lived in a sweet shop, their slime would smell like freshly boiled sweets, and taste like sugar. For this reason it is advised to keep them away from unpleasant places (such as sewers or farmyards)

Amellobes are much tougher than they first appear, if they get squished, splattered or flattened, they will reform back to their original shape and go along their way as if nothing happened.

Amellobes tend to leave slime trails everywhere, which despite being a fantastic fertiliser, can wreck havoc with carpets and long fur often gumming it together and making it difficult to remove.

Their slime is edible, it has the consistency of sticky, very runny Jam and offers a lot of health benefits. If a chunk of slime where to be taken from the host the missing slime would be reformed within a matter of seconds, their slime regenerates very quickly and does not break down in water or other fluids. In fact if an amellobe where to be dropped into a lake the slime would absorb the water and effectively "reset" the amellobes smell and taste, It would also turn them transparent making them appear like a crystal clear glob of slime.

Once they "dry" out, their colour returns back to what it was before, however their smell and taste changes in accordance to the enviroment that they are in at the time. They weigh in at 450 grams (thats 17.6 ounces) and stand at about 22cm (8.6 inches) tall. Amellobes do not have teeth (even with the "monster" mouth style), that mouth of theirs is purely used for communication. If you where to be "bitten" by an amellobe, it would just get more slime on you, they cant do other mammal any harm.

Amellobe's dont eat very often, but they consume berries and other soft food by sticking to it and sucking it into them, where its slowly broken down over a period of months. They cannot move very fast though, the fastest amellobe recorded was 6mph. They will hapilly move with their owners but if you plan to run, they will probably need picking up!

Amellobes can morph their shape to look like anything, however it can take considerable training to be able to get them to achive this as they dont have a brain they are not the most intellegent creatures around, they are sentient but not intellegent.