High Orbit Saves The Pandas is now PG-13 by avianinvasion 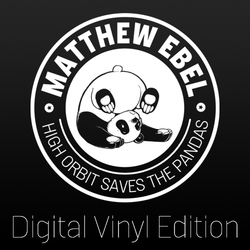 However, not everyone feels that way. So as promised on the back of the CD, you can now get censored versions of the saucier tracks from High Orbit Saves The Pandas in case you want to play the album in mixed company. The tracks are available exclusively at www.matthewebel.com/savethepandas as a pay-what-you-want download.

Why PG-13? Well as much as I'd like to make the album appropriate for all ages (like my seven-year-old nephew)… it ain't. With key moments revolving around alcoholism, hotel-room debauchery, and my robots calling me a lesbian, trying to make the album "family friendly" wouldn't make sense. Most of the jokes would fly right over young children's heads anyway, so fundamentally changing the script just isn't worth the trouble.

After all, I didn't write this album for kids. I wrote it for those of us who remember Star Trek IV fondly enough to spend our weekends at Sci-Fi cons decades later.

There were really only three tracks in need of de-obscenitizing:

So go take a listen at www.matthewebel.com/savethepandas!