Walking through the catacombs, Richard swept his eyes back and forth uneasily. This really wasn't his style, but he'd heard he might be able to find out more information about himself here. His torch cast an eerie light around the pillars. The dust was heavy, and it felt like nothing had been here in decades...which was probably true. Something caught his eye from the corner as he rounded a bend.

Strange...nothing could possibly be alive down here. Bending down to examine it closer, he saw a thick, viscous film on the wall, damp with moisture. Water from above? Condensation? Oil? Whatever it was, it wasn't here anymore, he realized. Taking a step away, he stepped into something wet and sticky.

Looking down, Richard saw a thick, viscious goo enveloping his shoe and his leg. A dark blue, it clung to his jeans and started creeping up. It wouldn't come off as he shook his leg, so he waved his torch at it. It recoiled from the flames, and he waved the fire closer, trying to drive it away while backpedalling. He couldn't shake it off, but with sufficient prodding from his improvised weapon, the goo shuddered off his leg and fled away into the darkness.

"Ick." he muttered, looking down. Part of his pant leg had been eaten away, exposing skin underneath. His shoe wasn't in much better shape but could still function for the moment. His leg was slick with residue from the slime, and covered in sweat. He spit at the trail of the slime and set it on fire with his torch to teach it a lesson as he walked away, further into the catacombs.

However, he didn't get very far before he started sweating profusely, and felt sick. Leaning against the wall, he felt like retching, and cold sweat covered his body. He rubbed at his forehead and felt it burning hot, feverish, as he stood there. Had he been poisoned? No sickness manifested that fast...he dropped the torch to the floor as he vomitted, trying to keep himself upright. He coughed afterwards, thick and phlegmy, ejecting a glob of deep purple liquid. He looked down, swaying unsteadily as he tried to keep things straight in a world swimming. The sweat started dripping off his body, wicked away by his shirt as it took on a purplish color. He started to hear a hissing sound, as his shoe sole started to be eaten through...from the inside.

Looking down, a similar viscous sludge, a deep purple in color, started sliding out of the holes in his shoes. He lifted his foot, gasping, and the sludge started dripping out to the floor. Pooling into a single mass, it started flowing further, his shoe falling off his raised foot and into the mass, quickly eaten away into nothingness. Looking down, Richard screamed as his whole foot was a amorphous purple goo, now, bulging in his sock and finally tearing through. His other shoe broke open and he lowered his leg instinctively, right into the slime. Stupid move, but now he couldn't get his leg out of it.

Pulling against the sludge, he felt an odd, watery sensation in his legs as he started to sink into it, slipping lower into the growing pool. His feet were gone now, and he was up to his knees in the slime, fighting to keep above it. Trying to get out didn't work, and just seemed to make the gelatinous mass jiggle. As he fought, his jeans melted away, slipping into a blueish liquid and then disappearing in the slime. He kept struggling, bracing his upper body against the wall, reaching for a handhold to pull himself up and out, but by now he was below all of them.

The watery feeling continued as more of his bones liquified, making it harder for him to support himself. Screaming, he grasped at the wall with his arms, trying to hold himself up, but one arm collapsed as the bones disappeared, falling limp against his body. His hair started flowing down in rivulets of goo, clouding his vision as he continued to collapse. As he got shorter, the burbling slime beneath him grew larger, and it became harder to think. His shirt was gone now, dissolved, as his vision turned a shade of purple. His other arm collapsed, absorbed into the mass of his body that was almost entirely goo now. His heartbeat started going erratic, as he felt sick, vomitting out one last pile of purple sludge as it slowed, and then stopped, dissolved into the slime. His vision faded completely as his eyes dissolved, and he shuddered away from the heat of the torch. Heat was good, yes, it meant food, but that was too hot. Thinking became harder, the idea of his name repeating in his head as he tried to hold onto his identity. But the very words themselves became harder to recite, fading into echoes and then vanishing entirely.

And soon there was just another slime to wander the ruins as a guardian. 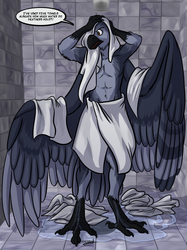 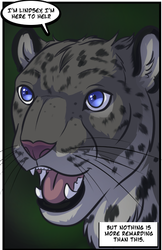 Richard explores a temple searching for more clues to his Wildtouched nature...but finds something else, instead.

Written by ME.
Thumbnail by Jakkal