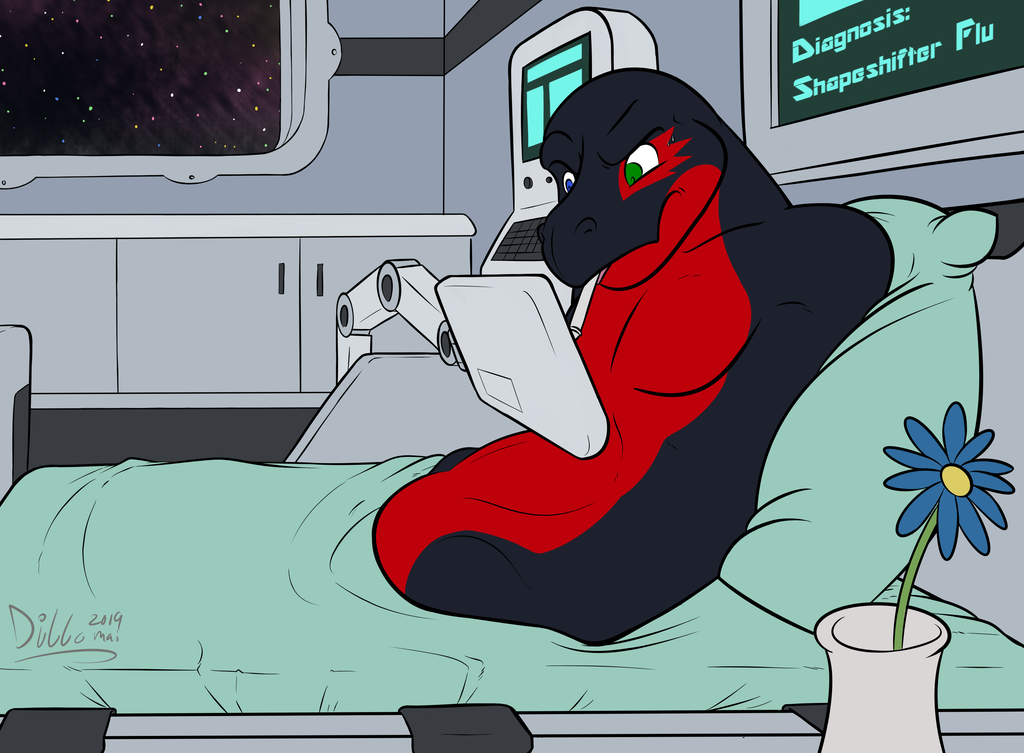 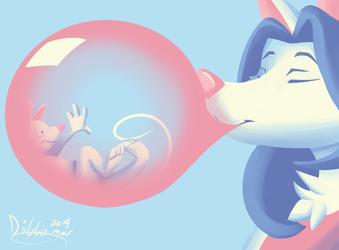 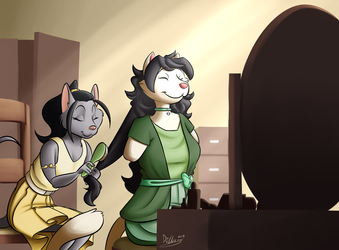 Flat colour commission for nightdragon0 , of his character Arysdron after a... somewhat unusual chain of events.

nightdragon0 wrote up a short story to go along with it, which explains a bit more about the situation:

Typing with the pointer grasped precariously in his jaws was a huge strain on his neck and something he hadn't quite mastered. The false tongue replacement for his currently missing one was supposed to help, but it was a fixed shape and not maneuverable at all.
With some misadventures, Arysdron had managed to get out of his previous tree shapeshifting mishap and into contact with the guild. However, he was literally not back to being himself. The shapeshifters flu he was suffering from had left him in this partially reverted state.
He was still stuck being just a head & torso, completely without any limbs, tail, wings, horns or teeth! And without his tongue or vocal cords fully reforming yet, he couldn't speak anything coherent either.
Being able to use audio commands would've been much easier, but the computer just couldn't understand his gargling. Neither could the medical bay staff, whom he'd had quite the experience trying to mime to with just a head or slowly type to.
Giving him temporary prosthetics had been determined to be unwise as they might affect his body reforming and the tongue insert had been designed to easily pop out when his own reformed.
While he wasn't rooted to the spot anymore, he could barely do anything and getting an itch was a killer. He was at least able to slowly nudge himself into a somewhat seated position and push out the swivel arm mounted touch panel with his snoot. Using it to browse the web was a pain though. Plus that he was bored to death!
Oh no! The pointer is slipping! Arysdron twisted his jaws, trying to regain his grasp. If this drops again, I’m never getting it back!
The point fell, bounced off the bed and clattered to the floor beneath.
“Gawwrraaa!” He cried in frustration.
Perhaps he could use the touch pad with his snoot. Of course, he leaned forward too hard and shoved the touch pad & swivel arm out of reach.
Argh! Okay…if he could somewhat stand up, he could maybe get it back. Crunching his belly, Arysdron managed to push his body forward. He got to that standing position on his hip area for a second, then promptly fell forward onto his belly and bounced to the side.
“Gwwarrghh!” Without limbs to grasp anything, he rolled off the bed and splattered onto the floor, knocking over everything on the nightstand in the process. That also knocked the tongue insert out, sending it bouncing across the floor and left him stuck lying flat on his back.
“Guugghhuu!” He could only wait for the medical bay staff to come by and help him back up. They were going to get a good laugh out of the comical scene born out of his stubbornness.
I just hope my body kicks me out of this shapeshifter flu before I forget how to use fingers. Arysdron sighed.