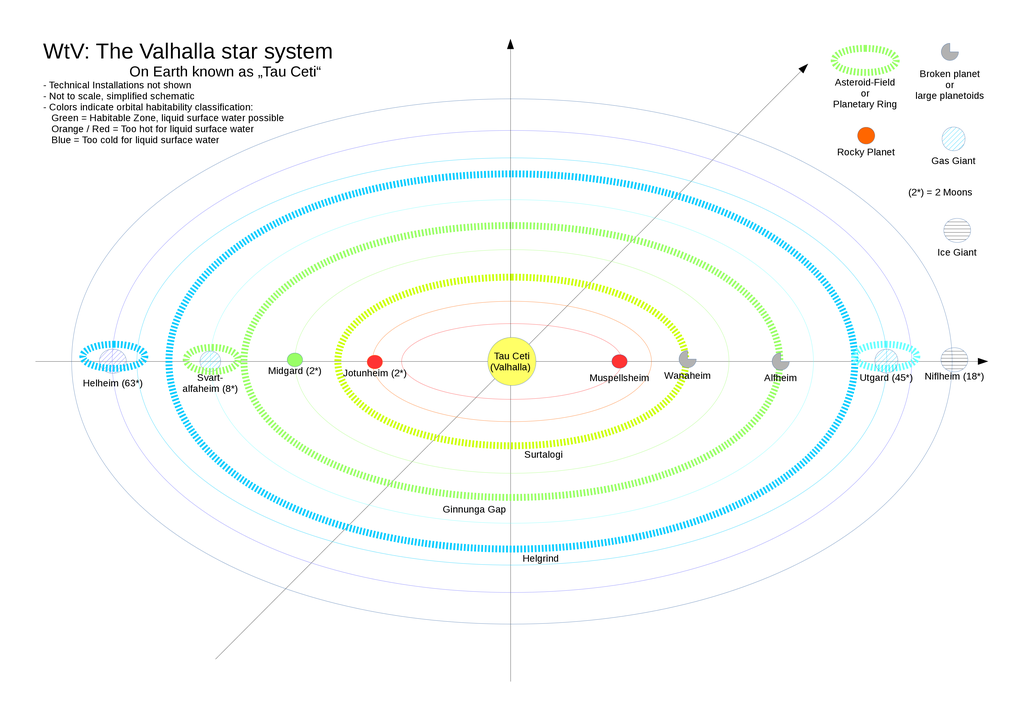 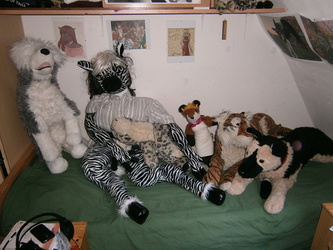 Jotunheim ; Venus type planet, however with a thinner, clearer athmosphere and a bit closer to the sun. Two moons. Abbreviated "Jot"

Wanaheim ; a fragmented planet on an orbit equivalent to a position between Earth and Venus. When the planet passes, earthquakes happen statistically noticeably more often.
Wanaheim sits in an asteroidbelt formed from its own fragments and collected debris. It would be a habitable, albeit warm, planet, if it wouldn't be a mere collection of
fragments. Wanaheim is equipped with extensive industrial and dockyard facilities and habitats, to serve as a main hub for activities in the inner belt.

Surtalogi ; The Inner Belt ; Surt's sword. after the sword of the fire-giant Surt, ruler of Muspellsheim, who fights with it to destroy the Asen living in Asgard.
Each time Wanaheim passes Midgard, asteroids are pulled out of orbit and crash down on Midgard, Asgard and Wanaheim's remainders.
Surtalogi contains many of the defense installations of the habitats. Abbreviated "Surt".

Midgard ; Earth type planet. Earth type rotation, earth type orbital traversal, primary moon Asgard 98% earth-moon like, secondary moon Noatun is a
mere caught asteroid, on a slower, further out orbit, but with a high spin-rate. Midgard is in the end-throes of an ice age.

Ginnunga Gap ; The Middle Belt ; after the nordic mythological place of creation, where the fires of Muspellsheim and the ice of Niflheim created the first life, a
dense and rich asteroidbelt, containing numerous waystations, asteroid-based habitats and defense installations. Mars-Orbit. Abbreviated as "the Gap".

Alfheim ; a shattered world, part of the Ginnunga Gap. Would have been a Mars-like world, but larger and thus with a denser athmosphere. Each time it passes Midgard,
Midgard experiences a rise in volcanic activity and meteoritic activity.
Alfheim contains several dockyards and habitats, designed to serve as one of several spokes for traffic with the outer system as well as the main hub for
activities in the middle belt

Svartalfaheim ; a Saturn-type gas giant with a rich ringssystem. It refreshes its rings regularly each time Svartalfaheim passes Alfheim in orbit,
drawing debris from the middle asteroidbelt. Various smaller habitats and space stations in orbit and in some of its larger moons. Position roundabout where,
in the sol-system, the asteroid belt is located. Stations supply hydrogen to the inner system to cover spikes in consumption. Abbreviated "Svarta".

Helgrind, according to nordic mythology the fence separating the realm of Hel , where she watches over those that died not in combat, from the other worlds.
Also known as the outer belt.
A vast asteroid belt in the equivalent orbit of Jupiter. Thousands of outposts, industrial stations, waystations and smaller asteroid-based habitats.

Utgard ; trans-Jupiter-class gas giant. Some of it's moons exceed Muspellsheim in size. It is orbited by the refinery and factory station Thor, which controls the harvesting of

Helheim ; Jupiter-class gas giant. The Realm of Hel in nordic mythology. More moons than Utgard, but smaller ones. Helheim's moons contain many installations focused on research.
There would be some more moons, but drifting debris and wrecked, gutted stations indicate that there are good reasons to do some of the tests far away from the inner
system. Asteroids drifting out of the system often get caught by Helheim, and refresh the rings. Uranus equivalent Orbit

Niflheim ; Neptune class ice-giant. Along it's orbit, a multitude of space-observatories reside, it's moons are brimming with port facilities and habitats.
Large dockyards orbit Niflheim, and vast storage facilities and armories are dug into the ice of the planet.
Craters and blackened areas tell of past conflicts, tangled wreckage in some of the craters pointing to gutted habitats.
Large fueltankers regularly drop by from Thor station, heading along the panets orbital path to refuel the observatories and perimeter stations.
Some, however, head out to deep space, to return decades later again, refueling at the perimeter stations to boost back into the system.
Neptune equivalent orbit.