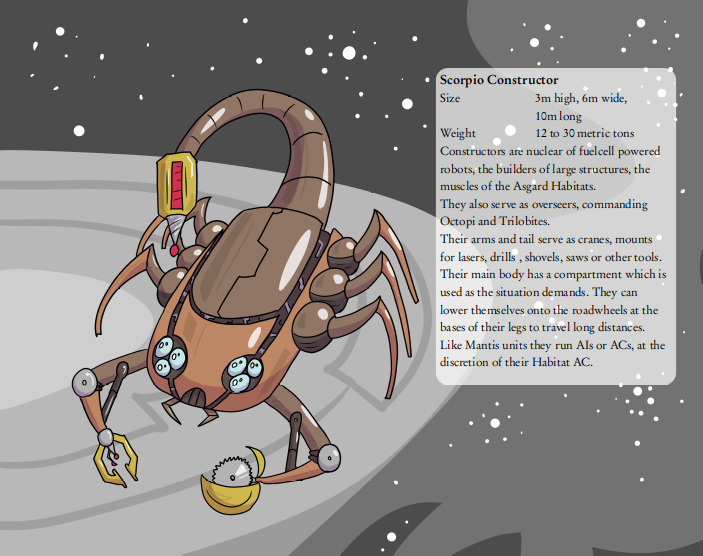 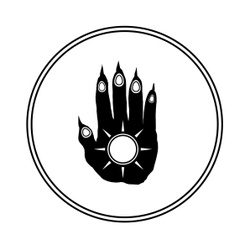 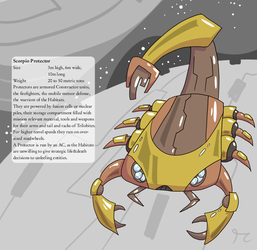 Mobility System:
On smooth surfaces, the Scorpio lowers itself down onto the roadwheels that form its hip joints, allowing for high speeds.
On rough terrain the legs are used to walk.
Each leg-tip can unfold four claws to hold or manipulate objects - intened to hold on to surfaces in zero gravity or work overhead in low gravity environments.
Additionally the claws can be magnetized to allow the Scorpio to move over metallic surfaces without slipping.
If needed, the utility arms assist in moving around.

Work System:
There are two utility arms and the tail that can equip a wide range of tools. These tools are stored in the cargo compartment, which opens for this.
The cargo compartment, 4m x 2m x 2m, rests on the legs mounting point platform.
To help with changing tools, each Scorpio carries two Trilobites under its forward carapace plus a compliment of Octopus assemblers.

Control System:
Scorpio Constructors are either high level AIs or low level ACs. In the latter case, the Scorpio itself is usually operated by an AI subsystem, whilst the AC busies itself with the management and coordination of the entire worksite, trying to create harmony in motion, action and result. The voice and speech mannerisms most ACs give a Scorpio Constructor tends to be metallic, lightly echoing, its speaking style short and curt. Humans describe them often as "busy robotic clerk".

Notes:
Free floating space stations, such as Odin, Freya, Thor, Tiwaz and others, usually have half-sized Scorpio Constructors that, with their Trilobite attendants, constantly roam the outer and inner hulls, affecting repairs whereever and whenever needed.