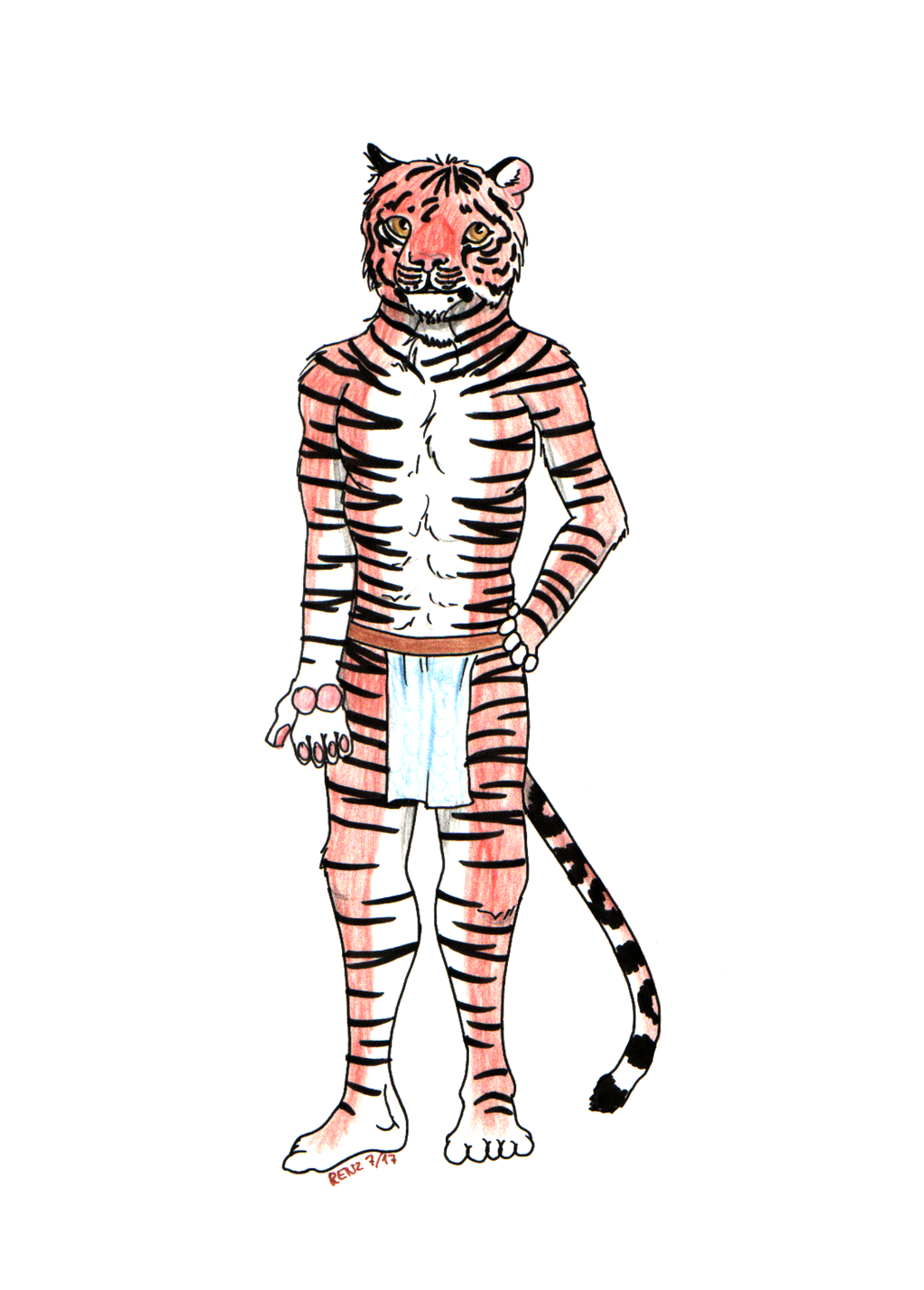 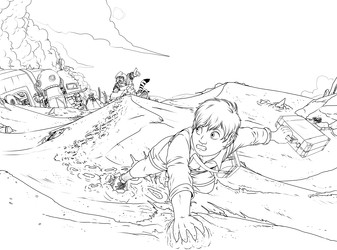 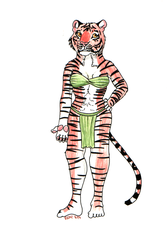 Orange Tigers
Made for me by http://www.furaffinity.net/user/anbessa

Once a high-tech society, almost fully eradicated by the Church / white tigers; native to the planet Midgard. Two subgroups exists: The Tribes and the Desert Raiders. In the tribes, they are always at risk of being killed by the stronger and bigger lionesque mutants, as these only honor brute strength.

Additionally, there are orange tigers in the Allied Sultanates, on which the following text will focus.

Their native language is more or less the same as the amazones one, so they easily learn it, and most tigers enjoy learning to write their own language. However, many find the human concept of writing intriguing, and learn it, too.

The orange tigers lost the ability to write, but have a rich oral tradition. Although every tribes village developed it's own dialect, the overall language deviated astonishingly little from the ancient orange tigers main language. The deviation is like between english in the 16th century and modern english, so many words would still be understandable, but the grammar and style so out of sync one would often have to guess what's meant. 20000 years left their marks.

Those orange tigers living in the Allied Sultanates tend to use familynames, which the male and the female select together and announce in the cities scribes office upon their wedding.

Healer: Long silken wrapskirt in bright natural colors ( leafgreen or blossom-colors ), often a likewise silken , but with reptile leather reinforced, cloak. Sometimes, in earthen colored clothes then, a full reptile leather cloak. Healers wear nothing on their upper body, so are breast-free ( healers typically comfort patients by holding their heads to their chests so that they can hear the healers heartbeat, and feel motherly protected ). Healers carry broad belts with multitudes of small pouches on them , each dedicated to its special herb or tea or tool. Healers posess a short knife to work on wounds, and to cut herbs and spices. Most healers posess small backpacks, with metal cans carrying fresh water strapped to the sides, and inside the backpack a multitude of small tools and more medicines. They are gentle souls, more afraid to harm a patient with their claws than from any sickness or disfigurement a patient may be suffering from. They are very cleanly.

Danceress / Singer /Musician / Story tellers: Clothes from 1001 nights, flowing translucent silks, they entice males and females of all species to dream. They often wear lots of jewellry, in part gifts from admirers, and so worn to honor those as well as to express their high position of influence in society. Such jewellry is often interconnected with golden or silver chains, from which bells or small metal discs, or the silks are dangling, to support them in their dancing. Singing is often done combined with either dancing or playing an instrument, where string instruments are favoured, followed by timbrels and the like. Special celebrations, like the New Year festival, which takes place when the longest night of the year happens, or the human-introduced festivals of “Nikolaus” resp. “Christmas” and “Eastern” ( not exactly that popular as there are not that many birds around, and reptile eggs… ) often call for the performances of the best danceresses, which are found amongst the Fenwa's and the tigresses alike, such as jumping through burning rings or over pyres, which is done , however, only sopping wet. Those performances are taking place only point midnight, and clothes are not worn there any more, as msot danceresses lay away their silks durign their dances, as gifts and signs of appreciation to those watchers they deem worthy of the gift. Storytelling, also sung, and with playing a instrument such as a harp ( celtic harp / Minoian harp ) is usually done wearing a flowing capuchin or cowled cape, typically of semitranslucent white or scintillating pearl or crystal-brilliant colors such as green, yellow, blue, azure or violet.

Fisherfolk: A fishers clothing is usually just a loincloth and an added light top for the females. Where there are suitable hazards to warrant such equipment, simple but robust boots are added. Most tigers in the Sultantes work at least part time as fisherfolk, as knowing the skills is considered mandatory by them. Cultivating saltwater fish and crustaceans in tanks for added variety, a lot of tigers also have basic knowledge in chemistry, biology and mechanical construction. As a sideeffect of this "farming" and their daily business, they do have a potent tradegood with the amazones: waterplants.