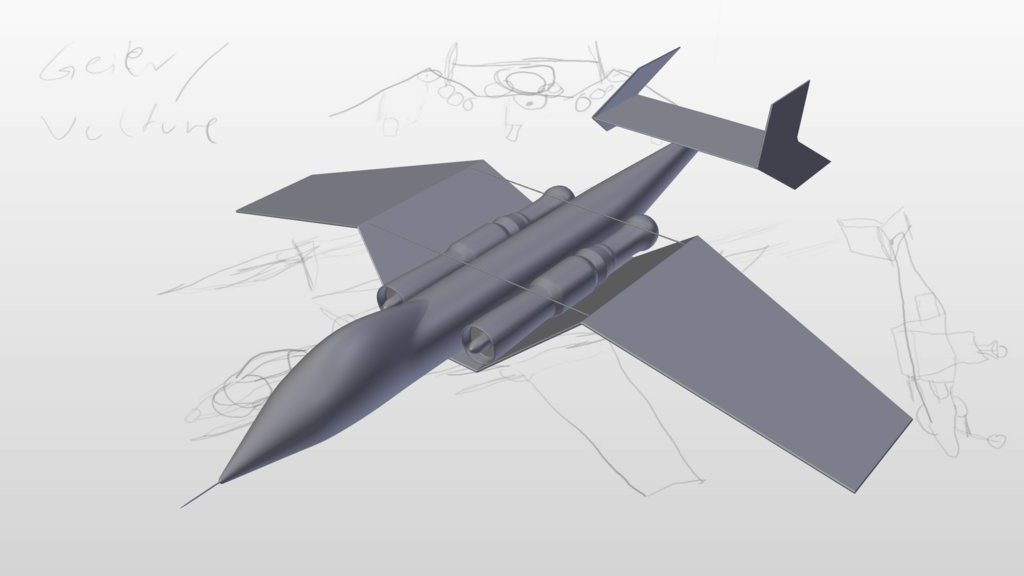 Made completely from laminated wood except for the jet engines and the armored cockpit, the Geier is one of the machines which the Reich produces in larger numbers.
It's two men crew consists out of the pilot and the gunner. The pilot controls the aircraft and the wing mounted MK108 30mm cannons from the rear, elevated seat, whilst the gunner controls the wing mounted bombs or rockets as well as the turreted MK112 50mm cannon directly under the cockpit from the fore, lower seat. The lower nose being glassed in, the gunner has a good view ahead, down and to the sides, whilst the pilot enjoys an average all-around-view along the horizon and upward.

The Geier is a slow flying aircraft for a jet fighter, reaching about 700 km/h at maximum thrust, which burns out the engines faster than the fuel. It's travelling speed is a mere 350 km/h, at which the engines remain anything but care-free, but the fuel economy get very impressive.

That is achieved by a curious wing mechanism:
Whilst bent, the wings provide exceptional maneuverability, however at slow speed they can unfold to their full length, giving the Geier the appearance and behaviour of a glider.
For travelling long distances the Pilots are advised to fly to larger altitudes, unfold the wings there, and then fly with only a single engine in low thrust mode, gliding mostly inaudible that way.

Geier are aptly named not only for their appearance and modes of flight - their name is also very aptly describing what the Reich does build them for:
Scout parties who's radio reports leave the impression of lacking in enthusiasm for the Reich quite commonly see a diving Geier as the last thing in their life before it's cluster and napalm bombs make sure that there are no malcontents amongst the Reichs scouts. Or witnesses of unexplainable artifacts.

As a side effect, Geier crew's live in their own small secluded villages around their airfields and are pampered as long as they show the needed enthusiasm. The fact that their families live directly beside the local political officers home makes sure that enthusiasm remains at a constant high.

shaped gunmount where the gunner of the aircraft sits.