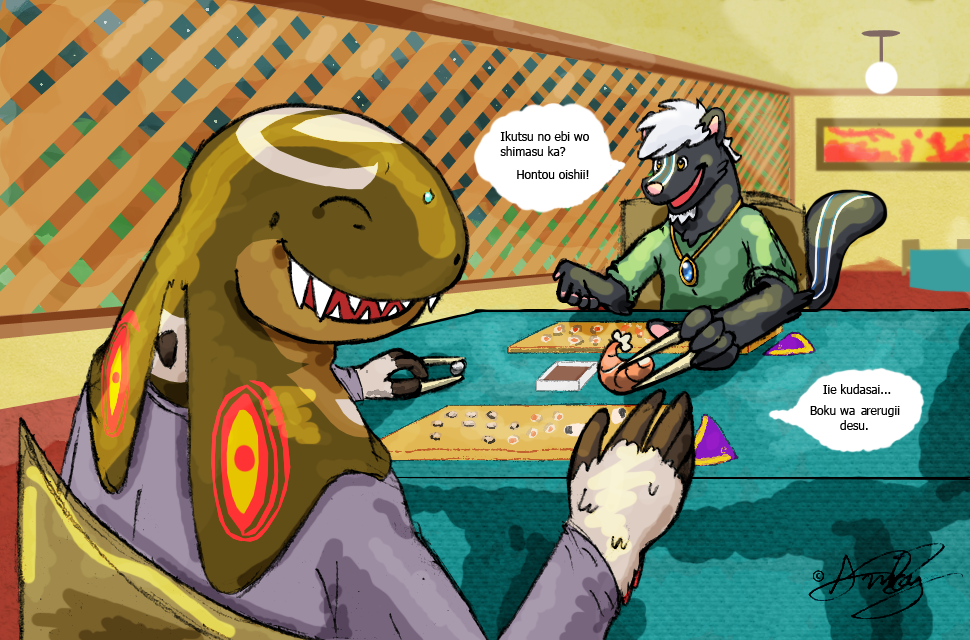 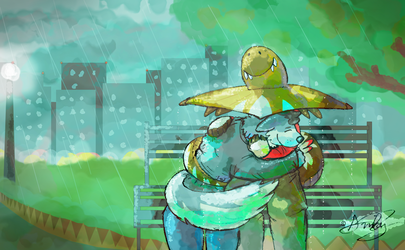 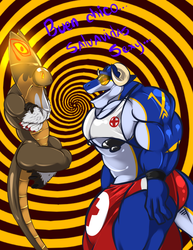 The skunk was having a pretty normal day today. He booted up the pc and began to browse the internet to pass the time, trying to ignore the fact that he was slowly feeling hungrier by the hour.

Suddenly, he received a rather upbeat IM congratulations message from a friend of his, a dinosaur hybrid, who was looking forward for the occasion all along.

"I'll treat you to some sushi!" was written on the last line of the message, which made the skunk smile and respond immediately, and thus they were to go out for a nice dinner that night.

Fortunately for both of them, the sushi was particularly delicious that night. And since both of them were so into the ambience of the restaurant and the scrumptious dishes, the skunk laughed heartily and said "(Hey, why don't you try some shrimp? It's delicious)!" in the native language of the region their meal was from.

The scalie only caught it and laughed as he answered back, "(Oh, no, thank you. I'm allergic)", which in turn only meant more food for his friend, who dipped the shrimp on the soy sauce and ate it happily.

They had a grand time at the dinner, and at the end, the dinosaur agreed to pay for 99% of the bill, leaving the rest to his friend, who giggled at the subtly-implied inside joke.

A surprise b-day gift picture for

bluedude because he's been a pretty cool guy with me and is nice to have a chat with.

Initially I wanted to draw a hypnosis-related picture for him but I figured he would receive already so many of those for the occasion, so I wanted to give him something different and more leisurely like a fine dinner out, and since he likes sushi so much, I was like, 'why not!'.

(and yes, I'm allergic to crustaceans and mollusks irl)