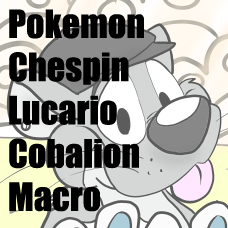 Team Rocket was used to little brats trying to stop their devious plans, but this was probably the first time they’d encountered one so… diminutive. That alone would’ve made it pretty strange but this trainer also seemed to be a Pokémon? The little Chespin held a Pokeball in one of his vines, wrapped around the orb. It looked a bit like he was wearing a hoodie of some sort, and he had this terribly serious gaze on his face. For such a cute Pokémon it was a little hard to reconcile.

Once the two criminals stopped laughing long enough for Chesquinn to get a word in edgewise, he huffed indignantly. “I’m serious! You two had better stop smuggling Pokémon.”

“Or what pipsqueak?” the female smuggler asked. “Are you really a trainer? You don’t seem all that tough.”

“Why don’t you battle me? You’ll see. But you might regret it,” Chesquinn replied. The two Rockets looked at each other and shrugged. If he was so anxious to fight then why not just grant his wish? They each tossed out their Pokemon, a Houndoom and a Weezing. Chesquinn looked at them, sizing them up. They did seem pretty well trained, better than most of the standard Team Rocket fare. Not that it would really matter in the end.

Rather than throwing his Pokeball the little Chespin put one of his vines up to his mouth like a finger and whistled. Trees in the nearby forest rustled and branches parted revealing a Cobalion. Standing on two legs and towering over either of the Team Rocket members, he looked down with a smile. He unsheathed his sword, a bright blue, glowing cutlass, and pointed it at the pair of criminals.

“Surrender, or prepare to fight! I mean, to face justice! Prepare to fight is your line isn’t it,” he boomed. The Rockets looked between each other, suddenly not so sure of themselves. No one mentioned anything about a 12-foot-tall anthro Pokémon! They muttered between each other, trying to decide whether the fight was worth it or not. In true Team Rocket fashion they decided it was for the best to cut and run. They already had the Pokemon they’d come to smuggle in their car after all. No reason to fight a battle they were likely to lose.

Calling their Pokemon back, the Rockets made a hasty retreat toward their truck only to find it was… gone. In its place instead was a Lucario paw. An absolutely massive PokePaw. It was easily three times larger than their truck had been, covering their escape route with no effort. With gaping mouths the two followed the Lucario’s leg skyward to see a smirking face looming over them. The little path was shadowed easily by the svelte body of the 50-foot fighting Pokemon, spotted neck, arms, tail and pants eclipsing the sun above.

And next to him yet another Lucario was waiting to block their path. This one seemed to have their truck held between two fingers green fingers, a long swishing tail behind. The brown and green color scheme was pretty odd to look at; definitely not a shiny Pokemon. But then again the more important factor was the fact he too was at least 50 feet tall. This one had a more curious look on his face, as if wondering what the two littles would end up doing now. The Lucario pressed his fingers together, crushing their getaway vehicle like a miniature tin can. That seemed to please the titanic Pokemon as he smiled at the crunching sound of metal and rubber being decimated.

Now completely trapped by a trio of oversized Pokemon, the two Rockets turned back toward Chesquinn. They were just about to try and plead for mercy when instead all they got was a large blue rump landing on top of them. The Cobalion wiggle squirmed atop his prisoners, the fabric of his faux-leather armor digging into the two smugglers.

“Justice is served yet again,” he proclaimed happily.

“Yeah, that was awesome guys. Good job blocking their escape Vinci, Brang! Couldn’t have worked out any better,” Chesquinn said. He brushed off his hoodie as if congratulating himself. “Man, being a trainer is way easier than I expected it would be. Didn’t even have to break out the big guns.”

All three of the plus-sized Pokemon rolled their eyes. Chesquinn was a friend so they’d keep humoring his Pokemon trainer fantasies for now. As long as it didn’t get too dangerous, and he didn’t get too big of a head for such a small Chespin. 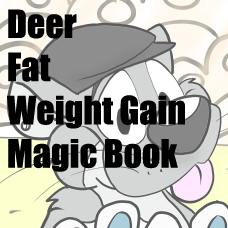 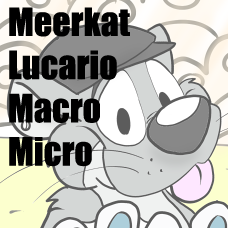 Team Rocket has never had to deal with a Pokemon team quite like this before. Chesquinn brings out his giant Pokemon and shows some criminals why they shouldn't break the law.

Here we go, a quick little scene for Quinn. Since I did enjoy all the Pokemon pictures he did back in the day.
Also including Bomba's characters Vinci and his Cobalion
Along with a Lucario version of Tyrnn's Brang