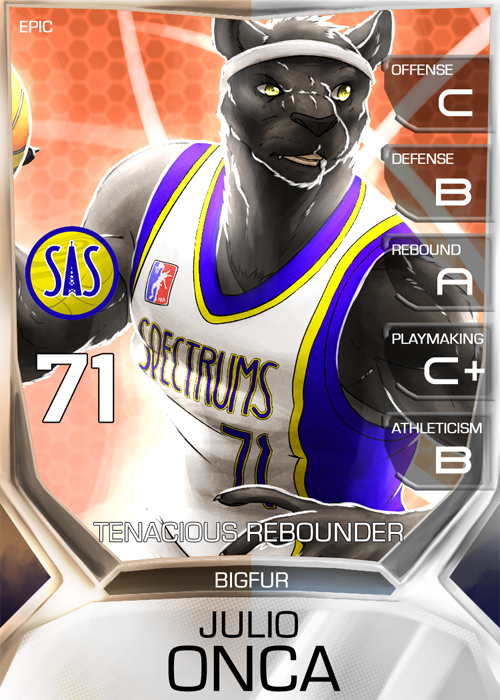 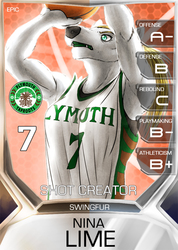 I don't have much to say here, other than that I've been wanting to do a proper pic of Onca for quite sometime now, as his story is one that I like. He's been depicted in all the jerseys of teams he's played for before (Howlers, Alphas and Wildcards) except the Spectrums (and Mayors), so I guess it was as good as a time as ever to pull this one outta the bag of plans n.n/

Also finished this pic in one sitting, and that took well over 12 hours (5100x6600 canvas and all manual inking for all jerseydetails, plus external distractions XD)

Used this picture of Marc Gasol, same height and weight as Onca, but more greatly exaggerated the pose, and slimmed Onca in comparison to Marc, increasing muscle density instead, giving Onca a leaner, more toned build.

Julio Onca is the only son of Roberto Juan Andres Onca, the last patriarch in a long line of Colombian businessmen dominating the textiles industry of Medellín. Inheriting the successful Onca Fabrics, S.A. corporation unusually young after his father suffered from chronic illnesses, Roberto raised his son Julio in a world of luxury with a magnificent house in the jungle, tended by servants and house staff.

Along with being a powerful businessman, Roberto was a much beloved philanthropist, donating much of his wealth to the poor and needy of Medellín. A socialist at heart, he taught his son that wealth obligated them to caring for those who had little. Quickly growing into the tallest and strongest member of the Onca family, Julio was a regular sight in the city, carrying lumber for his father's low income housing projects and bags of rice and beans for his soup kitchens. A feline ahead of his time, Roberto professed equality among all species, teaching his son to treat prey and predator alike and respect each individual for his or her heart, not his or her race.

Robert expected Julio to take over the family business once he retired, and in preparation he paid Julio's way to a university in the United States to study business. While there, the campus' basketball coach heavily recruited the towering, muscular black feline. Despite never having played before, his natural strength and feline agility proved to be unstoppable on the hardwood floor, and his quick mind and sharp eyes made him an excellent team player. Enjoying the sport, he pursued it heavily after his father gave his blessing, even making the trip from Colombia to watch his son play in a Sweet 16 match.

While Julio excelled at school and basketball, things were not going well in Colombia. With the rise of Chinese manufacturing, the textile industry shifted across the Pacific, stealing profits from Onca Fabrics. With the flow of money dwindling, Roberto was forced to close many of his housing projects and soup kitchens and lay off many of his workers, some having worked under him for family generations. When Roberto traveled to China to discuss selling Onca Fabrics to one of their competitors, he was horrified by the conditions shown to him by the company's rabbit board of directors. Witnessing the slave-like conditions of the workers and the sheer greed of their employers, Onca cut off all discussions. But with his family empire collapsing around him, Roberto could take it no more.

In Julio's senior year of college, months away from receiving his business degree, he received a phone call from a secretary telling him his father had been found in his top floor office having shot himself through the head. Julio was so distraught, he shattered a glass window with his fist, cutting up his hand and preventing him from playing the remainder of the games of that college season.

By the time the lawyers picked through the remains of Roberto's assets, there was little left for Julio. The company was soon liquidated, the facilities auctioned off to Chinese interests. With nothing left in Colombia to return to, the college basketball coach advised Julio to try taking his basketball skills professional. Julio submitted his name to the 2000 FBA Draft, but where once a handsome, smiling panther once had been was a scowling, angry jungle cat. He was drafted in the first round, but shortly traded to the Montana Howlers who had just picked up Shane Rufus (Red Wolf, G) and were still actively pursuing big, vicious players.

Julio did not disappoint. His heart chilled by the loss of his beloved father, the big cat turned from grace to raw power in his rookie year. Encouraged by the Howlers to use his size and might, he did it in spades, shoving over opponents, racking up fouls in harsh, physical play. He quickly gained a reputation for being one of the most vicious and intimidating players in the league, often looking as if he were more interested in injuring his opponents rather than winning the games. And at the time, that was likely true.

In the Western Conference semi-finals of 2007, Onca gave a near-fatal clawing to Stanislaus Thrust star player Buck Hopper (Rabbit, G) late in the fourth quarter. The bloody event resulted in a year-long suspension for Onca, the big cat not appearing at all for the entire 2007-2008 season. He returned for the next season, but once again clawed another star player, this time John Stoat (Stoat, G), permanently damaging his left eye. After another long suspension, the Howlers had had enough and traded him to the Huntsville Mayors in 2010.

Since then, Onca bounced around the league, playing with the Albany Alphas, the Santa Ana Spectrums and finally for the Las Vegas Wildcards before announcing his retirement in 2014. While many say he did start to relax as a player once leaving the Howlers, who then struggled to ditch their "savage" image with a more prey-friendly roster, Onca still left the FBA with the reputation for being one of the most vicious, angriest players to have ever been on the court. Notoriously quiet and not fond of the media, the big cat has steadfastly refused to give interviews or explain himself, even in retirement.

Reportedly, a few months before his retirement announcement, he surprised Buck Hopper (Rabbit, G) by appearing unannounced to his annual Easter party. Party goers say their meeting was cordial.

During Onca's short stint with the Santa Ana Spectrums, he worked well enough with the rest of the team to lead the Spectrums into the 2012-2013 playoffs.

Amongst the individuals in the Spectrums staff, Onca got along better than expected with the then 70 year old Ast Coach Randall Yoster, who may have possibly been the one individual who influenced Onca the most with regards to his anger issues.

With both Yoster and Onca retiring from their respective positions at around the same time frame, Yoster requested and managed to convince Onca to try out for the position of Ast.Coach for the Spectrums, to aid his former Coach Alan Foster, and to show the FBA and it's fans that he can make a difference, for both himself and for his late father, Roberto Onca. Julio accepted, and after a shakedown run of fitting into his new post for a week, he was formally inducted into the Spectrums as it's Ast.Coach on Sunday, the 23rd of November 2014.