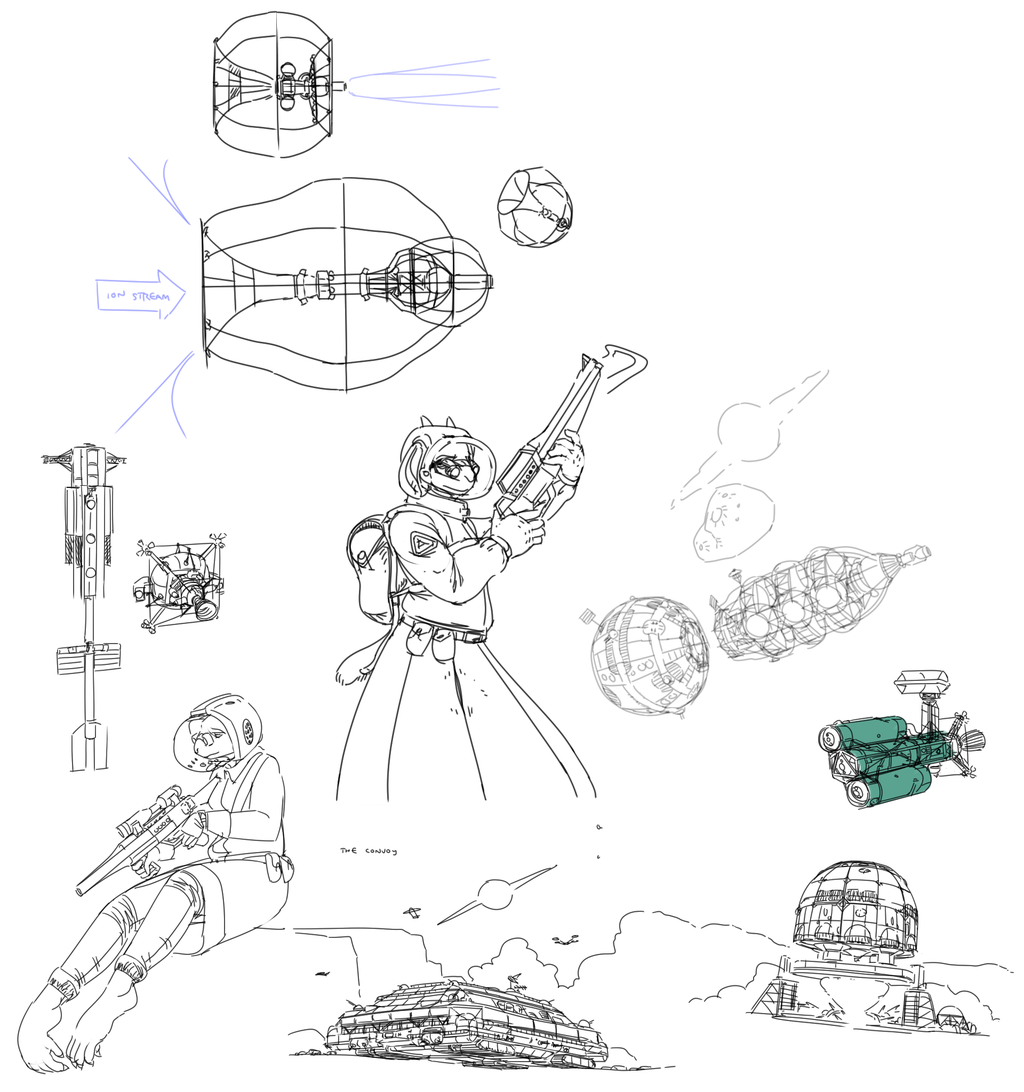 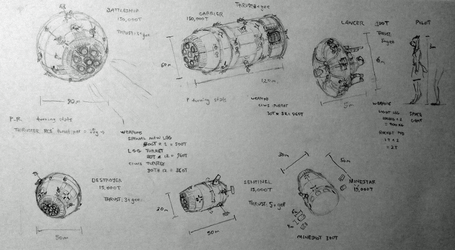 Lots of doodles i did of spacecraft/stations, outfits, and other stuff. All except two of these things are related to the Bubbleverse; the two that aren't are the crawler-transporter on the bottom center, and the Project Orion city-ship launching on bottom left, both of which are related to an upcoming quest. The funnel-mouth spaceships at the top are a depiction of Ramliners from the Webwork. Everything else is Nocebo goats:

-Infodump follows-
• Military goats. Despite the helmets, they're ground troops, with holes/grills in the bottoms of the visors for breathing, and special covers over the ears to allow sound in. The visors swivel from the top and snap on at the bottom, and can be fitted with a tinted cover to protect the wearer's eyes from their sun's regular flares. Covered windows/caps in the top of the helmets admit the wearer's horns, which are sensory organs that detect oncoming flares.
Most goat-inclusive cultures recognize the loose or broad-rimmed skirt as power clothing, and it is commonly incorporated into their military outfits. They are made with pockets, which are visible on the middle goat.
Although close-range Nocebo weapons tend to use bullets of the kind most humans are familiar with, longer-range guns tend to be Gyrojets, and fire rocket-propelled bullets that require a long distance to accelerate to lethal velocity, but are more silent and generate less recoil in Drywinds' and Waterfall's low gravity. The holes in the barrel on either side of the bullet chamber allow rocket exhaust to escape.

• Battleship docking with a Tanker. Many Nocebo battleships are built as 80m-wide spheres, requiring the least mass of armor per unit volume, although machining pieces to fit the spherical hull incurs a roughly 20% cost spike per kilogram. The grilled patterns across the ship indicate areas where the spacecraft vents excess heat, especially important when its seven nuclear-mechanical reactors are providing maximum steam power.
This battleship extends its heliograph-signaling rectangle while approaching the Tanker, which does the same. Heliographs, or mirror-signals, are the most reliable method of translunar-range communications between space vessels in Nocebo, where radio has not yet been developed.
Tankers are massive assemblies of propellant tanks, pumps, and docking equipment held together by a latticework of struts, and a small crew module nestled afore of the engine tank. A small cupcake-shaped space tug is visible hanging off the side of the huge vessel, near the front.

• Lancer approaching a space station. I haven't worked out how space stations look in detail yet. This Lancer, viewed from the rear, uses a donut-shaped fuel tank, with maneuvering thrusters mounted outboard on pipe-struts. Without electric systems, the Lancer's machinery is controlled by pulling on wires, mounted on pulley-stilts. Two periscope-like mirrors are mounted on either side of the small vessel, allowing the pilot to see behind themselves.

• Green spaceship: a Fast Courier, a medium-size vessel that carries first-class mail between Blue Yonder's satellites, and is a necessity for bulk communications between people in Nocebo space. The dish-shaped system is a solar boiler, which powers the ship's mechanical systems.

Spacecraft and machinery are some of my favorite things to draw, and drawing these was awesome for me! These were all done in Nyanchat with friends.