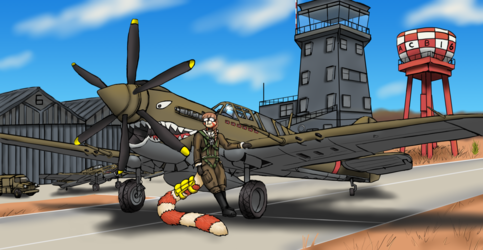 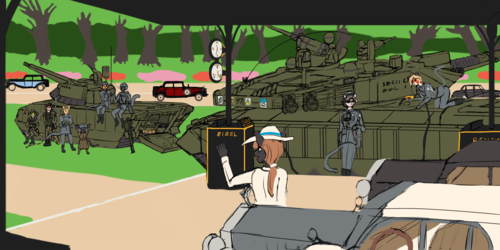 An overhead view of the Aludran flagship at the Battle of Omar, ANV Grimalkin, and two of her escort cruisers. At 1,522ft, Grimalkin and her two sisters Sabre and Fury were at the time the largest warships in service, with the exception of the Chiran mobile shipyard Null which, even today, Chira denies the existence of.

The unorthodox design of these three leviathans reflected Aludran experience during the frequent surface battles in the Strait of Huron, which showed the vulnerability of flat-top carriers with exposed catapults. Her payload of Griffon UCAVs allowed a departure from the upper armoured recovery deck / lower launch deck pattern normally used, in favour of a system using 20 3-cell armoured box launchers on her flanks, ten to a side. This allowed the giant carriers to potentially launch 60 aircraft at a time with a potential compliment of 600. This and the use of VTOL recovery freed up the front of the ship for gun armament, allowing the use of the brand-new 550mm Advanced Gun System on these vessels.

One point of interest is the helipad symbols: these are actually two Chiran pagan protection wards set at 180 degrees to each other that say "protect within" in one of their ancient languages. This was because the inventor of the first Chiran quad-copter was fond of old traditions and hoped it would help her prototype to stop crashing. Aludra copied the marking since they assumed the Chirans knew what they were doing, and by the time they figured out what the symbol actually meant it was a standardised marking and too awkward to change. The reason Grimalkin's helipads are so large is that one key method of resupplying capital ships is through the use of skycranes deployed from transport Leviships.

Some time later Grimalkin would be known as the final boss of Bold Fleet 5, the first Chiran videogame to have one since the normal Chiran storytelling tradition is for the final challenge of the heroine to be trivial to show her mastery of the situation.

Alongside her now is another unusual Aludran warship, the Typhoon-class Assault Amphibious Transport Dock LPD-A 630, ANV Radiance. This vessel, formerly the battleship Lady Skadi, was converted to a giant amphibious transport dock with seventy-five CIWS installations (sixty guns and fifteen high-energy lasers) mounted on her bow, with the goal of escorting her landing craft to shore against heavy enemy counter-fire. Due to their massive anti-missile armament, LPD-As tend to escort capital ships when they are not actually involved in landings.

During the Battle of Omar, Radiance ran aground on Sword Beach* to provide direct fire support from a position where nothing short of her complete destruction would stop her protecting the Aludran landing force.

*The four landing beaches were named after the traditional suits of the Aludran Tarot: Wand, Sword, Chalice and Crown.