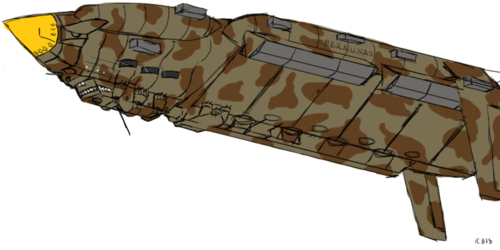 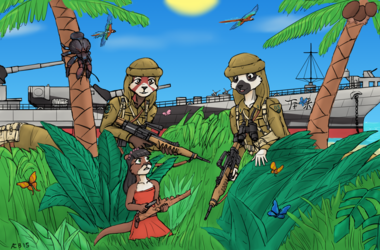 Linthan Air Destroyer Nitra* , the 311-foot armoured aerial cruiser shot down by the Queen's Lance during the Battle of Oaken Mill.

Typical of Leviship designs created under the "like for like" principle of the Basram code of chivalry, Nitra was exclusively designed to fight other Leviships, and featured no weapons on her underside. Unlike the Aludran philosophy which emphasised speed and manoeuvrability, harking back to the days of broadside Leviships where aiming one entire side of the ship was the main goal, Nitra was designed primarily as a stable firing platform for heavy guns. She used continuous heaters running her entire length and props run directly off her boilers rather than the gas engines used by Etrusean hybrid Leviships or diesels used by Aludra.

The large fin on her underside is her "docking pin" used for securing her stern, since the decorative bow is unsuitable for doing so; her bow would be secured with ropes while she was docked. Visible armament is a bow battery of four 12-inch chase cannons, six 6-inch guns, two on the flanks and twin guns in each of her high-angle turrets, and eight short 4-inch guns in her side turrets.

Nitra is one of two patron goddesses of Janek (the other is Lady Daishi of the Fens, her mother). The figurehead, half of which is visible here, shows her two aspects as the goddess of perseverance and plenty, shown as moth-winged vixens; statues show one gold and the other silver. In her aspect as goddess of perseverance (the one we can see), Nitra is the associated with many things, including justice, familial happiness, labourers and soldiers.

While it might seem odd to have perseverance in gold, this has a basis in Janek's history; the nearby mountains contain rich deposits of gold, the mining of which accounted for much of the city's early wealth. Since even commoners could possess small trinkets made of gold, nobles preferred the much rarer silver bought by foreign merchants, hence silver came to be more closely associated with prosperity than gold.

*Eye-tra in Linth, but the Aludran spelling is always used in modern times since Linth is a dead language.