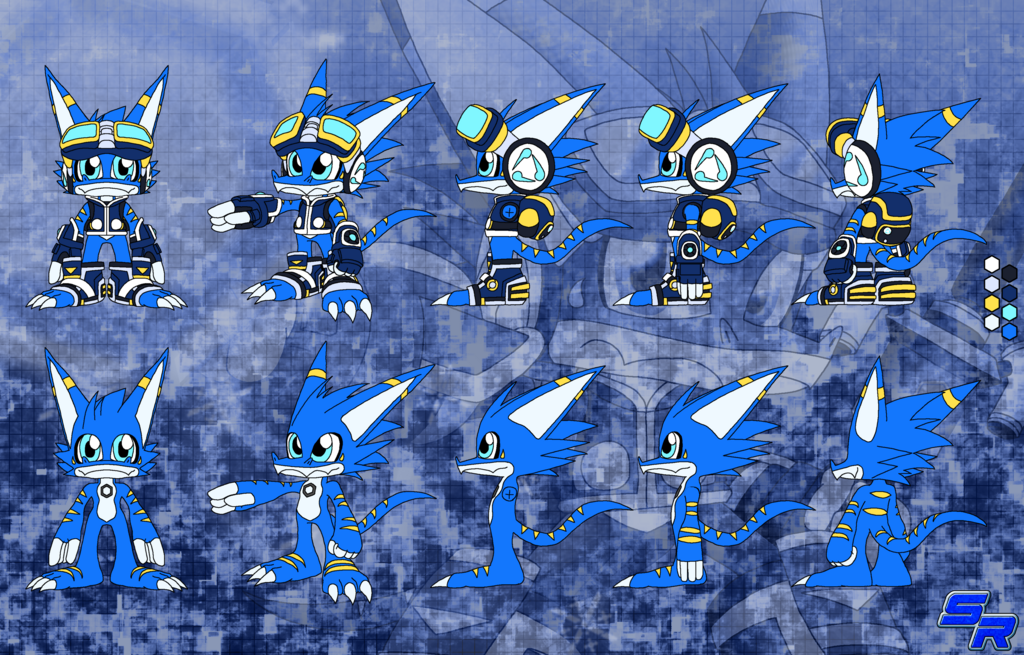 A specialized Digimon whose designed around the concept of Synergy, it is the successor to a prototype of the same name. Syndramon was designed to destroy Omnimon, its power was meant to surpass it and its other forms but little to the creator's knowledge, it also surpasses other Digimon. It has a strong hatred toward Agumon and Gabumon along with their digivolution line.

Syndramon utilizes its PSI, super speed, and power for offense and defense. It also uses a club called a Synerclub which can change into a few things, it also has the data of the prototype. However, despite being quick and powerful, its defense is very low leading it to use its PSI to buff it up for a while. Syndramon uses the power of Synergy with its guardian, Koseidramon, and the Synerclub which doubles their power. These team-ups can either lead to Koseidramon turning itself into either a weapon or vehicle.

Quick Slash: Performs a quick swipe with his fingers turning into claws.

Dragon Kick: Performs a dive kick at the opponent

Rising Star: Performs an uppercut that covers his fist in a bright light.

Syner-Warp: Teleports to another place when standing still. However, it doesn’t allow him to go the faraway places freely.It has to be near the original spot that it's at.

Dragon’s Guard: Creates a shield that protects himself or an ally.

Fire Shard: Fires a diamond-shaped fire that explodes into a large pillar of fire.

Apollo Sphere: Charges and shoots a deadly explosive Fireball from the hands.

Pyro Ring: Fires an arrow that sends a small swirl of flames in a circle outwards that will ignite the ground beneath a foe on contact.

Hot Swing: Charges his Gyaku with psychic fire energy and swings it at full force.

Shocking Kick: Performs a flip kick with its feet that are covered in electricity.

Lightning Swing: Charges his Gyaku with psychic electric energy and swings it at full force. It’s has a chance of paralyzing the opponent.

Chilling Blast: Focuses his energy into its body and unleashes a cold explosion. It's less powerful than Shining Burst but stronger against fire types.

Cold Swing: Charges his Gyaku with psychic ice energy and swings it at full force.

Nature’s Blessing: Heals himself or his ally.

Pharaoh Hands: Gains great strength which allows him to pick up, throw, and hit foes ten times his original strength.

Quake Smash: Hits the ground that causes an earthquake to stun opponents.

Shining Burst: Focuses his energy into its body and unleashes a bright explosion.

Little Light: Fires a small bright from his finger that explodes.

Soaring Wind: Fires a line of three tornadoes by lifting his arm upward.

Air Jump: Summons a tornado under himself to boost his jump.

Bubble Burst: Unleashes a few bursts of water bombs by firing towards the ground in front of the opponent.

Waterboard: Creates a surfboard out of water and rams it into the opponent by doing a trick.

Dream Arrow: Fires an Arrow at the opponents that put them to sleep.

Death Hand: Fires a deadly power of energy in the shape of a hand at the opponent.Has a chance to instantly killing the opponent, with a higher chance for it to occur the more damage the opponent has.

Revol Slam: Sends the opponent into the air and smashes them down with a powerful overhead.

Stunning Club: Strikes the opponent at the head which stuns them.

Imperial Pierce: Performs a quick and strong thrust at the opponent.

Club Frenzy: Focuses energy into club and rapidly swings at the opponent with the last hit being a strong overhead.

Thunder Slam: Charges club with psychic electric energy and slams it into the ground, sending a bolt of lightning at the opponents.

Lighting Rod: Charges up stick and fires a lightning bolt toward the opponent.

Para-AMP: Charges up stick and swings it at the opponent which paralyzes them.

8000 Striker: Charges stick up to a high level and unleash a barrage of lightning strikes.

E-Theif: Thrusts stick upward and drain a large amount of the opponent's health and energy.

Robo Killer: Jumps forward and savagely swings at the opponent.Strong against robot Digimon.

Metal Doctor: Fires a ball of electricity which prevents the opponent from moving before coming in and ripping out what's inside them. (Only works on robot and cyborg Digimon.)

Mighty Slash: Leaps into the air and strikes the opponent with a powerful downward slash.

Earth Slash: Charges up and winds up blade then strikes the opponent with a strong blow.

Hurricane Crush: Spin blade around rapidly and hits the opponent multiple times while surrounding itself with wind.

Psychopath: Performs a quick slash at the opponent before rapidly cutting away at them viciously until ending it with a horizontal slash.

Grand Impact: Jumps high into the air and lands with a downward thrust that unleashes a huge explosion on impact.

Synergy's Cut: Slashes the opponent and takes half of their health and energy.

Electric Needle: Quickly thrusts blades at the opponent.Has a chance of paralyzing.

Frost Blade: Cuts the opponent with a blade covered in ice PSI.

Flame Blade: Cuts the opponent with a blade covered in fire PSI.

Iron Blade: Cuts the opponent with a quick slash.Strong against Metal Digimon.