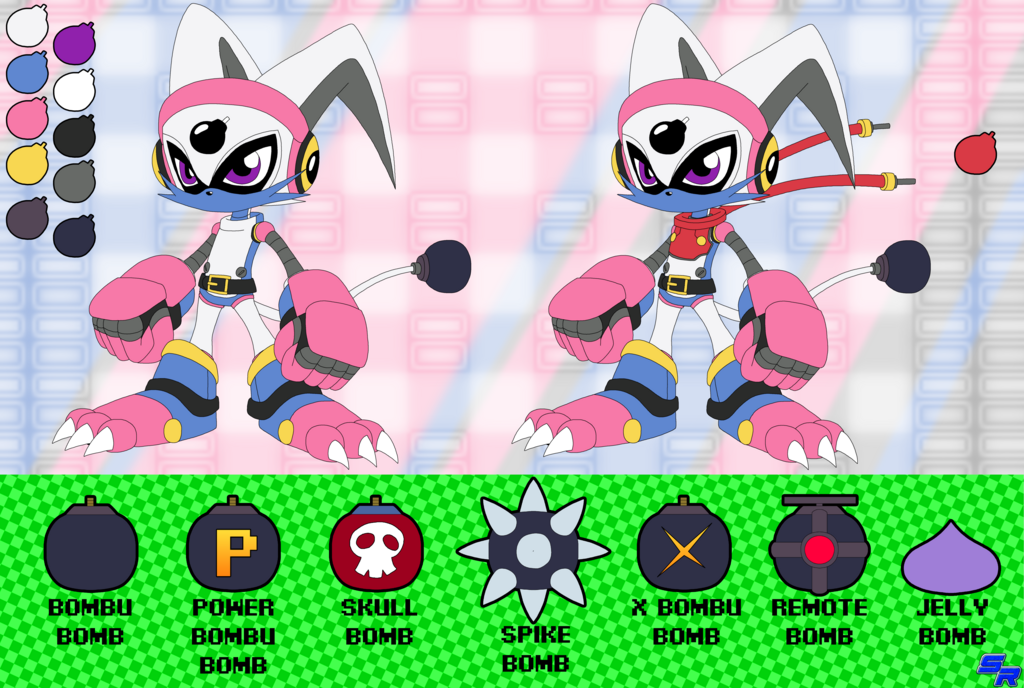 Here's Bombumon again with a all new look.This is the final design for him as I like how it came out.

A Digimon with the ability to summon bombs at will and a passion of becoming strong.Bombumon is a demolishion expert when it comes to explosives,thriving on battling others and exploring caves.Bombumon is a digimon that has strong power,this comes from his bombs as they're explosion range from small to large.It can create different types of bombs that have their own function.These can change the tide of battle as it'll see what fits for the situation.

Besides its explosives are a few tools it that it use to defend itself.One of them is a shield which can block any projectile.Another tool is the rocket which can launch itself in the air to avoid harm,using it to strike enemies won't do much damage.

The digimon has three deadly moves,one of them is the Skull Bomb which can destroy anything in its huge explosion.Bombumon is best used solo in fights with groups of enemies.

Bomb Throw: Summons a bomb and throws it at the opponent.

Bomb Kick: Kicks a bomb at the opponent.Can reflect other explosives.

Bomb Punch: Punches opponent's bomb or missile back at them.

Bomb Spread: Winds up arm and throws multiple bombs at once at the opponents.

Explosive lunch: Steps on the opponent's foot and shoves a bomb down their throat and backs away from the explosion.

Air Raid: Jumps into the air a rapidly throws thousands of bombs at the opponents.

Jelly Pass: Kicks a jelly bomb around and sends it at the opponent.

Skull Bomb: Summons a dark red bomb with a skull on it that unleashes a large deadly explosion on everyone.(Takes less damage from it.)

Bombu Rocket: Allows Bombumon to avoid a attack by lauching itself into the air.

I-Boomerang: Strikes opponents and steals their items upon contact.

Stone Breaker: A giant metal hammer made to destory obstacles made of rock.