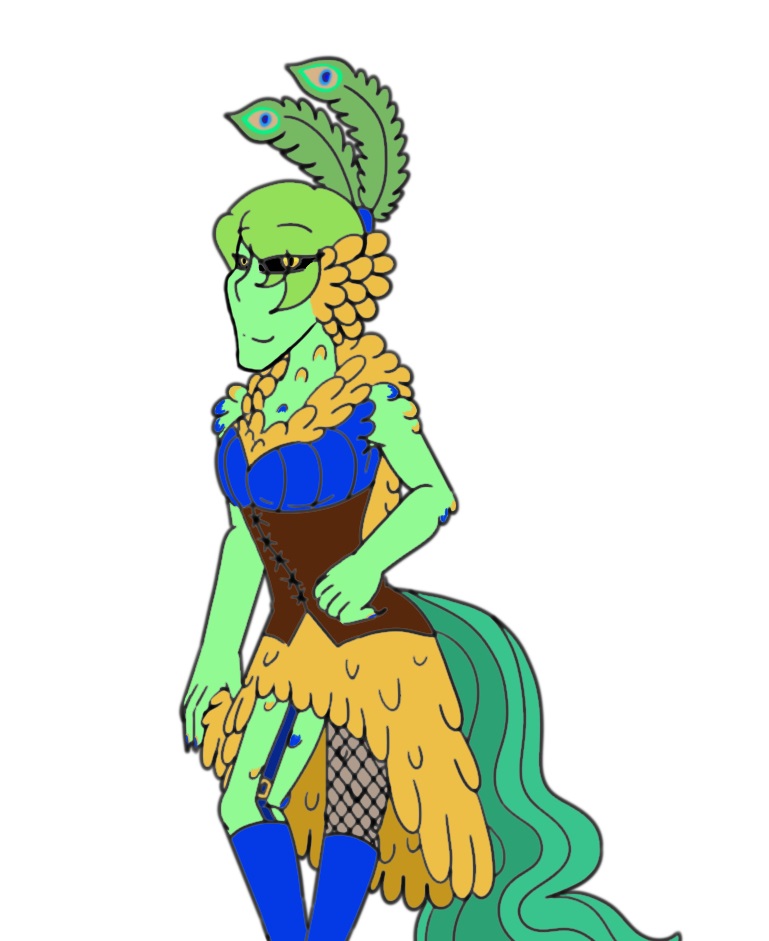 Went by Clyde in life once she and her sister were labeled as phantoms of the recently deceased crime duo
She/Her
Continues to go by Clyde in hell, is called doll and dollface by Cherri Bomb
Committed the sins of murder, theft, and arson
Died during a shootout between her and her sister against police, reminiscent of how the actual Bonnie and Clyde went out
Older sister of BubbleQueen's character, Bonnie
Near inseparable with her sister Bonnie
Loves her sister more than anything and would do any and everything for her at the drop of a hat
Lived in the 1950's/1960's
Transgender identities weren't really recognized during the time she lived, so she was usually labeled as a man, and she was called a man by most everyone besides her sister, her gender identity is usually disregarded in hell just to spite her
She still very much has a amab body in hell, as hell is meant to punish, it's an extra punishment heaped on
She and her sister were made before Helluva Boss came out, so Stolas' design had no influence over them, which is why we didn't go with beaks or bird feet
Is mainly a lesbian, and is in an on and off (usually on) relationship with Cherri Bomb
Fiercely hates most men because of how she and her sister were treated in life by mainly men, being harassed, attacked when they realized Clyde was in fact amab, assaulting her and her sister, being insulted, etc. etc.
Is Bonnie's older sister, and will do anything to protect her, especially with how it was ingrained in her that she was meant to protect Bonnie no matter what, and with the times she feels like she failed her, such as when Bonnie was assaulted, etc.
Started killing when Bonnie attacked and killed a man who was harassing her (Clyde) and the two of them burnt down the bar on their way out
Can improvise a Molotov cocktail out of mostly anything, and that is nearly the only thing she will willingly tear her dresses for
Has a car, it is bright green, and is very much like the one she had in life, only Bonnie is allowed in it besides herself and she always drives
Used to play a murder game with her sister where one of them would pick up a man at a seedy bar, sleep with them, and the other would wait outside and kill him when he left
Does not care for Angel Dust, Magnolia May, Husk, etc.
Is not checked in at the Happy Hotel, and has no plans to check in
Feather tips shift between blue and gold depending on light
Hates all the men her sister has dated, only vaguely likes Stolas and Blitzo, because they actually protected Bonnie at some point
When mad or flustered, her tail can flair up like a peacock
Works occasionally with I.M.P with her sister