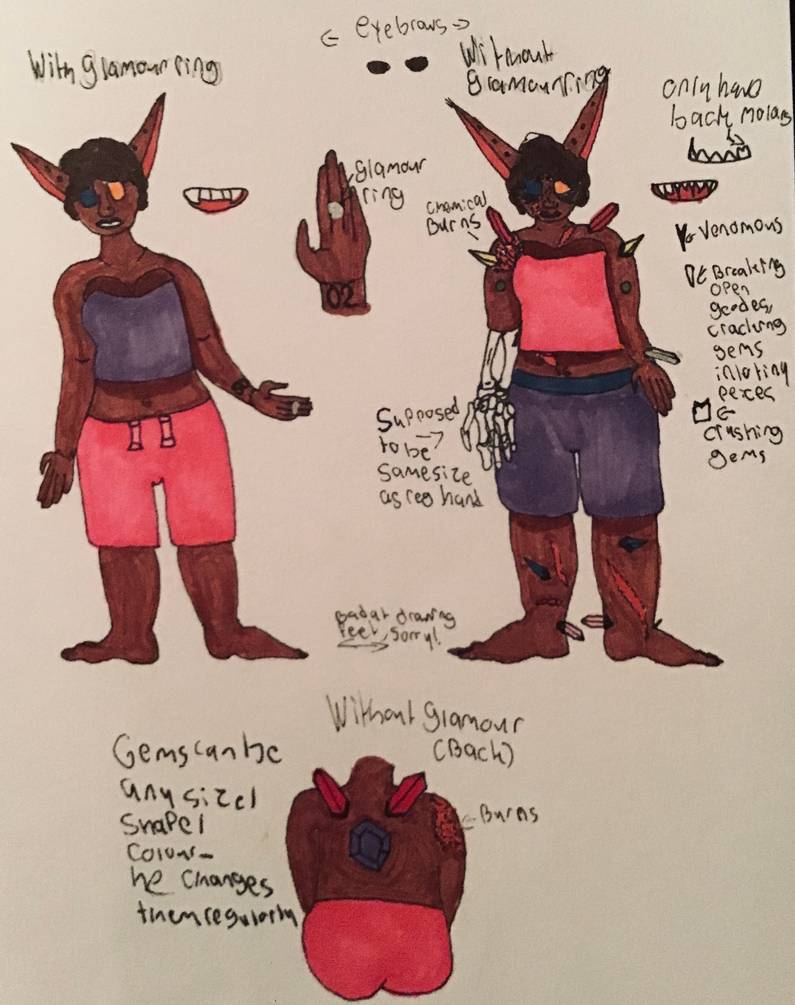 The main antagonist of my novel.
32. Has gem eyes (sapphire and topaz, eyes can switch sides) and a skeletal left hand he hides with magic. Short, stocky, with pointy ears and sharp teeth. Has the numbers 02 tattooed on his right wrist. Part goblin. Dark skin, black hair (ive been attempting to give him early greys and crows feet, which have turned out looking like feminine eyelashes). Gems breaking the surface of his skin and ears (those aren't piercings). The silver ring is the charm he uses to hide his skeletal hand.
Wears mostly crop tops and hotpants-wears cargo hotpants when travelling-and only binds very occasionally.
Loves knives, cold weather and fighting. Obsessed with fairness, justice? and balance. Is blind, followed around by four scanners that act as guide dogs. Despite his looks, is extremely intimidating in person. His favorite food is peridot. He is always serious and sure of himself. Rarely ever makes jokes. Enjoys listening to cc old detective movies
In an on and off relationship with Nicola de Santis. Currently on. Doesn't show emotion a lot, though by his own admission he feels things very strongly. Forces expressions around Nicola. Dante is his son, Fiorella is his stepdaughter. Fiorella hates him.
An Enforcer of the Queen's Justice. The Head Enforcer for Tiawe, in charge of catching criminals, protecting the town from Beast attacks, and escorting Seekers through the Underground.