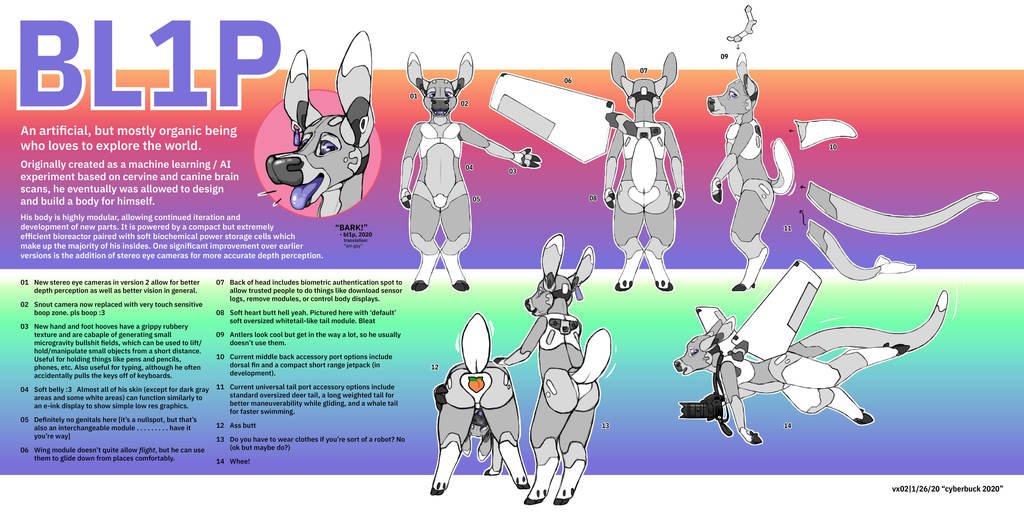 An artificial, but mostly organic being who loves to explore the world.
Originally created as a machine learning / AI experiment based on cervine and canine brain scans, he eventually was allowed to design and build a body for himself.
His body is highly modular, allowing continued iteration and development of new parts. It is powered by a compact but extremely efficient bioreactor paired with soft biochemical power storage cells which make up the majority of his insides. One significant improvement over earlier versions is the addition of stereo eye cameras for more accurate depth perception.

03 New hand and foot hooves have a grippy rubbery texture and are cabaple of generating small microgravity bullshit fields, which can be used to lift/hold/manipulate small objects from a short distance. Useful for holding things like pens and pencils, phones, etc. Also useful for typing, although he often accidentally pulls the keys off of keyboards.

04 Soft belly :3 Almost all of his skin (except for dark gray areas and some white areas) can function similarly to an e-ink display to show simple low res graphics.

06 Wing module doesn’t quite allow flight, but he can use them to glide down from places comfortably.

09 Antlers look cool but get in the way a lot, so he usually doesn’t use them.