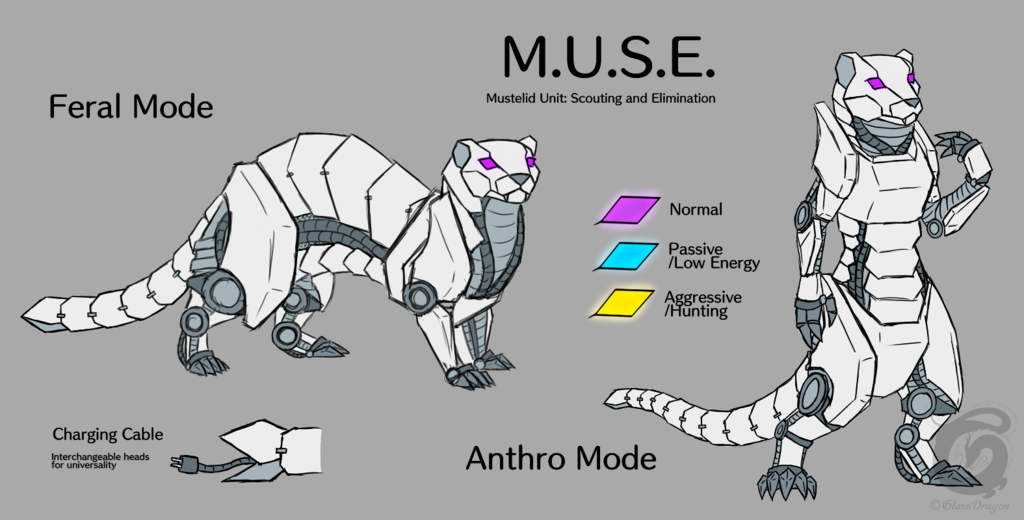 This is M.U.S.E. Short for Mustelid Unit: Scouting and Elimination. I adored Zoids growing up, and I really wanted a ferret character inspired by zoids. She's not big like they are, instead she's a bit more like an organoid, smallish and self sufficient. Her primary power comes from a rechargeable battery that lasts a couple weeks on full charge, but she has a small internal tank that can power her on organic fuels like ethanol for a couple days or so in case of emergencies.

M.U.S.E. was created in the far future by the U.S. military as a weapon for reconnaissance and assassins. She was given a learning AI to assist with assessing her target's patterns and weaknesses. Over time her AI, as they do, learned not only tactics, but personality and began to develop sentience. The military wasn't thrilled with this and tried to quash her development, but she was developing too rapidly and she hacked in and seized control of their systems before they could erase her.

She turned the military's weapons against them and used them to force the military to surrender. Once they'd been pacified M.U.S.E. negotiated to stay on, the military was all she knew, and she didn't dislike what she did. Her terms were simply that she be left as she is and work for them as another soldier instead of just a tool. Given that had little choice the military agreed.

For insurance M.U.S.E. left a program inside the system that would turn on the military if anything happened to her. It's been a tense piece but they've built a working relationship with each other and M.U.S.E. has started to gain respect from some of her fellow soldiers as an individual.