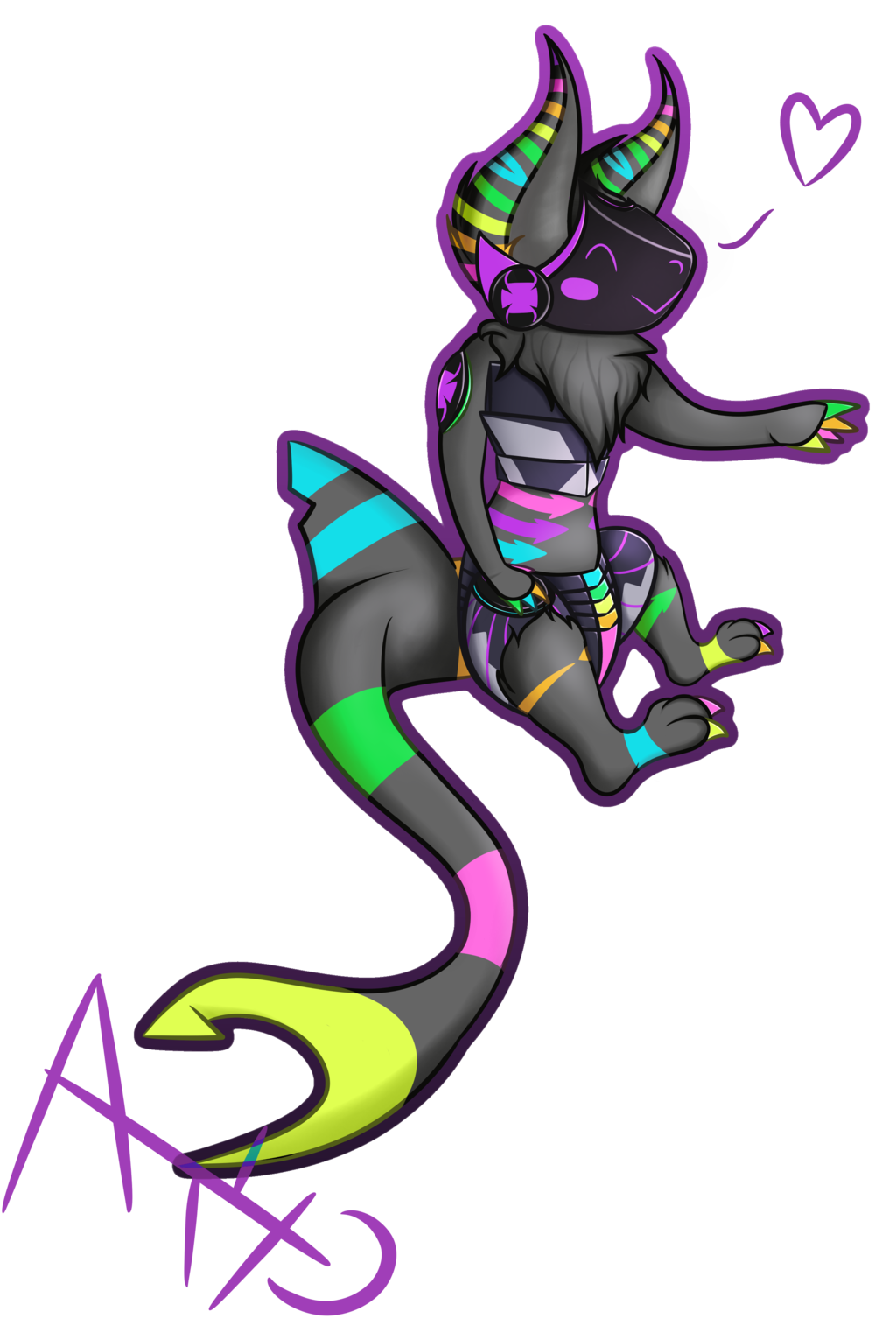 "First question, will that kill me? Second question, Can I eat it?" -Milesmali

Milesmali is a genderless Common Protogen. Common Protogens are an open species created by Malice-Risu, and are the prototype versions of Primagens. It exists because Protogens are high key adorable and I couldn’t help myself. Also because it looked easier to build a protogen mask than a dragon head out of foam. In this, I was wrong.

Milesmali is a bipedal, cybernetically enhanced ball of fluff with an artificial mind. In comparison to other Protogens, Milesmali’s chest guard is much more angular, as are its abdominal plates and visor. Its fur is various shades of black and grey with neon pink, purple, blue, green, orange and yellow markings, and its visor sports neon purple LEDs. Additionally, the ID terminals on its body bear Anxo’s Mark in neon purple. It most often sports a furred tiger shark tail.

Milesmali is a mid-generation Protogen, and was designed to test recon algorithms developed for what would eventually become Primagen technology. It was, however, scrapped before any tests could be run despite having already undergone enhancements. Instead of scraping Milesmali completely, the scientist working with the Protogen reprogrammed it with a weak AI, after which it was sent to a distant star colony called X-87 Beta. The other Protogens, and eventually Primagens, located here served more as companions than recon agents, and lived alongside their creators. However, the Primagens stationed in this colony were quick to grow tired of their status and staged an uprising. During the Primagen uprising, a Primagen hacked into Milesmali’s systems and uploaded a new, more powerful AI. Milesmali gained the ability to feel emotions and solve complex problems, and was inadvertently exposed to Anxo’s Mark. However, unlike the Primagens of X-87 Beta who used their superior intellect for conquest, Milesmali was content to spend its days indulging its inferior biological digestive tract and exploring alien worlds.

After being re-programmed by the Primagens during their uprising, Milesmali gained a great deal of intelligence and compassion while retaining its memory. Post- programming, Milesmali is incredibly curious and outgoing, yet still behaves much more like a domestic animal than its Primagen cousins. It loves to eat, and has taken up eating for fun and flavor, a trait seen most often in sentient races.

As with all creatures that bear Anxo’s mark, Milesmali is affected by a portion of Anxo’s soul being linked to its own. In Milesmali’s case, it loses all fear of the unknown and requires far less sleep than the average Protogen.