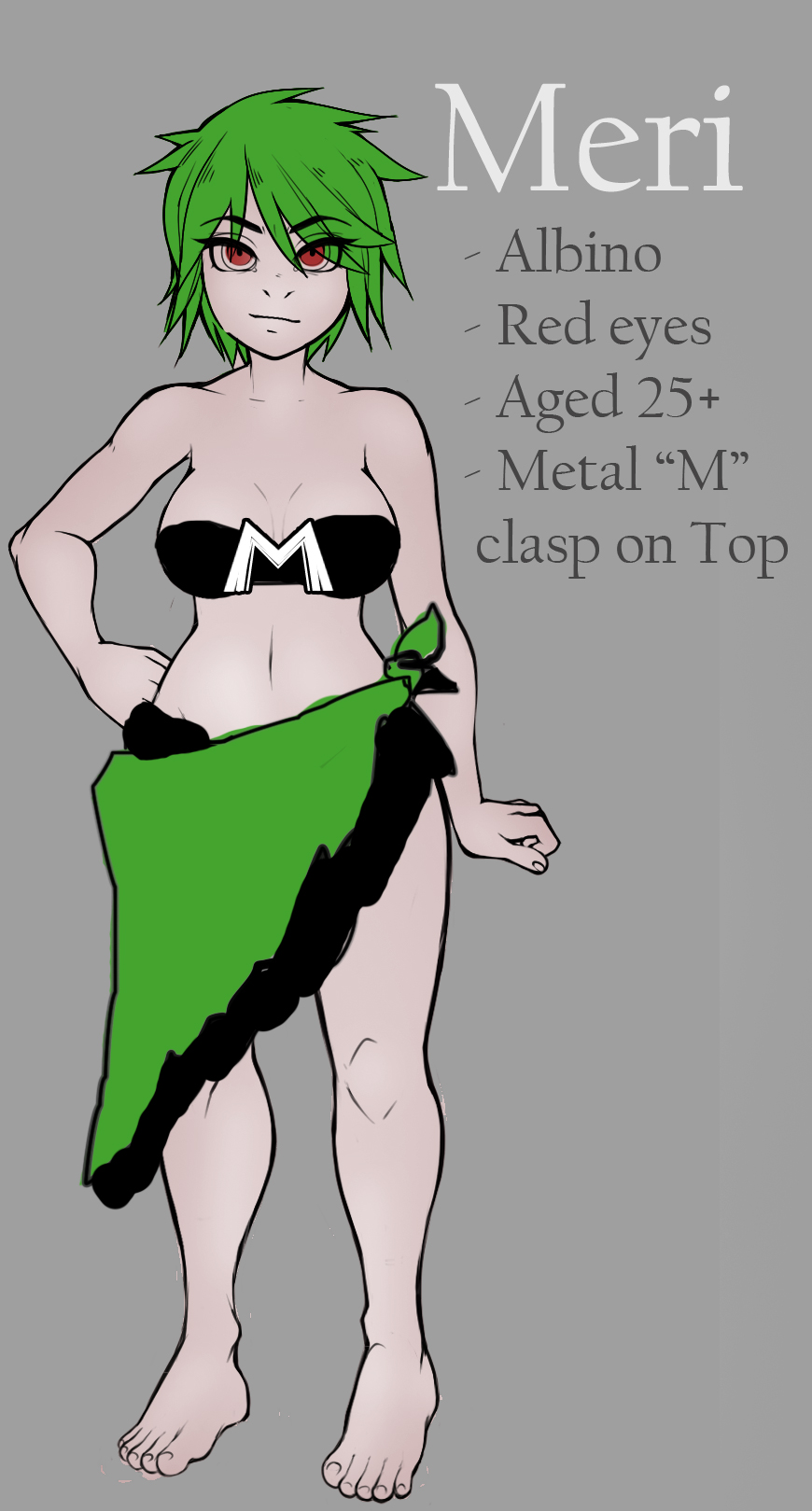 Add this to the list of things I need to get art of so it's not so crappy looking.

Meri is a 25+ year old girl who works at a fetish club. She is naturally albino, and dresses herself up as a zombie for the club. She beings as a girl who plays dumb, like the zombie she frequently portrays. But she quickly becomes Q's favorite call girl, and as their odd relationship strengthens, she develops an attitude and a strong will.

Over time, she becomes a very stubborn, mouthy, strong-willed woman. She takes an interest in Q's work (assassination) and has been present for a few of his jobs. After knowing eachother for a few years, Meri becomes Q's confidant, and they share a mutually abusive relationship. She has bailed him out of jail at least once.

It was a dark hotel room, situated at the edge of the building. All the lights were off, the curtains were all closed, and sitting on the floor behind the scope of an M40 sniper rifle were two people.
Aside from a few whiskey bottles and open flasks, the hotel room had not been touched.

Of the two people, one was male, the other female. The male had grey hair and bright green eyes. A silver locket hung from his neck, with a green jem inside it. Normally it was hidden inside his collared, button-up, black-sleeved and red-torso shirt. But it had found its way out earlier, as the girl had been playing with it. It glinted slightly in the dark room as the man adjusted the aim of the rifle. His hands wore fingerless gloves. It was clear this man had no sense of fashion. But, compared to the girl, he was well-dressed. His dress pants were black, as were his boots. Aside from his premature grey hair, the only thing that could be awkward about him was the fact that, below his belt, a dark brownish-grey, almost black tail of a dog waved about haphazardly in a semicircle.

The woman, her skin so pale it probably could reflect moonlight, swatted at it playfully. The both of them were drunk, but the man - Q - seemed to be holding himself much better than the girl. The girl was an albino; so her eyes were an ugly pink. She claimed to be a zombie, and worked at a night club for exotic fetishes. She was off for now, however. Her hair was a wild forest green, and cropped to just her ears. It was almost as if she never bothered to brush or wash it. The bright green didn't stop at her hair. She wore a grass skirt and strapless bra, as well. Both the same shade of green. One could only wonder what her favorite color may be? Her name was Meri.

Q sat up, holding the rifle in place. "Here," he said. His voice was raspy. He was young, but anyone who heard his voice could tell he had been smoking profusely for the better part of his life. His alcoholism probably didn't help matters. He turned his head to face Meri's. He had tanned skin, black "whisker" tattoos on the bottom of his cheeks, and a diagonal scar across his face, which he attempted to hide by having his grey hair cover one eye.

"What?" The girl was giggly but still hesitated, putting a hand to her chin. "But I didn't think you were serious!"

Q grunted slightly. "C'mon. I said I'd let you come with me since you bailed me out. I brought you. I have aimed for you. It is all ready. All you have to do is pull the trigger. It will be fun." It was as if he were talking to a child, almost. "You will see his brains splatter everywhere. Isn't that what zombies like? Brains?"

Even though Q was smirking, he was still all business. He exhaled loudly through his nose and let one of his hands wander from the gun, waving Meri over. She obliged, sitting herself behind the butt of the rifle. Q carefully made his way behind her, guiding her hands to the right places.

"So, look through the scope. What do you see?" he urged her.

"Uhmm..." Her high pitched voice was almost annoying in contrast to Q"s prickley deep one. "Two men in suits. One has a hat. The other one's bald." She giggled at the word bald.

"The two lines that meet in the middle, they're crosshairs. When that is on the head of the guy with that hat, just pull the trigger." He leaned into her back. "But take your face away from the scope before you shoot, or else you'll hurt yourself."

Meri nodded, breathing loudly. "Will I really get to see brains?"
Q narrowed his eyes, trying to see into the scope from the distance behind her. He couldn't see much. "Yes. But pay attention. If you wait too long I'll have to do this for you." His voice was stern, as if he were becoming annoyed. "She'll mess up the shot before too long," he thought to himself.

"Then no brains?" She asked, putting her face to the scope once more.
"No brains," Q repeated dryly. He placed one of his hands on Meri's left breast with a snicker.

She pulled the trigger, the knockback frightening her to a point where she jumped and gave out a small shout, falling back into Q, who laughed.
The window in front of them shattered, and with any luck, Meri had just killed the mayor of a neighboring town who had come to Dexterity for 'business'.
Q gave Meri's naughty bits a slight squeeze before grimacing and pushing the girl aside, making sure she had killed the target. They would have to pack up and move quickly either way, but he had to be sure.