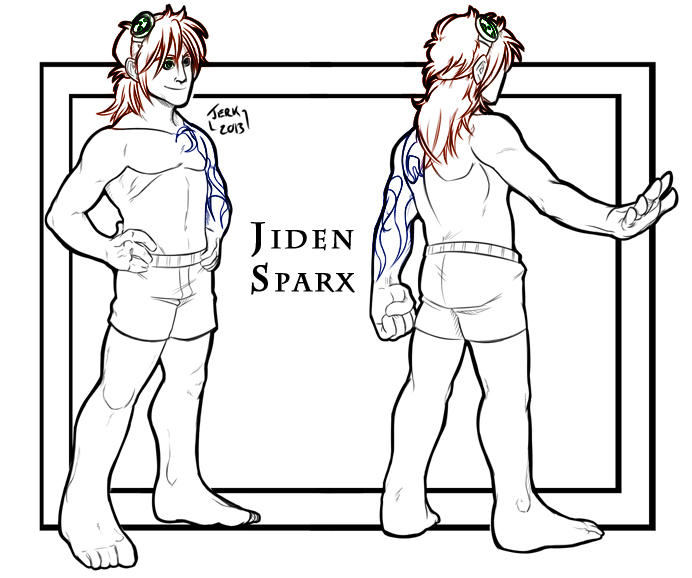 Art by Jerkcentral.
A condensed version of this information and/or Artist's reference page for this character is here.
Full bio with more images is here.
My website for all my OCs is Eidolon.
Below is the full bio for this character.

Robyn and Lindsey Sparx were a lovely couple married for 20 years. When their son, Jiden, was 10 years old, Lindsey fell victim to a brain aneurysm.

Lindsey was an electrical engineer and inventor. She had made many useful innovations that spanned several industries. At the time of her death, a pair of goggles were in the prototype stage. These goggles later became Jiden’s memento of his mother, wearing them all the time. Jiden’s father, Robyn, was a biochemist and a professor at a university. When Jiden turned 18, he, too, fell victim to brain aneurysm.

Jiden followed his parents’ footsteps, being a particularly gifted child. He quickly dropped from school and went into an accelerated learning course to pick up his diploma early and enter university into his teens. He grew to like robotics and computing, and started working underground as a cracker (black hat hacker) while building battle bots on the side. It wasn’t long before he lost interest in university and began doing his own thing.

Jiden’s father never asked too many questions. He was generally proud of his son and unworried. The family was quite wealthy and there was never any push to get a job. Robyn’s time was also full– Jiden was left alone to his own devices for most of the time.

The history of aneurysms is confusing and a little suspicious, especially since Jiden inherited everything from his parents upon their death. Jiden has been touch and go with the authorities because of this, but has never actually been charged. He currently still lives in his parents’ house doing his own thing.

He doesn’t appear too saddened by the loss of his parents, but maybe that’s just his method of coping.

Real name: Jiden Sparx
Aliases: “J,” “Jy” (like ‘gyroscope’), and sometimes “Jade”
Sex: Male
Gender: Androgyne
Occupation: None
Height: 5’4″ to 5’7″
Hair: long red/brown hair that goes down to mid-back.
Age: 18 – 25
Favorite color: green
Personality: easy-going, laid back, can be a bit of a clown. He is almost always in a good mood, smiling or owning a bit of a smirk. He will often downplay his intelligence, playing the dumb fool or pretending to be a klutz in order to fit in better with those around him.
Distinctive features: always wears green goggles; long blue tribal tattoo that spreads from right shoulder down the arm to the wrist.
Hobbies: building, maintaining, and dueling battle bots; hacking and cracking; electrical engineering.
Brief history:
Kid genius. Mother died when Jy was 10, father when he was 18. Jiden inherited everything. He claims to be an inventor but “hasn’t had any good ideas yet.”
Notes:
The goggles are a memento of his mother and he wears them constantly. They are a prototype invention of his mother’s. They are capable of taking several readings on equipment just by looking at them. Their most common use is as a multimeter.

Jy is a cyberpunk character and is open-ended to take advantage of almost any roleplay in that genre. Because of this, there will naturally be several small variations. His gender rarely comes up, and his sexual orientation varies, although he is usually asexual. I consider Jiden Sparx my persona.

My two favorite story arcs are these:
– Jy is studying full-time in University. A childhood friend drops on his doorstep after she was thrown out due to her mental illness. While Jiden takes care of her, she tries desperately to seduce him. Only problem is that Jy is 100% gay and taken. His boyfriend is out of town and he doesn’t want his friend to know his orientation.

– Jy is eating breakfast with his father (Robyn) when he suddenly falls dead on the table. Too shocked to do anything, Jiden simply leaves and tries to pretend it never happened. Later that day, Delilah (Deli), Robyn’s intern, stops by the house. They both are at the wrong place at the wrong time, and find themselves the prime suspects of Robyn’s murder.