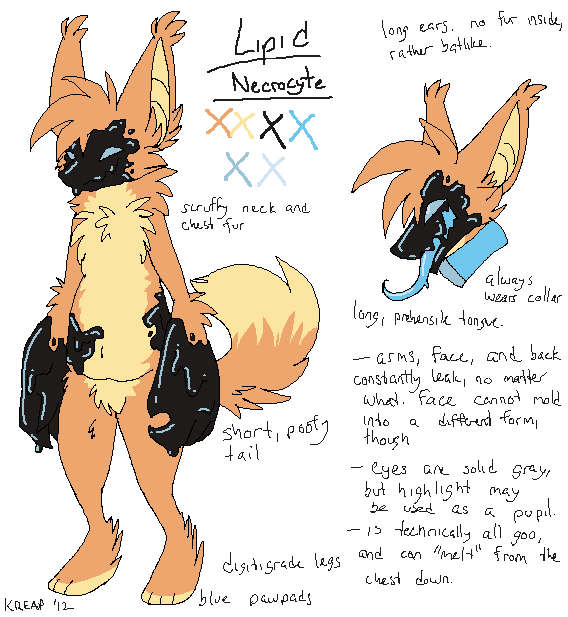 Name: Lipid (it’s an acronym for something fancy but I can’t think of anything for that)

Species: Necrocyte, but takes the form of a red fox

Personality: generally a curious, optimistic fellow. every little thing seems to amaze him and perk his interest, and is rather naive and gullible. he’s very responsible though, and is hardworking in going about his tasks. he feels extremely guilty if he messes up, and it’s easy to make him upset. He usually won’t stay upset for long though and forgets about it, and doesn’t dwell on sad feelings.

Body type: short (5’1”), has a small frame but is somewhat chubby. feminine hips.

Lipid is a necrocyte, also known as a ‘death cell’. A necrocyte is pretty much like a giant multi-celled amoeba whose job is to eat harmful pathogens in the body.

Lipid was created by some scientists in a time of dire need, because they needed to cure some really bad diseases, but the bacteria/viruses became immune to the vaccines and they were pretty much becoming superdiseases. People were dying fast, so they needed a solution.

What Lipid does, is he eats pathogens. He does this by making a small incision on the wrist, near the ulnar artery, and enters through there. (not all of him enters, just like a little drop.) He functions pretty much just like a leukocyte, except… well.. he’s not a leukocyte. If a disease is too far along, he’ll try and eat up some of the bad cells but that’s pretty much all he can do in that case. Also, he can’t do anything about genetic diseases because that’s all in the DNA (he can’t alter that shit okay he just eats stuff)

Every once in a while like he messes up and eats the leukocytes as well, but it usually doesn’t happen often. Even so, the patient usually feels better after the treatment. Also his cells usually linger around a little and act like guard dogs in the patient and are better than leukocytes since they recognize more than one disease.

In addition to eating germs, he also eats rotting stuff like moldy food and animal carcasses because they give him certain nutrients he needs that just antigens alone won’t give him. (I mean if you had to live off of bacteria I don’t think you’d be all that healthy either)

Lipid can’t get sick and nothing can infect him, and he’s kinda like a germ himself but he eats germs because somehow in my mind that works

Lipid was programmed to know what are bacterial cells and viruses, and knows to not damage epidermal cells or hair. His cleaning treatment leaves a bit of a burning sensation though, but it only lasts a few seconds and then stops.

He can’t reproduce asexually as a whole, simply because there would be too many cells to replicate on his own. Also, he lacks a reproductive system because why would he need a reproductive system anyway??? what benefit does that have DO WE REALLY NEED GOO/FOX/HYBRID BASTARD CHILDREN EVERYWHERE

Lipid has some “leaky” areas on him, simply because in order to stay alive the cells have to constantly move. So, they leak out of him. Technically, Lipid is all goo though, and he could “melt” more of himself than the “leaky” areas, anywhere from the chest down. His “leaky” areas are on his hands/arms, parts of his back, and his face. In these areas, he can mold the goop however he wishes to, so he could make his hands/fingers like all spiny like or like medical tools since he doesn’t wanna contaminate other tools. Or he could grow makeshift goop wings or tentacles and the list kinda goes on as to what he can do with the goop. (also the goop can be molded with any hardness so it can be a flimsy kinda mold or it can feel like actual metal. don’t question the goop.)

He can’t mold his face though, that’s always stuck in a fox shape.

-originally Lipid was just a big wad of goo, but his patients got scared of him. so he ended up absorbing a rotting fox pelt and somehow he merged the dead cells in that with himself and bam he’s a fox (I know I just said he can’t change DNA but only in other things. he can play around with his own I guess, which is why the goop can maintain the properties it does)?

-oh and Ryx helped with his name uvu