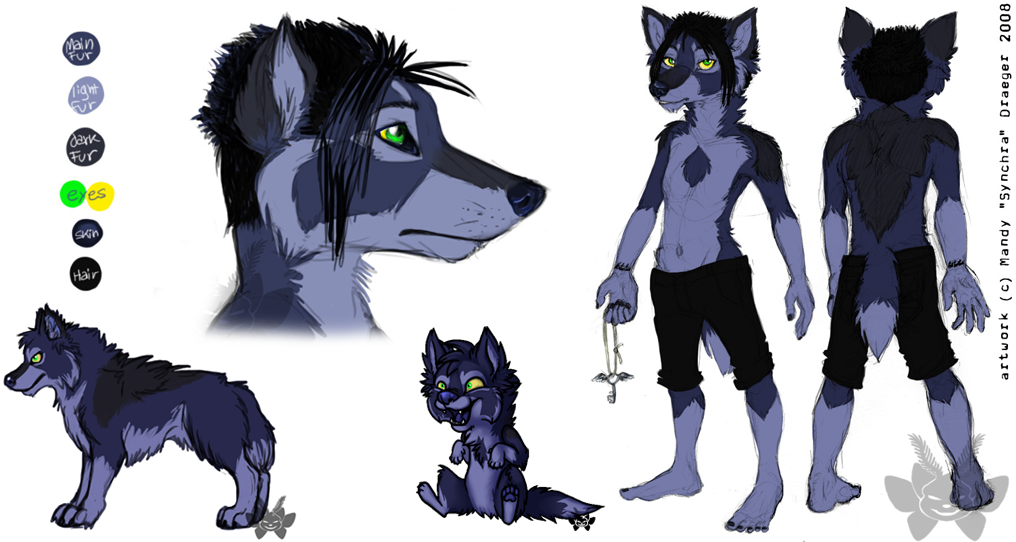 I have had this character since I was around 13 so he has actually appeared in so many alternate universes that there is tons of versions of him. I was really inspired by comics when I was little so I think that influenced his development a little too much! Here's the stories I have stuck to with him:

Werewolf Universe:
His human name is Shawn William Collins. He became a werewolf at the age of 16. His pack gave him the werewolf name "Chinterton". He was sort of a punk kid and still ages at a normal speed. He has a human form, a werewolf "light" form (seen above), a completely wolf form, and a monstrous full werewolf form where he cannot control his actions. He tries to stick in his werewolf "lite" form most of the time to quell the monstrous werewolf side of him. The more he stays human, the stronger the need to become a huge monster becomes. He is a very emotional character. He tries to think positively but has lots of bouts of depression from the taking the weight of the world upon himself. Anyway, I could talk forever about this AU and I think this is a good summary.

Ice Wolf Universe:
His name is only "Chinterton" in this universe. He is a part of a pack of wolves who live in the south pole in glacier like caves. They are so very camoflague with their surroundings because of their blue and white fur that no one knows they exist. They're slightly smaller than Gray Wolves, with more fluff, and smaller ears. Chinterton is a night hunter since he was born too dark to blend well in with his ice surroundings. He tends to end up alone a lot but doesn't mind it.

Angel/Demon Anthro Universe:
Oh god, this one is ridiculous, but it's the reason for his 777 tattoo. OKAY. So Chinterton was assigned to be Sync's guardian angel. He got upset about the lack of influence he could have on her life when things got really rough so he broke the rules and left heaven. When he fell he lost his wings and was banned from ever returning to heaven. He helps her through the rough time but as a result of falling from heaven, he slowly looses all his angelic powers and over the next 50 years slowly becomes a demon. (Because fallen angels become demons in this universe.) He runs off from Sync so as not to harm her while he starts transforming into a demon but his demonic form eventually takes him completely over. He is eventually killed during a horrible fight and ends up in hell.