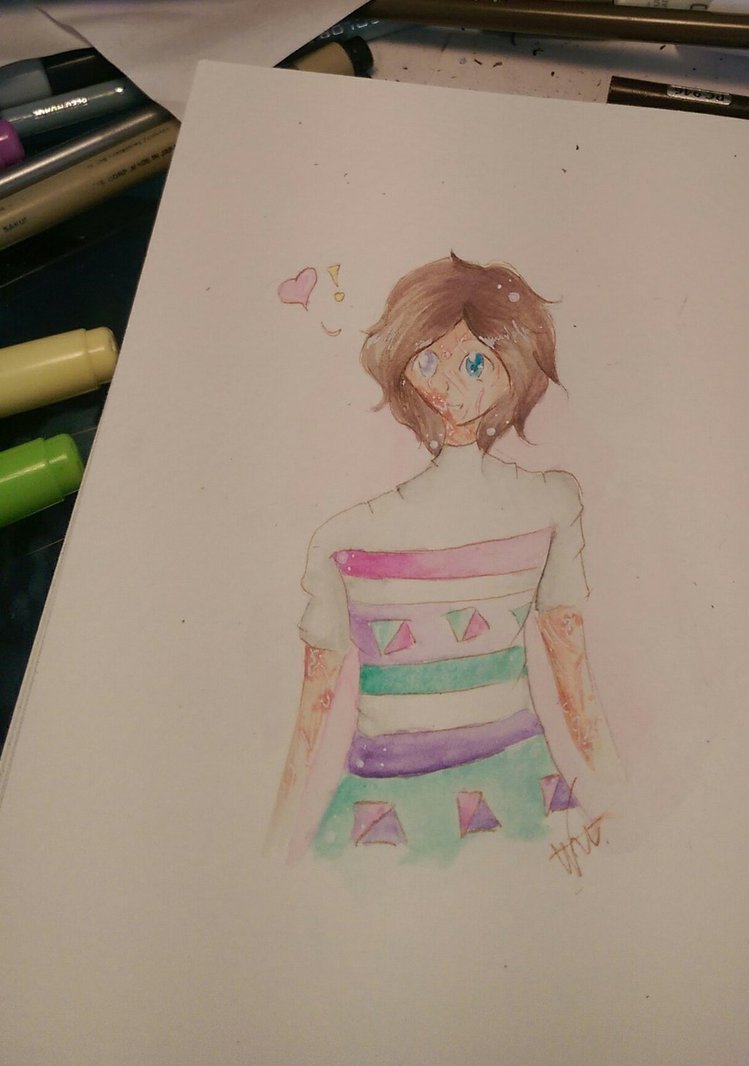 Build: Emaciated and on the tall end of average. Usually leaning to the left.

Hair Type: Chin length, usually parted down the middle but can be parted to either side. Not necessarily unkempt but has a distinctively scruffy appearance. Typically straight with an occasional slight wave.

Eye Type: Left is a vibrant blue, while his right is blinded and has a clouded, opaque appearance. Very wide.

Scars: Prominent, severe scarring covering the majority of his body, mostly on his face and arms. Thirteen scars on his face, including a large chemical burn starting on the right side of his jawline and running down his neck, chest, and arms. Deep scars wrapping around wrists, ankles, and neck.

Other: Missing all fingertips on his right hand, excluding the the thumb. Lower right leg and foot appear crushed and deformed, and he always keeps this leg slightly bent. He wears a support brace on his leg and he walks with a prominent limp, using a cane to help him walk.

Personality: At first, Ari is extremely shy and distrusting towards almost everyone and will likely freeze up and start shaking if anyone tries to approach him. However, when he does warm up to someone, he becomes very clingy and affectionate, and he obviously has no clear sense of social skills or boundaries and problems with attachment. He seems childish (and he is in many ways) or even a bit mentally delayed, although he is actually of above average intelligence.

Occupation: Employee at a bakery.

Sexual Orientation: Demiromantic Asexual. Seems attracted to both genders although nobody really knows.

Relationships with Other Characters:

David Quinn- David is the forensic science student who is essentially responsible for Ari's rescue. David would visit Ari every day when he was in the hospital, and while it took over a month for him to talk to him or even make eye contact, Ari eventually warmed up to him and became very attached. Eventually, when Ari was discharged, David realized he didn't have a place to go and he eventually let Ari move in with him. The two are the best of friends despite their very different personalities. He is very dependent on David and gets very clingy with him, and David more than willingly puts up with this and is very protective of Ari.

Ami Jordan- Ari's girlfriend. She was originally a friend of David's, and she met Ari after David invited her over to their apartment. While Ami was wary of Ari at first because of his strange appearance and reclusive personality, she eventually showed interest in a necklace Ari was making, and he gave it to her once it was finished. They later met again at Ari's workplace, and a romantic relationship ensued. While Ami is very romantic and flirtatious, Ari seems utterly lost when it comes to being in a relationship, and while he gets extremely cuddly with her he most commonly just mimics whatever she's doing.

Angelo D'Amato- Yet another friend of David's who met Ari through him, Ari and Angelo became very close after they started working together at the same bakery. As with most people, it took Ari a while to get used to him, although he warmed up to Angelo more quickly than with most people, and to this day he considers Angelo to be one of the only people who he can trust with everything.

Chris Jones- A hockey player at David's school, Ari and Chris met out of pure chance. He loved the idea of having Chris as a friend from the start, as he viewed him as sort of a bodyguard. Chris also taught Ari how to ice skate, which has not only been good for strengthening his bad foot but has also proven to be very fun for him. It's no secret that Chris has a crush on Ari, and the two are very cuddly with each other, although it's nothing romantic due to Ari already having a girlfriend.

Luca Bellevue- Another close friend of Ari's, the two also met out of chance. Both being very shy people, they opened up to each other quicker than they normally did, likely because of their similar appearances. In fact, they are very similar, right down to the fact that they both speak with stutters and work at bakeries. Like most of his friends, Ari is very clingy and touchy-feely with Luca.

He speaks with a severe stutter, and this gets worse when he's nervous, often to the point where he can't form proper sentences.