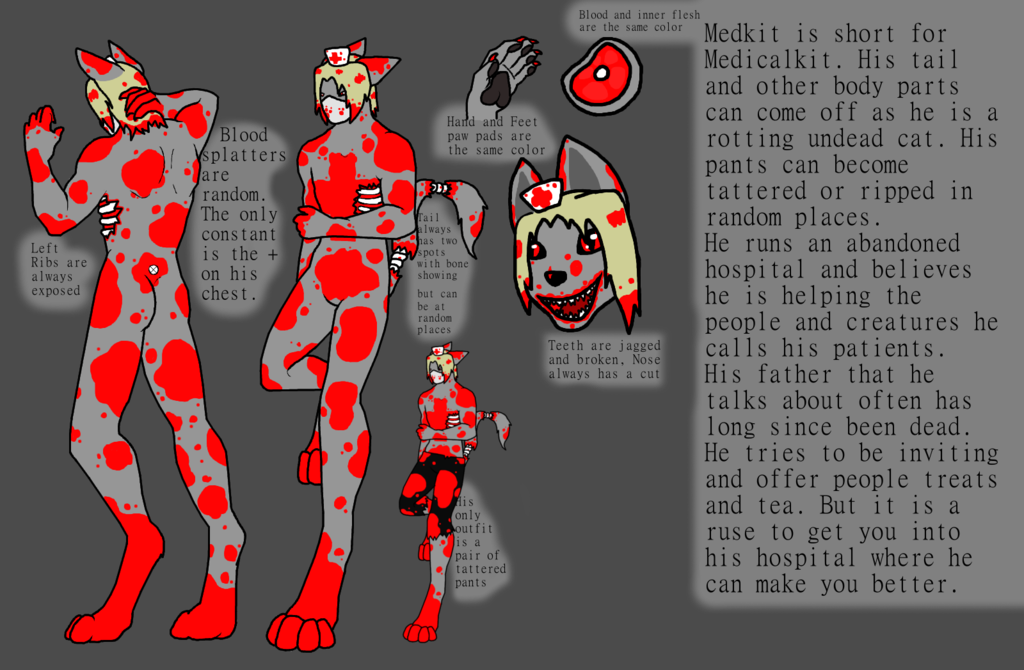 Occupation: Doctor
Significant other: N/A
Sexual Orientation: Asexual
Family:
-Father- deceased Doctor Jareth.
Friends: Maxwell
Attitude Toward Death: Everyone dies, but not everyone comes back
Religion/Beliefs: N/A
Philosophy of Life: It is his purpose in life to help others. Even if his help isn't wanted.

Personality/Attitude: One moment he is a smooth talker, the next cold and not in his mind.
Skills/Talents: Surgeries
Favourites/Likes: Dissection.
Most Hated/Dislikes: Escapees.

Goals/Ambitions: To create the 'ultimate' person.
Weaknesses: Talking about his father.
Hobbies/Interests: Making tea and tending to his patients.
Place/Type of Residence: An abandoned hospital that, except for him, has been empty for centeries. Most people forgot it even existed.

Painful memory: When the bad men came to take his father away.
Education: Only what Dr. Jareth taught him.

Backstory: Medicalkit was built from parts found by or collected from patients by Dr. Jareth with the purpose of helping him with his work. His work was to create a super being, and, in a since, he succeeded with Medicalkit, but that wasn't enough. He'd lurer people into their hospital with a trap waiting. He once led the wrong person to the hospital, as the police had caught on that when Dr. Jareth came to town, a person would go with him and never come back. They raided the hospital, taking Dr. Jareth with them. Once they were gone, Medicalkit lay low for about ten years before starting the work again. He still hears his father lecturing him if he does something wrong.

Old Bio:
Medical kit was brought to life by an unknown male whom he calls father. This man called himself a doctor and said what he did was to help people, and that they just never understood. However, what he did usually ended with the patients as corpses, and nothing ever seemed to actually be saving anyone.
He did work at a hospital, and it was closed due to malpractice, however the father stayed behind in the decaying hospital stealing homeless people and those who were unfortunate to be stranded in the woods alone.
He got tired of the loneliness and built MedKit to help break the silence and to have someone to continue his work when he was dead.
He was strict, and Medkit learned what he could from him, Eventually the police found out about his experiments and came for the father figure unaware of the undead feline hiding within the halls. Now, with a fresh pallet of patients, and an ever growing homeless community, Medkit continues. However the escapees are never believed, after all, who would expect a zombie cat to be real? Or at least sane people wouldn't believe it.
He often offers a warm meal to the homeless, though this meal of warm tea and small sandwich is laced with tranquilizers, and they wake to horrible pains.