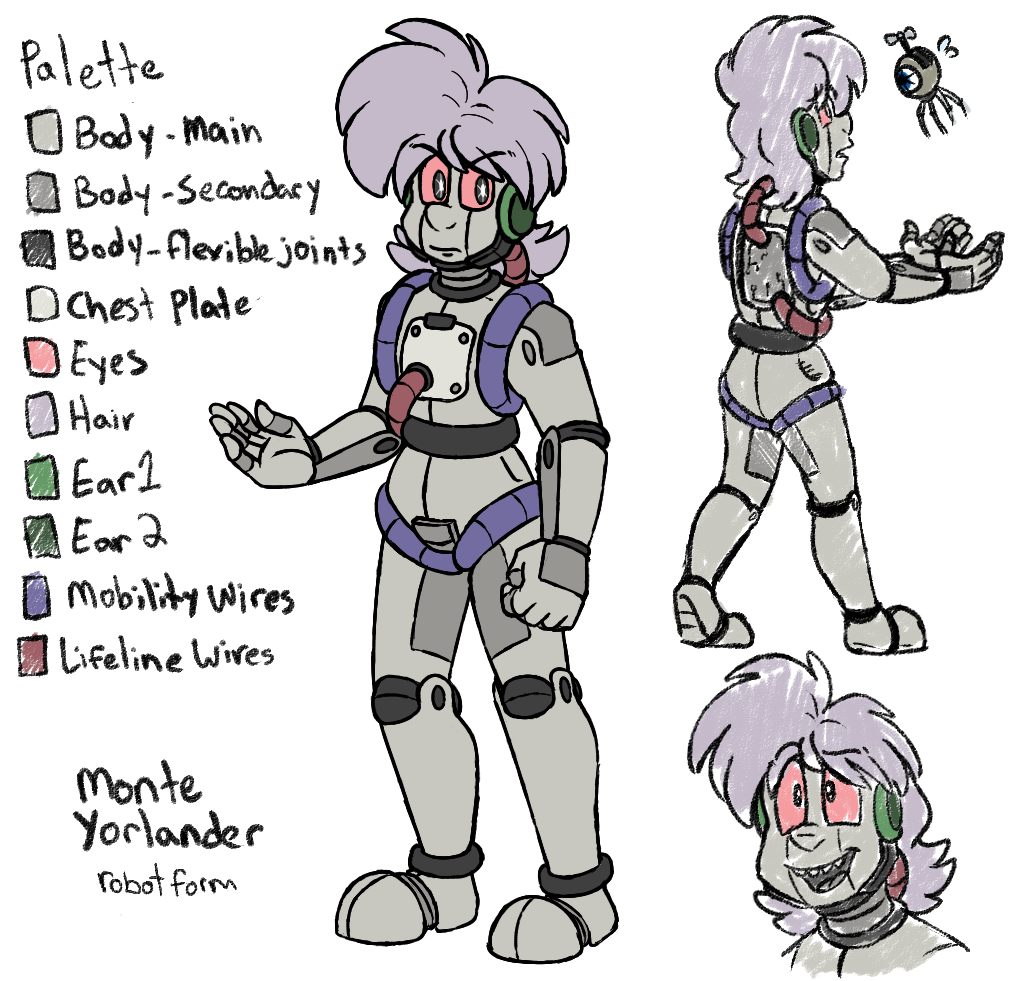 In his robotic body, Monte has a slim build supporting somewhat bulky limbs. He is short in height. His joints consist of ball-joints. Monte's feet are undetailed.

He has thick and fluffy lavender hair that is medium in length. He has a reddish pink sclera and his irises are grey with a white pupil that has 'splits', separating the iris into 6 parts. He has green auditory devices on the side of his face to serve as his ears. Monte has incredibly sharp and pointed teeth

Around his shoulders and hips are thick blue wires that help with body movement. He also has thick red wires coming from the base of his skull to his back that basically serves as an external spinal cord, and one coming from his back to his chest that moves 'blood' through is body into his heart.

As a human, he has a slim build and is short in height. He has thick reddish-orange hair that comes up to a spike. His eyes are green. He has patches of freckles on his face and all over his body. He is missing an upper right canine tooth. He has a slight upper-turned 'pug' nose.

Being born into a influential family, it appears from the outside that Monte grew up with all he needed. However he started becoming troubled leading up to and into his adolescence. Constantly causing arguments with his teachers, getting into physical fights at school and poor grades caused him to be expelled from several private schools, and without any other options was eventually placed into a public school, where his parents continually had to pay off school officials to allow him to stay. His younger sister, Sara, also transferred to the public school per request, wanting to stay close to her brother.

Feeling terrible for hurting his family so much, he reaches out to a school therapist for help. The school therapist contacts his parents and requests that Monte be seen by psychiatrist and perhaps be placed on medication. Monte's parents refuse, saying it's just hormones and a phase that he'll eventually get over. Monte feels devastated and betrayed, causing his mood to sink even lower. This event causes Monte to feel disdain towards his parents, and is something he has yet to forgive them for.

At age 15, Monte becomes infected with a man-made virus with a high mortality rate. With no cure available and the chance of recovery looking slim, Monte's parents allow for a risky and controversial procedure for his soul to be placed into a robotic prosthetic body and to place his human body into a deep freeze stasis while they wait on a cure. For this, Monte initially holds contempt over his parents for continuing his suffering and not simply letting him die.

Unfortunately, in a recovering war-torn world where such high technology is feared for possibly becoming weaponized, this means Monte is seen as a threat. While still recovering in the hospital, he is reported as being a potential threat. He is forcibly split from his family and exiled out of Roma, the largest city on the island of Isis. He is placed into another group of people who have been deemed potential threats in the process of being exiled. "Potential threats" include amputees with cybernetic prosthetics (cyborgs), people with various abnormalities and the chronically ill. They are all then thrown into the area surrounding the outside of Roma called "The Wilds", which contains wilderness, waste land and caravans of other exiled people.

Finding himself unable to mingle with other outlanders or join a caravan, Monte wanders the island alone. He eventually stumbles upon a secret underground bunker that had been abandoned but had previously been used for various scientific testing. He decides to stay here and to start using the bunker's equipment to see if he can do anything to help his situation out at all. He stays here in isolation for 4 years, only having other human contact when he disguises his body and leaves to gather supplies.

One day, a set of experiments that involved mad dogs are able to break free and escape from his compound. Monte runs after them to try to kill them off but is unable to do so before they attack a young woman who was wandering about outside. He eventually shoots the dogs dead, but they had already mauled the girl's arm quite badly, causing her to pass out from shock. In a panic, Monte picks up the girl and runs back into the underground compound.

Monte attempts surgery in order to save the girl's arm, but is unable to do so and must perform an amputation. He also notices that she appears to be blind in her right eye, but decides to not correct that since that did not occur due to any of her current injuries. He sets her up with a prosthetic cybernetic arm, takes care of her other wounds the best that he can, and waits to see if she will wake up or not.

Quite a few hours into her recovery, the girl awakens and immediately becomes frightened with her surroundings before she notices what has happened to her right arm, which drives in upset and anger even further. Monte's attempts to put her at ease fail miserably as she shouts abuse and physically fights him as much as she can in her poor condition, demanding that he leave her alone.

The girl eventually allows Monte to help her, realizing she needs it. She ends up telling him that her name is "Pompeii" but refuses to tell him anything else about her. Monte ends up taking care of her for a short time, helping her learn how to control her new prosthetic limb. He also offers to fix her blinded eye in some way, but Pompeii refuses.

Monte disregards this, engineering an eye attachment created out of gear which will allow Pompeii's blinded eye to have sight once again. Pompeii is amazed that not only she can fully see, but also that Monte chose to make this for her, despite her refusal and being so rude to him initially. She realizes that Monte genuinely is trying to help her and eases her defensiveness, if only slightly.

Once Pompeii had fully healed up, Monte tells her that she can leave at any time and go back to The Wilds. However, pained with guilt, he offers to let her stay with him and in exchange for working for him, he would keep her fed, sheltered and safe. She reluctantly goes with the offer, knowing well that caravaners and outlanders will now treat her poorly with suspect due to her now being a cyborg. This starts their rocky partnership.

After telling him a little bit about her past, Pompeii asks what Monte's story is. Fearing that telling the truth would lead to harm towards himself or his family, Monte begins his lie of being nothing more than a humanoid robot that was left in the bunker to conduct experiments and do engineering work. Pompeii initially seems suspect at this, but seems to accept the explanation.

Monte struggles immensely with having to suddenly socially interact with another person after years of forcibly isolating himself. This along with keeping up a huge lie about his life and with Pompeii continually starting arguments and heavily criticizing Monte does not do well for his mental health. He starts becoming increasingly irritable, which Pompeii notices, causing her to calm down her behaviour for his sake.

They slowly begin to trust each other more after some time. Monte "promotes" Pompeii from doing cleaning and grunt work, to helping him fix machinery around the compound as well as taking her out on supply gathering missions outside the bunker. Pompeii reciprocates by being kinder and eventually dropping her guard around him, though she does occasionally tease him for various things, a major one being giving him the nickname "Sooty" due to the letters S.U.T. being engraved into his back panel.

In the long run, the two become each other's close and only friend. Despite this, Monte struggles with wanting to tell her the truth about himself, fearing that if he mentions that he has been lying the entire time that Pompeii will reject him. At the time, he ultimately decides to not reveal the truth.

Jakob is very high up in an influential company, thus bringing home wealth to his family. His position however keeps him very busy and he doesn't get to be around his family as much as he'd like. He blames Monte's outbursts on just being teenager, citing that he himself once had a mean streak when he was around the same age and he grew up just fine.

Karla is a very sweet but slightly naive housewife. She is incredibly doting towards her children, finding it nearly impossible to punish them when needed. She finds it easier to ignore Monte's bad behaviour and respond to it with repeating overbearing praise for him.

Sara is Monte's younger sister by two years and the only family member he felt close to. Despite Sara feeling jealous and angry over Monte getting all the attention (albeit negative) from their parents, she still tries to help him with things. She is the one who convinces him that he is hurting the family and that he needs to talk to someone. At one point they were inseparable, Sara even transferring schools when Monte had to so she could stay by him, however things may have changed in the past few years...

The Good, The Bad and The Whatever: