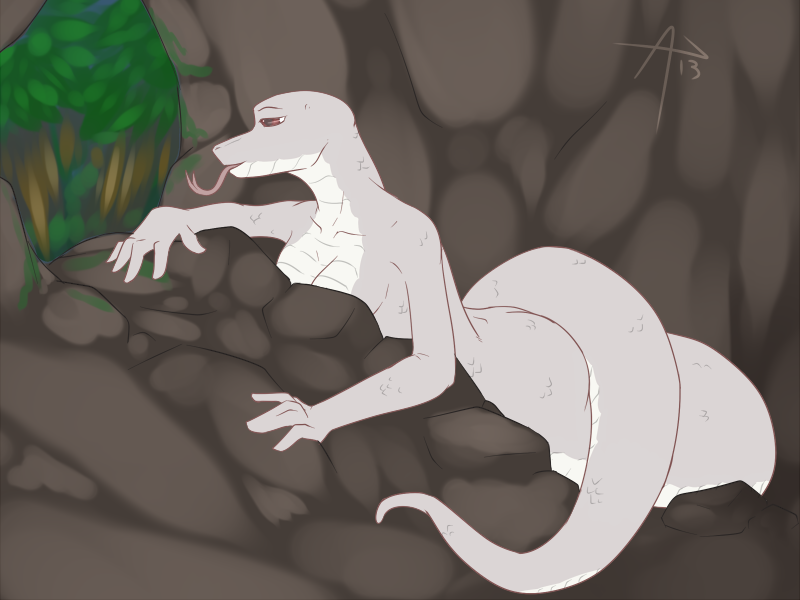 Once, Kodaku and her brother Rovdyr lived secluded lives in the wilderness, at the foot of the mountains in Alberta, near Unity Falls -before the city was built, even. They were both potent Psionic beings, levelling at a Class-5, and often used their powers for all kinds of activities, including those they shared with others: sometimes, they would seek companions for themselves, desiring the company of others, but were always peaceful, never harming anyone. Kodaku not only adjusted to the life, but enjoyed it; despite knowing how much her species was feared, her gentle nature could always find her a companion when she needed one.

But her brother, Rovdyr, was not so patient or gentle, failing to entice anyone to his companionship. Before long, he became impatient, and without the knowing of his sister, eventually began forcing people to submit to him. He enjoyed it, and continued his practices until Kodaku found out; her attempts to reason with him failed, as now the predatory urges of Rovdyr had taken hold of his mind, and he left, never to be seen again... until years later, when he began to use the pair's natural Psionic powers to lure people out to the forests and the mountains, where he could chase them or stalk them to their homes in remote towns, where he would bind them and do with them as he so pleased. Knowing he was out there doing this broke Kodaku's heart, and all attempts to stop him failed; though she was just a powerful a psychic as he, she was no warrior.

One day, a phoenix, mistaking her for Rovdyr after learning of the attacks in the forests, confronted her at her home. She soon managed to convince the phoenix she was not the cause of the attacks, and even helped Volcan, the Phoenix, find his favorite hunting ground, although Rovdyr remained as elusive as ever. She met Volcan again later, when apparently they had managed to lure out Rovdyr with the help of his friends, and successfully put an end to his reign of terror. She was heartbroken, and asked Volcan to stay with her that night to help her heal; the phoenix obliged her, and shared her bed that night, comforting her woes...

Kodaku has not yet appeared in this chapter