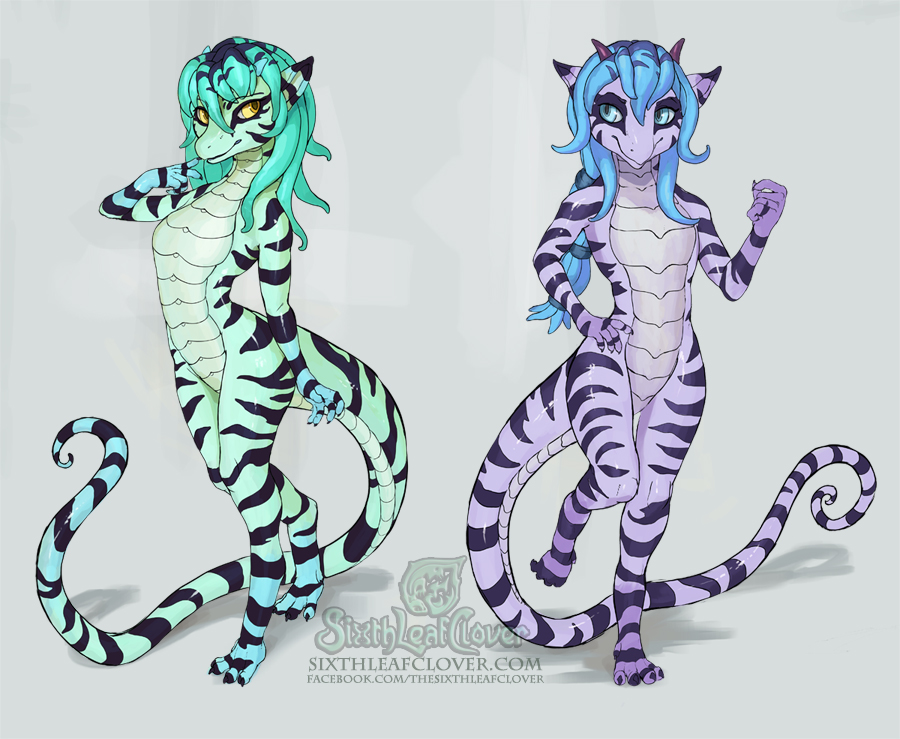 Reference sheet of my own character. Alice is the main form.

Synthetic silicon life-form. Body is covered in smooth shiny scales and there is no hair on any part of body. Ears are soft silicone, not fuzzy. She has a long tentacle mane which sometimes seem to just float enough to look as if it defies gravity itself. Each strand can move by will to touch and grab things.

Parts of the body can regenerate instantly if damaged or broken and look like new again.

Bones and joints don't distinctly pointing out around the body. The sleek/shiny scales to give an overall smooth and “wet”appearance.

Hands are thin razor sharp claws that are good for digging and grasping onto sides of things and climbing.

The tail can act as a whip or extra prehensile limb to grab or balance. Tail is twice as long as the body but is very lightweight.

Two protruding horns on head that are right above the ears.

Mouth is all blue and she has a long forked tongue.

Sometimes randomly wear clothing as a decoration even though it is not needed on a reptilian body. Ornamentation of stringy or lacey things and skimpy dresses. Also wears jewelry made from hand craft.

Her primary scale color is a light greenish aqua. Bottom half of arms and legs and tail tip are a light blue. Her belly and neck scales are a light white-green.

Body is covered in dark blue tiger stripes, except for underneath her belly and neck.

Her eyes are sensitive eyes of a lizard, but with round pupils.. they are a dim light-amber haze as if almost glowing. Night vision is available to use in order to see really dark places when exploring.

-She is accented with tiger stripes that glow bio-luminescent under right conditions.

-Can also turn invisible when holding her breath. The invisibility only lasts as long as breath can be held.

She lives in planet Shangri-La , a original world I created with silicon reptilian life form. The planet scenery is full of fungi, glowy things, and strange colored ambient atmosphere. Think of alice in wonderland. Sometimes dragon gods visit here but it is quite rare. The planet atmosphere consists of a ammonia based breathable layer to the strange reptilian life forms.