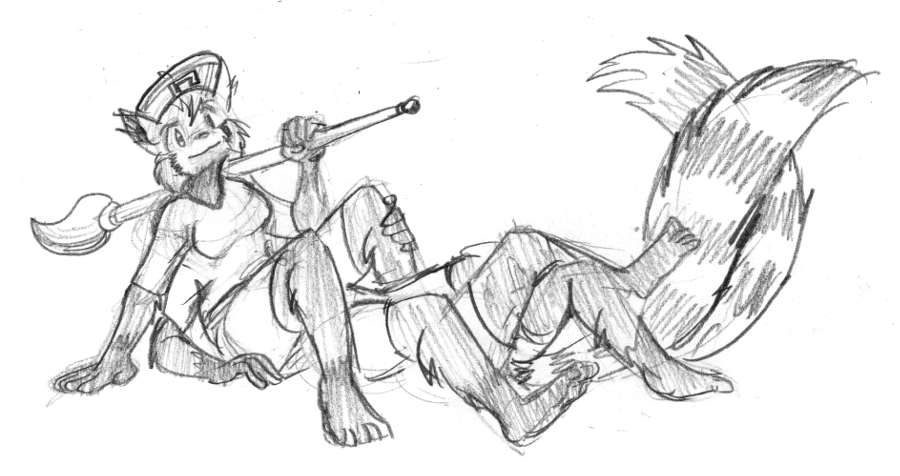 Simka Choi is an agent of the Cosmos Corps, an organization devoted to studying the relationships between different worlds, preventing them from ending if possible, and cleaning up the pieces afterward if not. She's part of the Prancer division, which handles that third task - Simka literally paints landscapes. The higher a world's population is, the less power her brush has; if she's in an uninhabitable void, she's nearly omnipotent, but her whole job is to get a place ready for new inhabitants to arrive, so it tapers off naturally.
She was a normal red-panda girl, years ago, until a strange accident left her floating in the Fringe, the space between worlds. A scout working for the Corps (Comet division, who patrol the void and monitor energy flows) discovered her floating and brought her in for examination - those who get exposed to Fringe energy too long end up changed in unpredictable ways. At first she seemed to just have earned a second pair of legs, but far stranger (to the Corps doctors who examined her) was that she had absolutely no trouble adapting to them. A few experiments later, and they figured out her actual power - she can instantly adapt to any shape she ends up in. Six legs or sixty, she'd move naturally with no interruptions.
Instead of taking their suggestions to join Dancer, though - she would've been a natural to infiltrate worlds in the shape of whatever happened to be native - she insisted on being an artist. She loved to paint, after all. Once they'd seen her work, the Corps agreed and let her join Prancer, where she stays to this day. She still returns home to visit her brother from time to time, but most of her time is spent out in blasted wastelands, patching holes in the sky and brushing rivers and lakes over the land.
Her body has continued to change gradually during all this - every five years or so, another pair of limbs appears, with the extra arms being the most recent. It doesn't cause must of an interruption in her work, apart from finding a new wardrobe, and her friends in the Corps have gotten used to seeing her in even stranger shapes from time to time.
Simka's personality is still playful and a little childlike; she knows she's good at what she does, and often can't resist putting a personal touch into her work. Simka likes to stay in touch with her friends, and makes heavy use of the Corps communicators and message networks - one of her greatest fears is to be truly isolated.