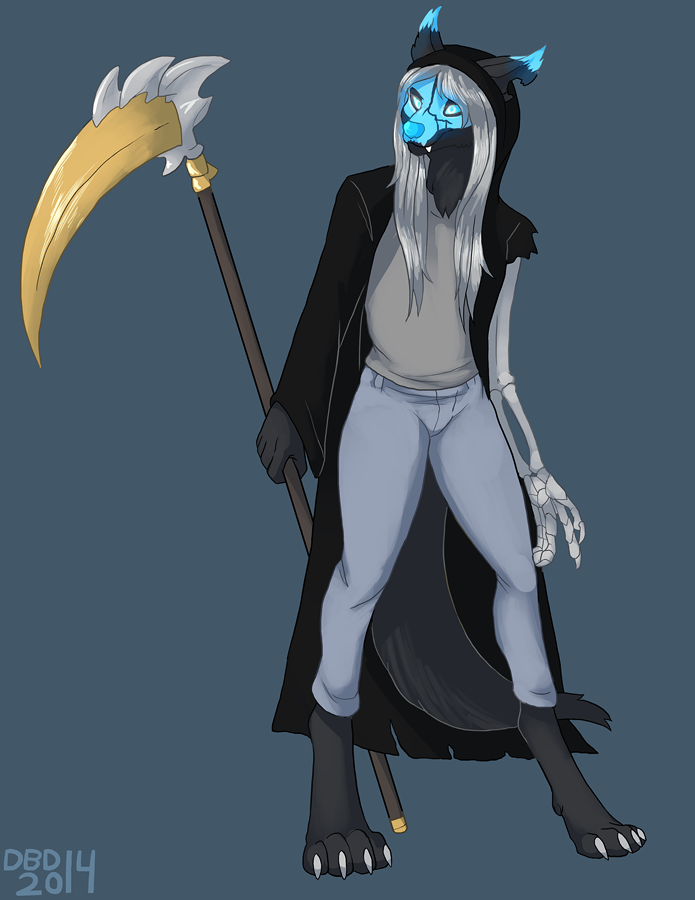 Grimswolf is a reaper, a soul manifest in vengeance and spite who can no longer leave the mortal plane due to unknown reasons or being bound or contracted. Grimswolf was once a wealthy land owner in the victorian period of great britian thus many people we jealous and sought his fortune. one day whilst riding to London on a horse and carriage he and his family where slaughtered in cold blood by robbers on the roadside. Left for dead and angry in the frost his spirit was offered a choice continue to the afterlife beyond in the unknown or be bound to this plane and reek vengeance on those who killed his family. He choose the later being reborn as a groteseque Canine Spirit filled with malice and hatred the more these negative emotions filled him the more powerful he became at the cost of his humanity. Grimswolf found the perpetrates , killed and devoured there souls, his job was done but he was left feeling hollow. Realising what he had become he was horrified he fled the scene and returned to his estate and isolated himself, for nearly 200 years he brooded on what he had done, the whispers of the dead haunting him a constant reminder of his past. during this time a great voice from the shadows issued him contracts, to slay and consume the souls of those who had brought injustice upon the world. it was a calling he could not resist for fear he might forget the reason why he is here. That changed when a strange creature arrived at his dilapidated estate. The genetically altered Valery came to the state in torn rags shivering in cold on the brink of been claimed by hypothermia, Grimswolf clothed her not so modest body fed her and gave her a place, in time they became good friends she was like a daughter to him which kindled a fire in Grimswolf had not felt in along time. he realised she needed alot of specialist care but he didn't mind infact Valery was a great help around the old house she got it clean and functional again intill with Grimswolf blessing she turned into a Parlour House for the locals to enjoy and fascinate themselves with the oddities the saw! it was to become the safe haven of those weird and wonderful creatures. Valery became the "head of the household" even though the house was still Grimswolf's Rightful home but he didn't mind he didn't mix with people well like she did so he hid himself away from the view of the public. All the while the voice from the shadows called to him.