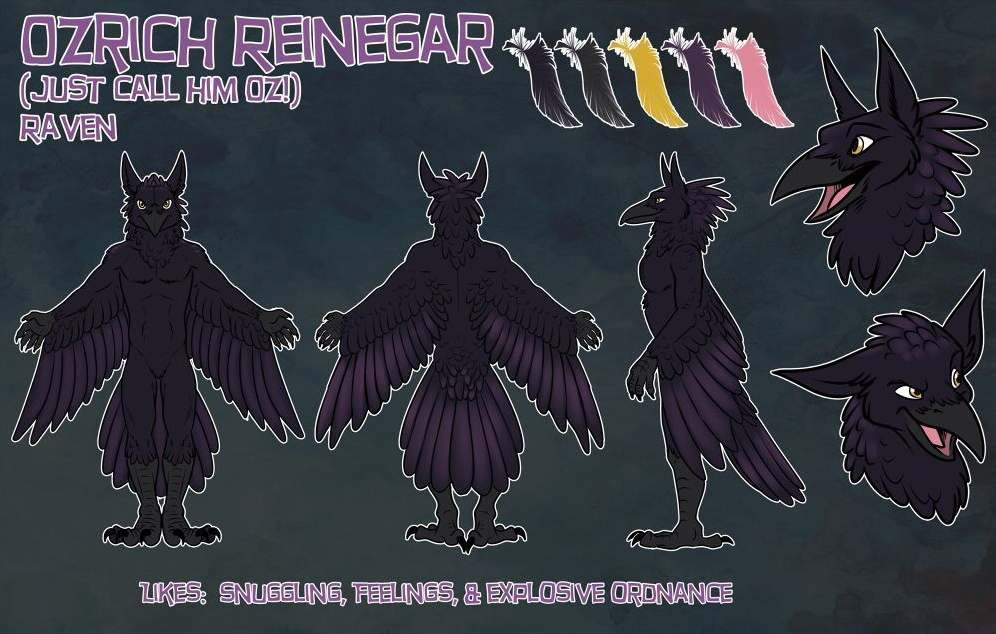 Ozrich (AKA. Ozzy) is a member of a Mystical Avian race known as the Quirren, whose culture and lore are largely tied to a fantasy world I once created, to save people reading a wall of text, this will only contain the physiological aspects of the species.

Quirren are an Avian, Anthropomorphic species, standing comparatively tall to an average human, male Quirren average a height of around 7'2" (~220cm), their female counterparts reaching heights of around 7'8" (~234cm). They have long and slim bodies, powerful legs and a formidable set of talons. They have very robust beaks, being very long, thick and straight, almost always seen in shades of smooth grey, potentially a devastating weapon in desperate situations. In addition, they have also posses a set of external ear lobes, a largely mammalian trait, their large ears provide them with excellent hearing.

The plumage of Quirren is typically very thick and heavy, most commonly seen in shades of black and purples, but also less common shades of Browns, Blues, Greys and even rarer so; whites have been observed. An unusual trait for Avian races, the plumage of female Quirren is much more decorated, having larger, sleeker crests, much longer wings and large, fan-like tail feathers.

As seen in the image of Ozzy, a rather regular male Quirren, the wings of the species are found along the underside of each arm. Through centuries of evolution, these wings are no longer used for flight, as modern Quirren are a primarily ground bound race, in rare cases, females with particularly large wingspans have shown feats of gliding and minor aerial acrobatics.

The Quirren are a highly intellegent race (With fully functioning social structures, Governments and Infrastructure in their 'homeworld'), however, weaker muscle structure and enhanced metabolisms mean most will only live to around 55 (Earth) years old at most.

In comparison to real world species, inspiration for this race was largely drawn from the Corvid family of birds, particularly the Raven, which is what I normally refer to Ozzy as, for simplicity.

Feel free to ask questions about these guys.

This turned into a wall of text anyway, lolz.