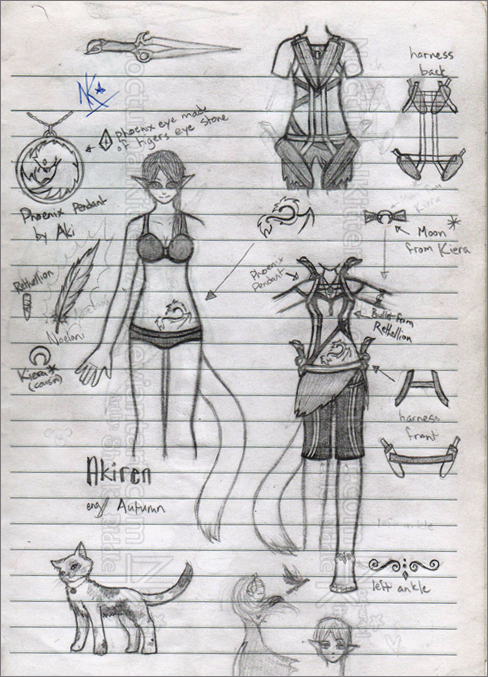 Her mother, Luna (https://www.weasyl.com/character/39645), was born an enchantress (which have a very elven form). Her father, Emiyot, was a human; a wizard and immortal due to his bond with an Enchantress, but human. However, Aki wasn't born naturally. Conceived naturally, yes, but she wasn't given her own body for a good 488 years as her body was killed while in the third month of her mother's pregnancy when Luna was turned into a vampire.

Aki's "soul" was saved from that early death and was drawn into her Great Grandmother, Kered (a high level enchantress and prophet), until it was old enough to understand the world around it (and until Kered could no longer keep it), then it was sent to share the body of Emi's long lost baby sister, Ammy's body until both were found one day by Luna who brought them home and built a shell for Aki to inhabit. Aki's soul was what gave the shell the characteristics it would have most likely had were she born naturally (including tiny tufts of black fuzz on the tips of her ears and a white tail from the neko spell on Luna), although her enchantress powers were incredibly stunted as a result of not having a physical form for so long, but being in an almost purely telepathic state for the whole time made her very sensitive to such powers.