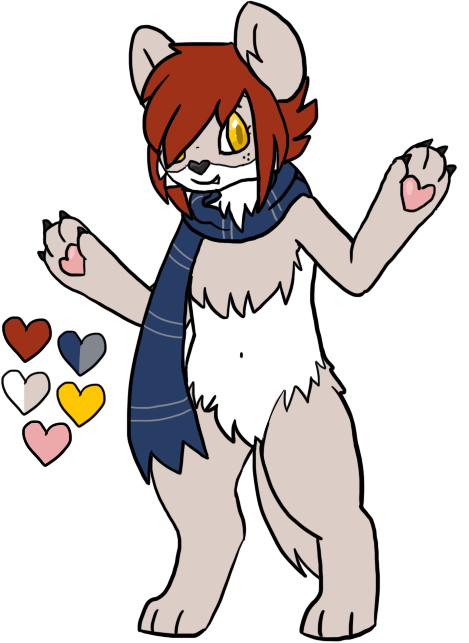 Russet is my fursona, a 19-year-old ferret girl.

She is very much like me in personality and habit: she loves scarves and blankets and stuff, generally anything that will keep her warm and cozy. Her scarf can have any design, it doesn't just have to be the one in this reference image. She's pretty shy and often anxious and has panic attacks. Some of her biggest fears are driving in the snow and wasps. Also vomiting.

I tend to draw her a few ways:
1. Like this; semi-anthro. Is more animal than human at this point, she doesn't have any notable curves or anything, and is generally more cartoony. Doesn't really wear clothes in this style except for her scarf, but exceptions can be made.
2. A sort of chibi form; she tends to be waaay smaller than normal with her scarf pretty over-sized. Super cute, generally drawn when I'm feeling lazy or it's just a silly picture.
3. Anthro. She generally has a more human-like body when I draw her like this; she usually has visible breasts and often is pretty chubby. Roughly 5'7" and 170lbs. Should be drawn wearing clothes, unless the picture is meant to be NSFW.

She is mated to a tiger-dog named Vincent. They are very happy together so do not try to roleplay dirty things with her.