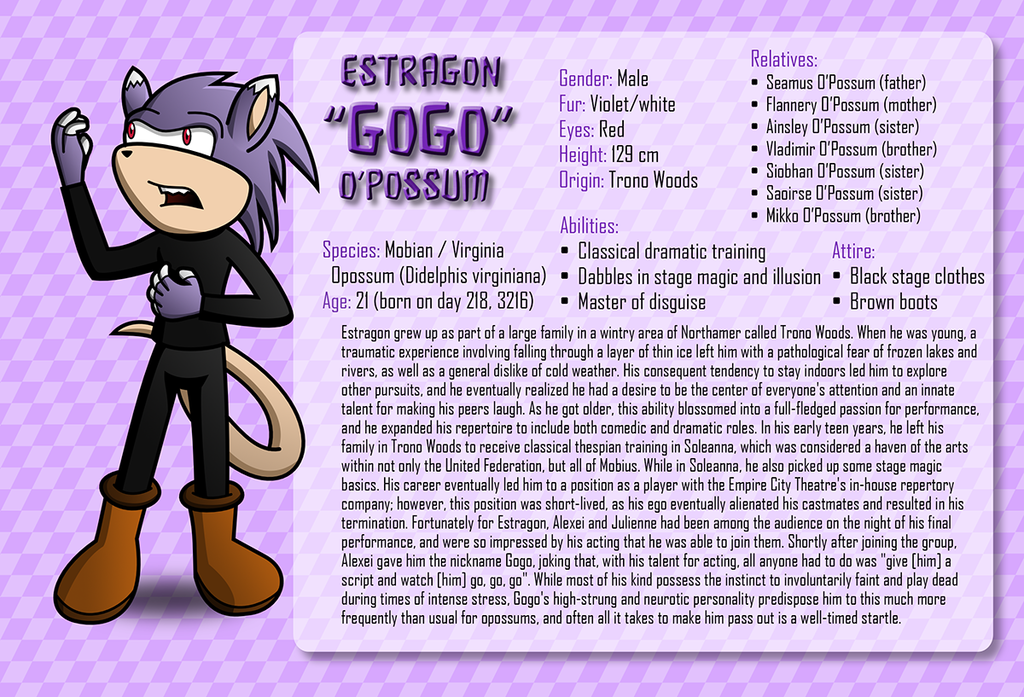 Estragon grew up in a wintry area of Northamer called Trono Woods. When he was young, a traumatic experience involving falling through a layer of thin ice left him with a pathological fear of frozen lakes and rivers, as well as a general dislike of cold weather. His consequent tendency to stay indoors led him to explore other pursuits, and he eventually realized he had a desire to be the center of everyone's attention and an innate talent for making his peers laugh. As he got older, this ability blossomed into a full-fledged passion for performance, and he expanded his repertoire to include both comedic and dramatic roles. In his early teen years, he left his family in Trono Woods to receive classical thespian training in Soleanna, which was considered a haven of the arts within not only the United Federation, but all of Mobius. While in Soleanna, he also picked up some stage magic basics. His career eventually led him to a position as a player with the Empire City Theatre's in-house repertory company; however, this position was short-lived, as his ego eventually alienated his castmates and resulted in his termination. Fortunately for Estragon, Alexei and Julienne had been among the audience on the night of his final performance, and were so impressed by his acting that he was able to join them. Shortly after joining the group, Alexei gave him the nickname Gogo, joking that, with his talent for acting, all anyone had to do was "give [him] a script and watch [him] go, go, go". While most of his kind possess the instinct to involuntarily faint and play dead during times of intense stress, Gogo's high-strung and timid personality predispose him to this much more frequently than usual for opossums, and often all it takes to make him pass out is a well-timed startle.