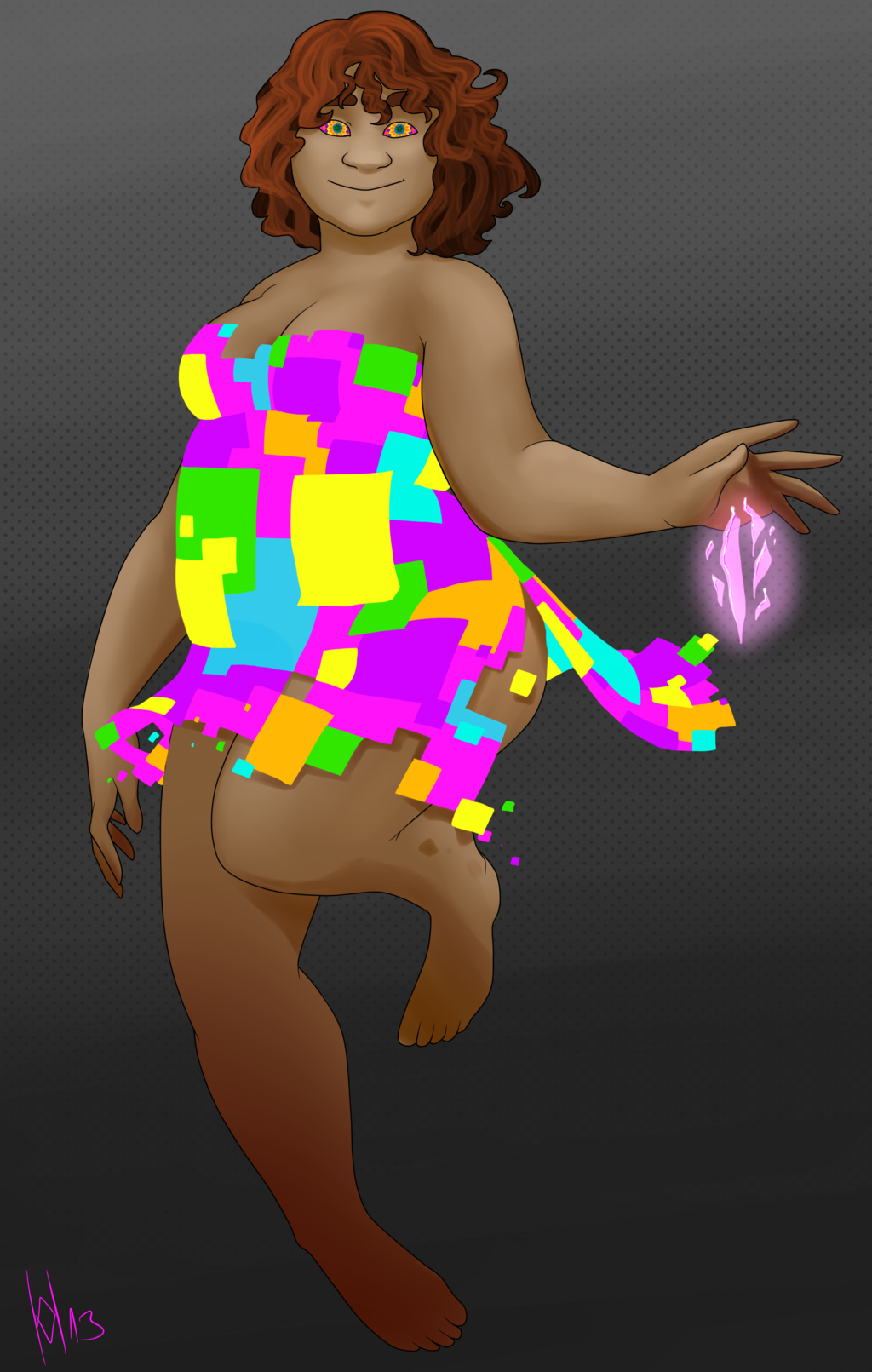 (Part of the Godmode AU spawned by the Artists At The Ready tournament.)

Once she was a common mortal woman, but haunted, as she put it, by her sturdy heart, which “cracked and cracked but did not break”. Basically she felt as if only after reaching breaking point she could finally start over and recover from what might have been depression, or maybe just an incredible amount of stress weighing on her.
When she made the mistake to bump into Whim, The Primordial Judge and God of petty and impulsive decisions, he offered to take care of that, planning to suck up to Krystal a little to make use of being in her favor later. It completely backfired when the Goddess of Heartbreak expressed her anger at a human entering her domain without her explicit permission by breaking not only Myriads heart - but the whole person along with it, as if she was made of glass.
Whim of course got the fuck out of dodge before she could do the same to him.

However, Krystal was surprised to discover that the tiny shards and pieces the young mortal had broken into started to gravitate towards each other, and to find back together. It was because one of the pieces of her own heart had ended up among them, blessing (or cursing?) the human with the powers of a deity.
Intrigued, the Goddess watched as Myriad put herself back together for the first time, and started plucking hurtful memories and feelings out of herself right away, enjoying the ability to get rid of them. Krystal immediately saw potential to use Myriads abilities for revenge on the other gods who had treated her so badly, and let the newborn entity go - waiting patiently for the day when she can reap what she has sown.

Weirdly enough, the offspring of the grumpy Whim and the cruel Krystal is a cheerful, gentle being, and always willing to offer help and support as much as she can, as well as very affectionate. Myriad tends to wander and float around aimlessly, sometimes in one piece, sometimes split up partially or wholly into many small particles, which travel together almost like a swarm of insects. Parts of her keep “falling off”, just to hurry and catch up with her again, and her appearance is not always the same, as she sometimes picks up pieces of other life forms or objects to wear them for a while. So she might appear with the trunk of an elephant or the petals of flowers some day, just to parade an extra pair of eyes around the next.
She also likes to collect things, mostly because lost and missing pieces tend to gravitate towards her, to the point of inexplicably popping up around her. More often than not, she finds new, different or even the original units those pieces belong to later, which she can add them to.

Her basic powers are mainly breaking things apart and putting them back together, including herself. She can break up even immaterial concepts like memories and laughter, and put them - or new ones - together as well. The exact limitations, rules and “blueprints” of these processes are a mystery even to herself, and she can only use these powers competently when she follows her gut feeling instead of thinking too hard about it.
She also has a knack for finding missing pieces, as mentioned above, but also good replacements for them. It might even seem as if those things seek her out by their own volition. And she can detect Whim and Krystal pretty much when and wherever she wishes to, since they are, in a way, pieces missing from her/units she is split off from.

Of course Myriad cannot just shatter anything easily. Sentient beings can put up resistance against her powers.

Her realm is a breathtakingly beautiful place, reminiscent of the inside of a kaleidoscope - just like her everchanging eyes. Colorful shards float around in it everywhere, and touching them can grant the one who does it the experience connected to the respective piece they represent. However, the beauty comes with a price - it’s in the nature of Myriads realm that it breaks apart everything in it, with the exception of Myriad herself. The shards in it all are either missing pieces that found her - or unfortunate objects and beings that remained in her realm for too long and where shattered by it. This is one of the reasons for why she rarely stays in it for long, it’s just too lonely and empty for her taste.

The other reason lays deeply within the realm, in a cage created by Whim - the only kind that could hold it. It is a hideous creature created from everything Myriad rejected about herself - sad or painful memories, despicable or undesired emotions, thoughts she never wished to think… Whenever those get too much for her - and that might happen quickly - she shatters herself and adds those shards to the creature to relieve herself of them. Despite her comparably short life as a goddess, this has already made the creature quite impressive. If it were to break out, it would - like all missing pieces - seek her out quickly and probably overwhelm her completely with negativity, turning her into a destructive force.
Which is exactly what Krystal hopes for.

Due to the fact that she pretty much rips negative pieces out of herself - and often replaces them with things she finds more desirable from the shards within her realm - she may not only appear scatterbrained, but might outright forget interactions and people as a whole, or come up with memories that are not even her own.
This prevents her from making experiences, which in turn leads to her being very easy to manipulate and sometimes bordering on stupidity. To people like Whim, that makes her a useful tool, to others, it makes her dangerous despite her friendly and loving nature. Because one can never be sure if she is leading them into a dangerous situation because she made herself forget about the risks, or if she is currently being a part of the machinations of some other being. It doesn’t help that from the two people she feels most attached to - Whim and Krystal - she gets little more than rejection, so she is craving attention and love.

Her personality is quite bubbly, but at times she can say surprisingly thoughtful little things - and she is always willing to listen to others, being curious and open about and to pretty much everyone she meets.